The universe was created by Almighty God. According to Science About 400 million years after the Big Bang, the universe began to emerge from the cosmic dark ages during the epoch of reionization, The Quran says that the heavens and the Earth were meshed together, tight and compact.

📖Quran:21:30
Have those who disbelieved not considered that the heavens and the earth were a joined entity, and We separated them and made from water every living thing? Then will they not believe?

The big bang is how astronomers explain the way the universe began. It is the idea that the universe began as just a single point, then expanded and stretched to grow as large as it is right now—and it is still stretching!

Read more: What Is the Big Bang?

The universe has been expanding ever since the Big Bang.

📖Quran 51:47
We built the universe with ˹great˺ might, and We are certainly expanding ˹it˺ 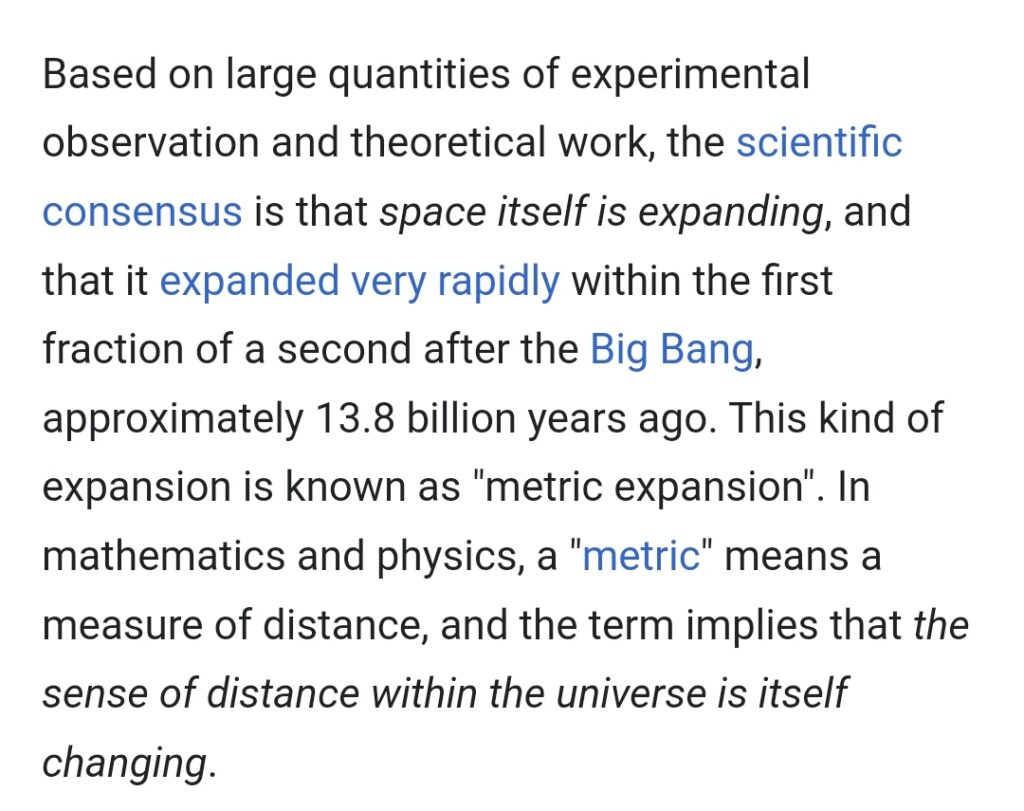 Primordial Smoke After the Big Bang

📖Quran: 41:11
Then He directed Himself to the heaven while it was smoke and said to it and to the earth, “Come [into being], willingly or by compulsion.” They said, “We have come willingly.

Read More: How the Early Universe Cleared Away the Fog

The Future of the Universe

📖Quran 75:3-12
Does man think that We will not assemble his bones? Yes. [We are] Able [even] to proportion his fingertips. But man desires to continue in sin, He asks, “When is the Day of Resurrection?

📖Quran 69:13-
Then when the Horn is blown with one blast, And the earth and the mountains are lifted and leveled with one blow – Then on that Day, the Resurrection will occur, And the heaven will split [open], for that Day it is infirm, And the angels are at its edges. And there will bear the Throne of your Lord above them, that Day, eight [of them], That Day, you will be exhibited [for judgement]; not hidden among you is anything concealed.

📖Quran 82:1-2 | Quran 81:1-3
When the sky breaks apart – And when the stars fall, scattering – When the sky has split [open] And has responded to its Lord and was obligated [to do so] And when the earth has been extended.

📖Quran 70:6-9
Indeed, they see it [as] distant, But We see it [as] near, On the Day the sky will be like murky oil, And the mountains will be like wool, i.e., in the process of disintegration.

📖Quran 36:76-77
Does man not consider that We created him from a [mere] sperm-drop – then at once he is a clear adversary? And he presents for Us an example and forgets his [own] creation. He says, “Who will give life to bones while they are disintegrated?”

📖Quran 36:79-83
Say, “He will give them life who produced them the first time; and He is, of all creation, Knowing – [It is] He who made for you from the green tree, fire, and then from it you ignite. Is not He who created the heavens and the earth Able to create the likes of them? Yes, [it is so]; and He is the Knowing Creator. His command is only when He intends a thing that He says to it, “Be,” and it is.

📖Quran 36:83
So exalted is He in whose hand is the realm of all things, and to Him you will be returned.

📖Quran 14:49-51
And you will see the criminals that Day bound together in shackles, Their garments of liquid pitch and their faces covered by the Fire. So that Allah will recompense every soul for what it earned. Indeed, Allah is swift in account.

📖Quran 79:6-14
On the Day the blast [of the Horn] will convulse [creation], There will follow it the subsequent [one], Hearts, that Day, will tremble, Their eyes humbled, They are [presently] saying, “Will we indeed be returned to [our] former state [of life]? Even if we should be decayed bones? They say, “That, then, would be a losing return.” Indeed, it will be but one shout, And suddenly they will be [alert] upon the earth’s surface.

Releted : What will happen on the Day of Judgement according to Islam?

What is the Shape of Universe ?

Reference : Shape of the Universe

The Big Crunch: The End of Our Universe?

It tells us that the Universe’s expansion, which is due to the Big Bang, will not continue forever. Instead, at a certain point in time, it will stop expanding and collapse into itself, pulling everything with it until it eventually turns into the biggest black hole ever. Well, we all know how everything is squeezed when in that hole. Hence the name Big Crunch.

Read More : The Big Crunch: The End of Our Universe?

In the Quran God promises to make the Big Crunch

📖Quran 7:187
They ask you, [O Muhammad], about the Hour: when is its arrival? Say, “Its knowledge is only with my Lord. None will reveal its time except Him. It Weight heavily upon the heavens and the earth. It will not come upon you except unexpectedly.” They ask you as if you are familiar with it. Say, “Its knowledge is only with Allah , but most of the people do not know.

This Big Crunch will begin and end before you can blink

📖Quran 16:77
And to Allah belongs the unseen [aspects] of the heavens and the earth. And the command for the Hour is not but as a glance of the eye or even nearer. Indeed, Allah is over all things competent.

After this Big Crunch is over, God promises in Quran Verse 21:104 to recreate those heavens and Earth once more before Judgment Day.

📖Quran 14:48
[It will be] on the Day the earth will be replaced by another earth, and the heavens [as well], and all creatures will come out before Allah , the One, the Prevailing.

📖Quran 36:81:83
Sahih International
Is not He who created the heavens and the earth Able to create the likes of them? Yes, [it is so]; and He is the Knowing Creator, His command is only when He intends a thing that He says to it, “Be,” and it is, So exalted is He in whose hand is the realm of all things, and to Him you will be returned.

Reference : What is The Big Bounce Theory ?

How the Big Rip could end the world ?

If the Big Rip theory is correct, one day we could reach a moment when planets and everything on them will be torn apart. Then the atomic and molecular forces will be ripped open, electrons splitting from atoms, all the way down to the quarks and anything smaller. But until then, check out his video for more on the Big Rip

Reference: How the Big Rip could end the world ?

What is the Big Freeze ?

The Big Freeze, which is also known as the Heat Death, is one of the possible scenarios predicted by scientists in which the Universe may end. It is a direct consequence of an ever expanding universe. The most telling evidences, such as those that indicate an increasing rate of expansion in regions farthest from us, support this theory. As such, it is the most widely accepted model pertaining to our universe’s ultimate fate. The term Heat Death comes from the idea that, in an isolated system (the Universe being a very big example), the entropy will continuously increase until it reaches a maximum value. The moment that happens, heat in the system will be evenly distributed, allowing no room for usable energy (or heat) to exist – hence the term ‘heat death’. That means, mechanical motion within the system will no longer be possible.

Is science 100% certain that one Day this will happen?

Scientists do not know their own destiny, which they found after their research, they are only sharing their thoughts on the basis of research, according to them it is most possible that it could happen, whereas we believe what God told us on Quran so this is the final declaration from almighty God that everything going to end one day.