From now on you must circumcise every baby boy when he is eight days old, including slaves born in your homes and slaves bought from foreigners.

“This will show that there is a covenant between you and me.” Each one must be circumcised, and “this will be a physical sign to show that my covenant with you is everlasting.” Any male who has not been circumcised 👉 will no longer be considered one of my people👈, because he has not kept the covenant with me.” [Genesis 17 : 9]

On that same day Abraham obeyed God and circumcised his son Ishmael and all the other males in his household, including the slaves born in his home and those he had bought. Abraham was ninety- nine years old when he was circumcised, and his son Ishmael was thirteen. They were both circumcised on the same day, together with all Abraham’s slave. (Genesis 17 : 26)

The boy was born at the time God had said he would be born. Abraham named him Isaac, and when Isaac was eight days old, Abraham circumcised him as God had commanded.
(Genesis : 21: 2- 4)

‘My heart is praises the Lord; my soul is glad because of God my Saviour, for he has remembered me his lowly “servant”……

Prophet John was circumcised:-
When the baby was a week old, they came to circumcise him, and they were going to name9 Zechariah, after his father. But his mother said, “No! His name is to be John.”
(Luke 1 : 59)

Prophet Jesus was circumcised:-
A week later, when the time came for the baby to be circumcised, he was named Jesus, the name which the angel (Gabriel) had given him before he had been conceived. (Luke 2 : 21)
———————————–

[ Note : The Muslims are the only largest single group in the world who practice circumcision]

The Prophet Muhammad peace be upon him said: “Five practices are characteristics of the Fitra: circumcision, shaving the pubic region, cutting the moustaches short, clipping the nails, and depilating the hair of the armpits”

Say (O Prophet Muhammad): “Whoever is an enemy to Gabriel (let him die in fury), for indeed he has brought it (this Qur’an) down to your heart by Allah’s permission, confirming what came before it (Torah and the Gospel etc.) and guidance and glad tidings for the believers. 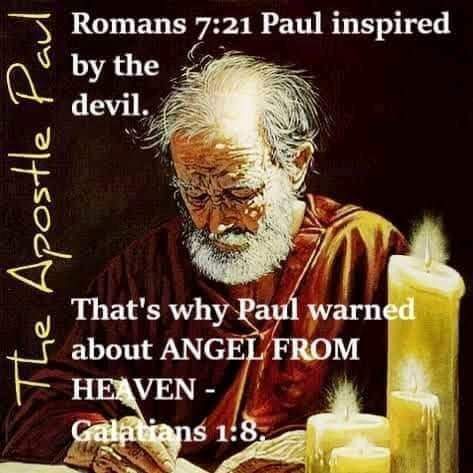 Here 👉 Antichrist Paul ( Paul, who called himself Apostle to the Gentiles, attacked the practice, though not consistently. In the case of Timothy, whose mother was Jewish Christian but whose father was Greek, he personally circumcised him “because of the Jews” that were in town.] Acts 16:1–3
He also appeared to praise its value in Romans 3:1–2 )

What said Paul about the law of God 👇 ( Christian God Paul )

It is for freedom that Christ has set us free. Stand firm, then, and do not let yourselves be burdened again by a yoke of slavery. Mark my words! I, 👺Paul, tell you that if you let yourselves be circumcised, Christ will be of no value to you at all. Again I declare to every man who lets himself be circumcised that he is obligated to obey the whole law. You who are trying to be justified by the law have been alienated from Christ; you have fallen away from grace. For through the Spirit we eagerly await by faith the righteousness for which we hope. For in Christ Jesus neither circumcision nor uncircumcision has any value. The only thing that counts is faith expressing itself through love. ( Galatians 5:12)