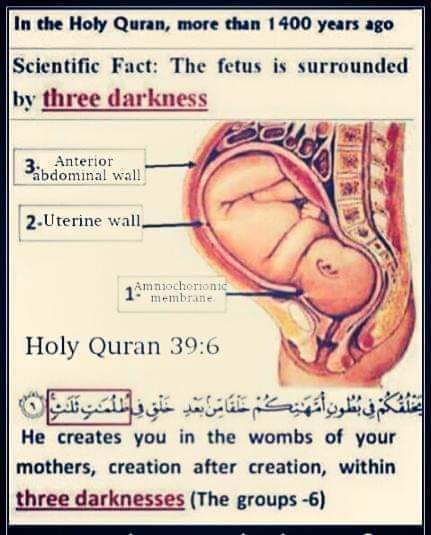 He Created you in the wombs of your mothers, creation after creation in three veils of darknesses, such is Allah your Lord. His is the Kingdom, There is no god but He. How then are you turned away?
(Qur’an 39 : 6)

Indeed, We have created man (Adam) out of an extract of clay (water and earth).

Thereafter We made him (the offspring of Adam) as a Nutfah’ (mixed drops of the male and female discharge) and lodged it in a safe lodging (womb of the woman).

Then we made the Nutfah’ into a Alaqah’ (Leech like substance), then We made the clot into Mudgah’ (Chewed lump), then We made out of that little lump of flesh bones, then We clothed the bones with flesh, and We brought it forth as another creation. So blessed be Allah, the Best of Creators.
(Qur’an 23 : 13 – 14)

And that He (Allah) creates the pairs, – male and female,

Did We not create you from a fluid of no value?

For a known period (determined by gestation)?

Be cursed (the disbelieving) man! How ungrateful he is!

From what thing did He create him?

From Nutfah (Drops of semen) He created him, and then set him in due proportion;

” He Created you in the wombs of your mothers, creation after creation in three veils of darknesses.”

This statement is from Sura 39:6. We do not know when it was realized that human beings underwent development in the uterus (womb), but the first known illustration of a fetus in the uterus was drawn by Leonardo da Vinci in the 15th century. In the 2nd century A.D., Galen described the placenta and fetal membranes in his book “On The Formation of the Foetus.” Consequently, doctors in the 7th century A.D. likely knew that the human embryo developed in the uterus. It is unlikely that they knew that it developed in stages, even though Aristotle had described the stages of development of the chick embryo in the 4th century B.C. The realization that the human embryo develops in stages was not discussed and illustrated until the 15th century.

After the microscope was discovered in the 17th century by Leeuwenhoek descriptions were made of the early stages of the chick embryo. The staging of human embryos was not described until the 20th century. Streeter (1941) developed the first system of staging which has now been replaced by a more accurate system proposed by O’Rahilly(1972).

“The three veils of darkness” may refer to:
(l) the anterior abdominal wall;
(2) the uterine wall; and
(3) the amniochorionic membrane
…

This statement is from Sura 23:14. The word “alaqah” refers to a leech or bloodsucker. This is an appropriate description of the human embryo from days 7-24 when it clings to the endometrium of the uterus, in the same way that a leech clings to the skin. Just as the leech derives blood from the host, the human embryo derives blood from the decidua or pregnant endometrium. It is remarkable how much the embryo of 23-24 days resembles a leech. As there were no microscopes or lenses available in the 7th century, doctors would not have known that the human embryo had this leech-like appearance. In the early part of the fourth week, the embryo is just visible to the unaided eye because it is smaller than a kernel of wheat.

Then of that leech-like structure, We made a chewed lump.”This statement is also from Sura 23:14. The Arabic word “mudghah” means “chewed substance or chewed lump.” Toward the end of the fourth week, the human embryo looks somewhat like a chewed lump of flesh. The chewed appearance results from the somites which resemble teeth marks. The somites represent the beginnings or primordia of the vertebrae.

How could Prophet Muhammad have possibly known all this 1400 years ago, when scientists have only recently discovered this using advanced equipment and powerful microscopes which did not exist at that time?

The only reasonable conclusion is: these descriptions were revealed to Prophet Muhammad from the Lord. He could not have known such details because he was an illiterate man with absolutely no scientific training.”

And indeed We have fully explained to mankind, in this Qur’an, every kind of similitude, but most mankind refuse (the truth and accept nothing) but disbelief.

“THIS IS THE TRUTH FROM YOUR LORD, SO BE NOT OF THOSE WHO DOUBT.”

“WE WILL SHOW THEM OUR SIGNS IN THE UNIVERSE, AND IN THEIR OWN SELVES until it becomes manifest to them that this QUR’AN IS THE TRUTH. Is it not sufficient in regard to your Lord that He is a Witness over all things.”