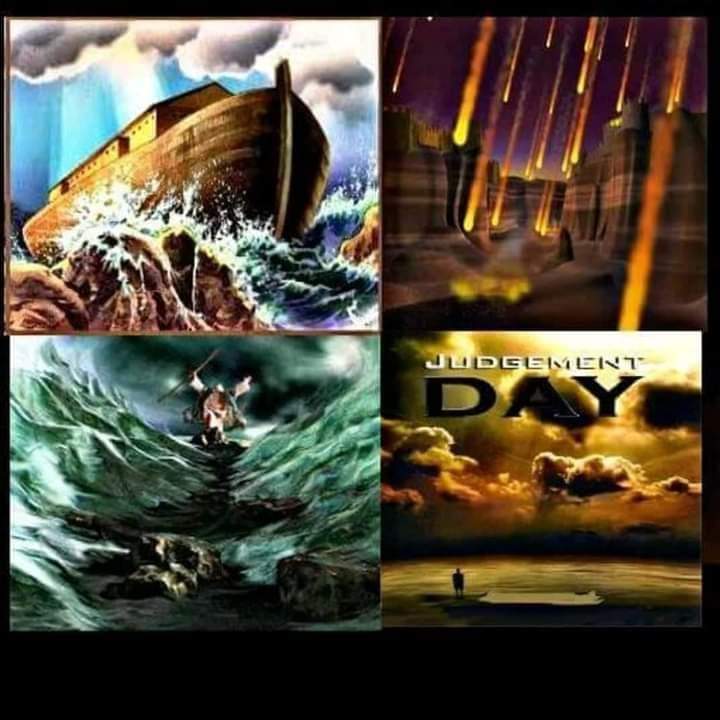 O Children of Adam! If there come to you Messengers from amongst you, reciting to you, My Verses, then whosoever becomes pious and righteous, on them shall be no fear, nor shall they grieve.

But those who reject Our Ayat (proofs, evidences, verses, lessons, signs, revelations, etc.) and treat them with arrogance, they are the dwellers of the Hell-Fire, they will abide therein forever.

Indeed, We sent NOAH to his people and he said: “O MY PEOPLE! WORSHIP ALLAH! You have no other Ilah (God) but Him. None has the right to be worshipped but Allah. Certainly, I fear for you the torment of a GREAT DAY!”

The Leaders of his people said: “Verily, we see you in plain error.”

Noah said: O my people! There is no error in me, but I am a Messenger from the Lord of the world and all that exists.

I convey to you the Messages of my Lord and give sincere advice to you. And I know from Allah what you know not.

But they disbelieved him, so We saved him and those along with him in the ship, and We drowned those who disbelieved our Ayat (proofs, evidences, lessons, signs, revelations, etc.). They were indeed a blind people.

And remember ABRAHAM when he said to his people: “WORSHIP ALLAH ALONE, AND FEAR HIM, that is better for you if you did but know.

“YOU WORSHIP BESIDES ALLAH ONLY IDOLS, and you only invent falsehood. Verily, those whom you worship besides Allah have no power to give you provision, so seek provision from Allah Alone, and be grateful to Him. To Him Alone you will be brought back.

And if you deny, then nations before you have denied (their Messengers). And if the duty of the Messenger is only to convey the message plainly.”

See they not how Allah originates creation, then will repeat it. Verily, that is easy for Allah.

He punishes whom He wills, and show mercy to whom He will, and to Him you will be returned.

And you cannot escape in the earth or in the heaven. And besides Allah you have neither any Protector nor any Helper.

And those who disbelieve in the proofs, evidences, verses, lessons, signs, revelations, etc. of Allah and meeting with Him (On Judgement Day), — it is they who have no hope of My Mercy, and it is they who will have a painful Punishment (Hell).

So nothing was the answer of (Abraham’s) people except that they said: “Kill him or burn him.” Then Allah saved him from the fire. Verily, in this are indeed signs for a people who believe.

And Abraham said: “You have taken for worship idols instead of Allah, and love between you is the only in the life of this world, but on the Day of Resurrection, you shall disown each other, and your abode will be the Hell-Fire, and you shall have no helper.”

And remember LOT, when he said to his people: “Do you commit the worst sin such as none preceding you has committed in the mankind and jinns?

“Verily, you practise your lusts on men instead of women. Nay, but you are a people transgressing beyond bounds.

And the answer of his people was only that they said: “Drive them out of your town, these are indeed men who want to be pure!”

Then We saved him and his family, except his wife; she was of those who remained behind. And We rained down on them a rain of stones. Then see what was the end of the disbelievers.

And remember when MOSES said: “O Pharaoh! I am a Messenger from ALLAH, THE LORD OF WORLDS AND ALL THAT EXISTS.

“Proper it is for me that I say nothing concerning Allah but the truth. Indeed I have come to you from your Lord with a clear proof. So let the Children of Israel depart along with me.”

And remember when We rescued you from Pharaoh’s people, who were afflicting you with the worst torment, killing your sons and letting your women alive. And in that was a great trial from your Lord.

And We appointed for Moses thirty nights and added ten more, and be completed the term, appointed by his Lord, of forty nights. And Moses said to his brother Aaron: “Replace me among my people, act in the Right Way and follow not the way of the mischief-makers.

And when Moses came at the time and place appointed by Us, and his Lord spoke to him, he said: “O my Lord! Show me Yourself, that I may look upon you.” Allah said: “You cannot see Me.” So when his Lord appeared to the mountain, He made it collapse to dust, and Moses fell down unconcious. Then when he recovered his senses He said: “Glory be to You, I turn to you in repentance and I am the first of the believers.

And remember when JESUS, SON OF MARY, said: “O CHILDREN OF ISRAEL! I AM THE MESSENGER OF ALLAH TO YOU confirming THE TORAH which came before me, and confirming the PROPHET whose name shall be “AHMED (MUHAMMED)”. But when he (Prophet Muhammad Peace be upon him) came to them with clear proofs, they said: “This is plain magic.”

SAY (O Muhammad Peace be upon him): O MANKIND! VERILY, I AM SENT TO YOU ALL AS THE MESSENGER OF ALLAH – TO WHOM BELONGS THE DOMINION OF THE HEAVENS AND THE EARTH. NONE HAS THE RIGHT TO BE WORSHIPPED BUT HE; IT IS HE WHO GIVES LIFE AND CAUSES TO DEATH. SO BELIEVE IN ALLAH AND HIS MESSENGER MUHAMMAD (pbuh), WHO CAN NEITHER READ NOR WRITE, WHO BELIEVES IN ALLAH AND HIS WORDS (Qur’an), AND FOLLOW HIM SO THAT YOU MAY BE GUIDED.”

And remember when Allah brought forth from the children of Adam, from their loins, their seed (or from Adam’s loin his offspring) and made them testify as to themselves saying: “AM I NOT YOUR LORD?” THEY (all mankind) SAID: YES! WE TESTIFY,” lest you should say on the Day of Resurrection: “Verily, We have been unaware of this.”

Or lest you should say: “It was only our fathers aforetime who took others as partners in worship along with Allah, and We were merely their descendants after them; will You then destroy us because of the deeds of men who practised al-Batil (worshipping others besides Allah).

Thus do We expalain the Ayat (proofs, evidences, lessons, signs, revelations, etc.) in detail, so that they may turn to the “TRUTH.”