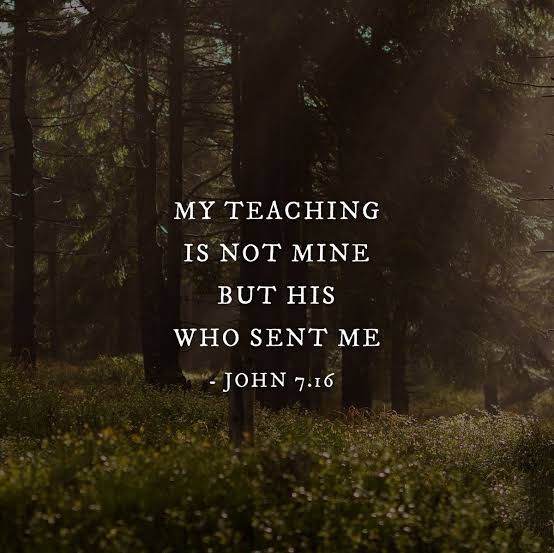 📖John 11:4
Then they took away the stone [from the place] where the dead was laid. And Jesus lifted up [his] eyes, and said, “God, I thank You that You have heard me. And I knew that You hear me always, but because of the people who stand by, I said [it], so that they may believe that You have sent me.

📖Matthew 9:8
When the crowd saw this, they were filled with awe; and they praised God, who had given such authority to man.

📖Acts 10:38
How God anointed Jesus of Nazareth with the Holy Spirit and power, and how he went around doing good and healing all who were under the power of the devil, because God was with him.

📖Quran 3:49
[That it was God who made Jesus] a messenger to the Children of Israel, who said, “Indeed I have come with a miracle to you from your Lord in that I design [something] from clay for you like the form of a bird, then I breathe into it and it becomes a bird by permission of God. And I cure the blind and the leper, and I give life to the dead – by permission of God. And I inform you of what you eat and what you store in your houses. Indeed there is a sign in that for you, if you are believers.

📖Quran 25:55
Yet they worship ( ie, Jesus & idols) besides Allah that which can neither benefit nor harm them; the disbeliever always collaborates against his Lord.

📖John 8:42
Jesus said to them, “If God were your Father, you would love me, for I have come here from God. I have not come on my own; God sent me.

📖John 13:16
Very truly I tell you, no servant is greater than his master, nor is a messenger greater than the one who sent him.

📖John 8:26
I have much to say in judgment of you. But he who sent me is trustworthy, and what I have heard from him I tell the world.

📖Quran 27:59
Say, “All praise is for Allah, and peace be upon His slaves whom He has chosen. Is Allah better, or those partners whom they associate with Him?”

📖Quran 17:43
He is exalted and high above what they say by great sublimity.

📖Quran 7:192
The false gods are unable to [give] them help, nor can they help themselves.

📖Deuteronomy 5:7
You will have no other gods before Me.

📖Deuteronomy 5:8-9
You shall not make for yourself a carved image, or any likeness of anything that is in heaven above, or that is on the earth beneath, or that is in the water under the earth. You shall not bow down to them or serve them; for I the LORD your God am a jealous God, visiting the iniquity of the fathers on the children to the third and fourth generation of those who hate me

📖Quran 2:40
O Children of Israel, remember My favor which I have bestowed upon you and fulfill My covenant [upon you] so that I will fulfill your covenant from Me, and be afraid of only Me.

📖Hosea 13:4
I am the Lord your God from the land of Egypt, and you will know no god but Me, for [there is] no savior beside Me.

📖Quran 21:92
Indeed this, your religion, is one religion, and I am your Lord, so serve Me.

📖Acts 7:4
But, they made a calf in those days, and offered sacrifice to the idol, and rejoiced in the works of their own hands.

📖Quran 20:88
For the Samiri, extracted [the statue of] a calf for them which had a lowing sound, and they said, “This is your god and the god of Moses, but he forgot.

📖Psalms 106:20-21
Thus they changed His glory into the similitude of an ox who eats grass. [And so] they forgot God their Savior, who had done great things in Egypt.

📖Romans 1:25
And thus they, changed the truth of God into a lie, and revered and served the creature more than the Creator, who is blessed forever.

📖Mark 12:32
And the scribe said to him, “Well, teacher, you have said the truth, for there is one God; and there is no other except Him.”

📖Mark 10:17
And when he had gone forth into the way, one came running, and knelt to him, and asked him, “Good teacher, what will I do so that I may inherit eternal life?”

📖Luke 10:28
You have answered correctly,” Jesus replied. “Do this and you will live.

📖Quran 2:163
Thus, your God is one God. There is no god except Him, the Gracious, the Merciful.

📖Quran 6:19
So, say, “What thing is greatest in testimony?” Say, “God is witness between me and you. And this Qur’an was revealed to me so that I may warn you thereby and whomever it reaches. Do you [truly] testify that there are other gods with God?” Say, “I will not testify [with you].” Say, “Indeed, He is only one God, and indeed, I am innocent of what you associate with Him.

📖Quran 2:132-133
And Abraham instructed his sons and Jacob, [saying], “O my sons, indeed God has chosen for you this religion, so do not die except while you are in submission [to God].” Or were you witnesses when death approached Jacob, when he said to his sons, “What will you serve after me?” They said, “We will serve your God and the God of your fathers, Abraham and Ishmael and Isaac – one God. And we are in submission to Him.

📖Quran 39:14-16
Say [O Muhammad], “I serve God [alone], sincere to Him in my religion; so serve what you will besides Him.” Say, “Indeed, the losers are the ones who will lose their souls and their families on the Day of Resurrection. Unquestionably, that is the clear loss.” They will have canopies of fire above them and canopies below them. By that, God threatens His servants. O My servants, then fear Me.

📖Quran46:6
When the people are gathered [on the Day of Judgement], those [who were worshiped other than God] will be enemies to them, and they will be deniers of their worship.

📖Quran 4:159
And there is none from the People of the Scripture but that he will surely believe in Jesus before his death. And on the Day of Resurrection he will be against them a witness.

📖Quran 35:14
[Thus] if you invoke them, they do not hear your supplication; and if they heard, they would not respond to you. And on the Day of Resurrection, they will deny your association. And none can inform you like [One] Aware [of all matters].

📖Luke 13:26 – 27
[But] then you will begin to say, “We have eaten and drunk in your presence, and you have taught in our streets.” But [Jesus] will say, “I tell you, I do not know from where you are, depart from me, workers of iniquity.”

📖Psalms 53:4
[So] do the workers of iniquity have no knowledge? Who eats up my people [as] they eat bread, they have not called upon God.

📖Quran18:100-102
And [so] We will present Hell that Day to the disbelievers, its width – those whose eyes had been within a cover [removed] from My remembrance, and they were not able to hear. Then do those who disbelieve think that they can take My servants [such as Jesus] instead of Me as protectors? Indeed, We have prepared Hell for the disbelievers as a lodging.

📖Deuteronomy 32:37-38
And He will say, “Where are their gods, their rock in whom they trusted, which ate the fat of their sacrifices, and drank the wine of their drink offerings? Let them rise up and help you, and be your protection.”

📖Book of Enoch 62:9 -10
And [so] all the mighty kings, and the exalted, and those who rule the dry ground, will fall down before [the Son of man] on their faces and prostrate; and they will set their hopes on that Son of man, and will entreat him, and will petition for mercy from him. But the Lord of spirits will then so press them that they will hasten to go out from before Him, and their faces will be filled with shame, and the darkness will grow deeper on their faces –

📖Quran 16:27
For, on the Day of Resurrection He will disgrace them and say, “Where are My ‘partners’ [such as my servant Jesus & Idols] whom you used to oppose [the believers] with?” Those who were given knowledge will say, “Indeed disgrace and evil are upon the disbelievers this Day.

📖Wisdom of Solomon 12:27
[So] look, for what things they grudged, when they were punished, that is, for those whom they thought to be gods; now being punished in them, when they saw it, they acknowledged Him to be the true God, whom they denied to know before; and therefore extreme damnation came upon them.