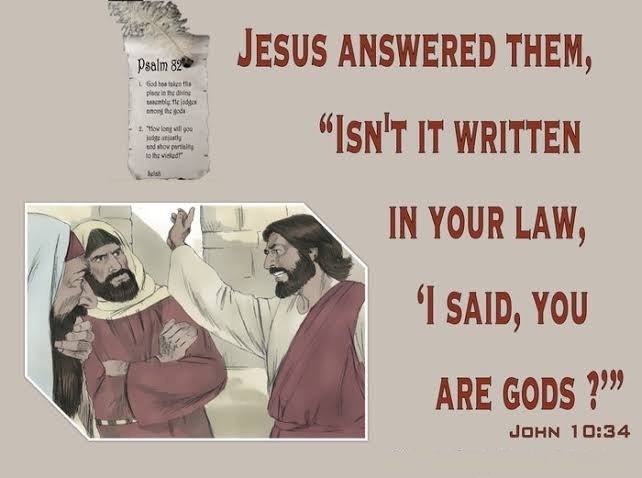 📖John 10:30-38
30 I and the Father are one.
31 Again his Jewish opponents picked up stones to stone him,
32 but Jesus said to them, “I have shown you many good works from the Father. For which of these do you stone me?”
33 “We are not stoning you for any good work,” they replied, “but for blasphemy, because you, a mere man, claim to be God.
34 Jesus answered them, “Is it not written in your Law, ‘I have said you are “gods.
35 If he called them ‘gods,’ to whom the word of Godcame—and Scripture cannot be set aside.
36 what about the one whom the Father set apart as his very own and sent into the world?Why then do you accuse me of blasphemy because I said, ‘I am God’s Son’?
37 Do not believe me unless I do the works of my Father.
38 But if I do them, even though you do not believe me, believe the works, that you may know and understand that the Father is in me, and I in the Father.

📖John 17:21
that all of them may be one, Father, just as you are in me and I am in you. May they also be in us so that the world may believe that you have sent me.

📖John 17:23
I in them and you in me—so that they may be brought to complete unity. Then the world will know that you sent me and have loved them even as you have loved me.

📖John 17:11
I will no longer be in the world, but they are in the world, and I am coming to You. Holy Father, protect them by Your name, the name You gave Me, so that they may be one as We are one.

📖John 6:38
For I came down from heaven, not to do mine own will, but the will of Him that sent me.

📖John 20:17
Jesus said, “Do not hold on to me, for I have not yet ascended to the Father. Go instead to my brothers and tell them, ‘I am ascending to my Father and your Father, to my God and your God.

Christians!  Why do you twist verses to mislead humans ?

📖John 6:38
For I came down from heaven, not to do mine own will, but the will of Him that sent me.

I and the father are one ?

The Jews in Solomon’s porch misunderstood Jesus’ (PBUH) words, exactly, like the Christian’s, therefore, ‘the Jews took up stones again to stone him…For a good work we stone thee not; but for blasphemy; and because that thou, being a man, makest, thyself God. Jesus (PBUH) realized their misunderstanding, and was surprised, how they could misunderstand his words since they are well acquainted with the Bible’s metaphoric language. Quoting what comes in 👇

📖John 10:35-37
If he called them gods, unto whom the word of God came. Say ye of him, whom the Father hath sanctified, and sent into the world, Thou blasphemest; because I said, I am the Son of God? If I do not the works of my Father, believe me not.

Blasphemy, while all those who received God’s words are considered in the Torah as gods. Therefore, with this verse from Psalms, Jesus (PBUH) corrected the Jews’ and the Christians’ misunderstanding about his unity with Allah. This way of expression about the similarity of will and objective, is common in the Christians’ sacred writings, especially in the Gospel according to John. Quoting Jesus, about the disciples, John said. 👇

📖John 17:11
Holy Father, keep through your own name those whom thou hast given me, that they may be one, as we are.

That means as our unity is an objective unity; therefore, their unity should be like ours as well. Similarly, a verse comes in another chapter. 👇

📖2 Corinthians 6:16
For ye are the temple of the living God; as God hath said, I will dwell in them, and walk in them; and I will be their God, and they shall be my people.

📖1 Corinthians 3:8
The one who plants and the one who waters have one purpose, and they will each be rewarded according to their own labor.

Paul’s unity with Apollo, is alsothe shared objective unity. The Gospel according to John, Priest Matta Almeskeen, Vol. 1, pp 643-644 Describing the relationship between husband and wife, the Torah says.👇

📖Genesis 2:24
Therefore, shall a man leave his father and his mother, and shall cleave unto his wife: and they shall be one flesh.

Means they are the same, not because their two bodies became one body. Therefore, we should not understand these verses shallowly and literally, as Matthew said, ‘And said.👇

📖Matthew 19:5
For this cause shall a man
leave father and mother, and shall cleave to his wife: and they twain shall be one flesh?

📖Quran 48:10
Indeed, those who pledge allegiance to you, [O Muhammad] – they are actually pledging allegiance to Allah . The hand of Allah is over their hands. So he who breaks his word only breaks it to the detriment of himself. And he who fulfills that which he has promised Allah – He will give him a great reward.

As for son of God, Does God have a son?

Concerning son of God, father and daughters of God..etc these are all mytaphorical in the Bible For example jesus said in Matthew 15:24 I sent only to lost sheep of israel”

Were israelists sheep? No but language is metapore means : misguided servants of God

All prophets called sons of God in bible

WHO IS THE FIRST SON OF GOD?

📖1 John 5:1
Whosoever believeth that Jesus is the Christ is born of God: and every one that loveth him that begat loveth him also that is begotten of him.

📖Deuteronomy 32:19
And when the LORD saw it, he abhorred them, because of the provoking of his sons, and of his daughters. 20And he said, I will hide my face from them, I will see what their end shall be: for they are a very froward generation, children in whom is no faith.

📖Metthew 15:24
I sent only to the lost sheep of israel.
Were israelists animals?

No more debate after these infos on son of god, Jesus says the voice of God you have never heard and says he is a messenger, Jesus is a messenger.

📖John 5:30
I can of mine own self do nothing: as I hear, I judge: and my judgment is just; because I seek not mine own will, but the will of the Father which hath SENT me.

and is not a God at all

📖1 John 4:12
No one has ever seen God; but if we love one another, God lives in us and his love is made complete in us.

📖John 5:24
Very truly I tell you, whoever hears my word and believes him who sent me has eternal life and will not be judged but has crossed over from death to life.

Yet in the Bible

4 different Sons of God in Bible, Christians claim that Jesus was the Only Son of God. According to Bible they mostly refer to Gospel of John (Paul’s Doctrine). Such as:

📖John 3:16
For God so loved the world that he gave his one and only Son, that whoever believes in him shall not perish but have eternal life.

📖John 5:22
“Moreover, the Father judges no one, but has entrusted all judgment to the Son,

📖In Exodus 4:22 Jacob was god’s first born
“Then you will tell him, ‘this is what the LORD says: Israel (Jacob) is my firstborn son.

David was also the son of God in Psalms

📖Psalm 2:7
“I will surely tell of the decree of the LORD: He said to me, ‘You are My Son, Today I have begotten you.

There is No one specific God stated in Bible for example in Islam Muslims kids even know God’s is only one with one unique name “Allah” who does have different attributes. But Different Bible gives different names for Christian god. So who is the real god of Christians? The names of god in bible are Jehovah, Yahweh, Adonai, and Lord. While some are drop but other are still in use: King James Version and American Standard Version use Jehovah for God World English Bible and New Jerusalem Bible (Hebrew text) uses Yahweh, While other use Lord for God, For Example:

📖Exodus 6:3
Jehovah is god in Bible
And I appeared unto Abraham, unto Isaac, and unto Jacob, by the name of God Almighty, but by my name JEHOVAH was I not known to them.

📖Exodus 8:1
Yahweh is also god in Bible “Yahweh spoke to Moses, Go in to Pharaoh, and tell him, “This is what Yahweh says, ‘Let my people go, that they may serve me.

📖Matthew 27:46
Eloi is also god in Bible “About the ninth hour Jesus cried out in a loud voice, “Eloi, Eloi, lama sabachthani?”–which means, “My God, my God, why have you forsaken me?

Let us Look how to write names in Hebrew