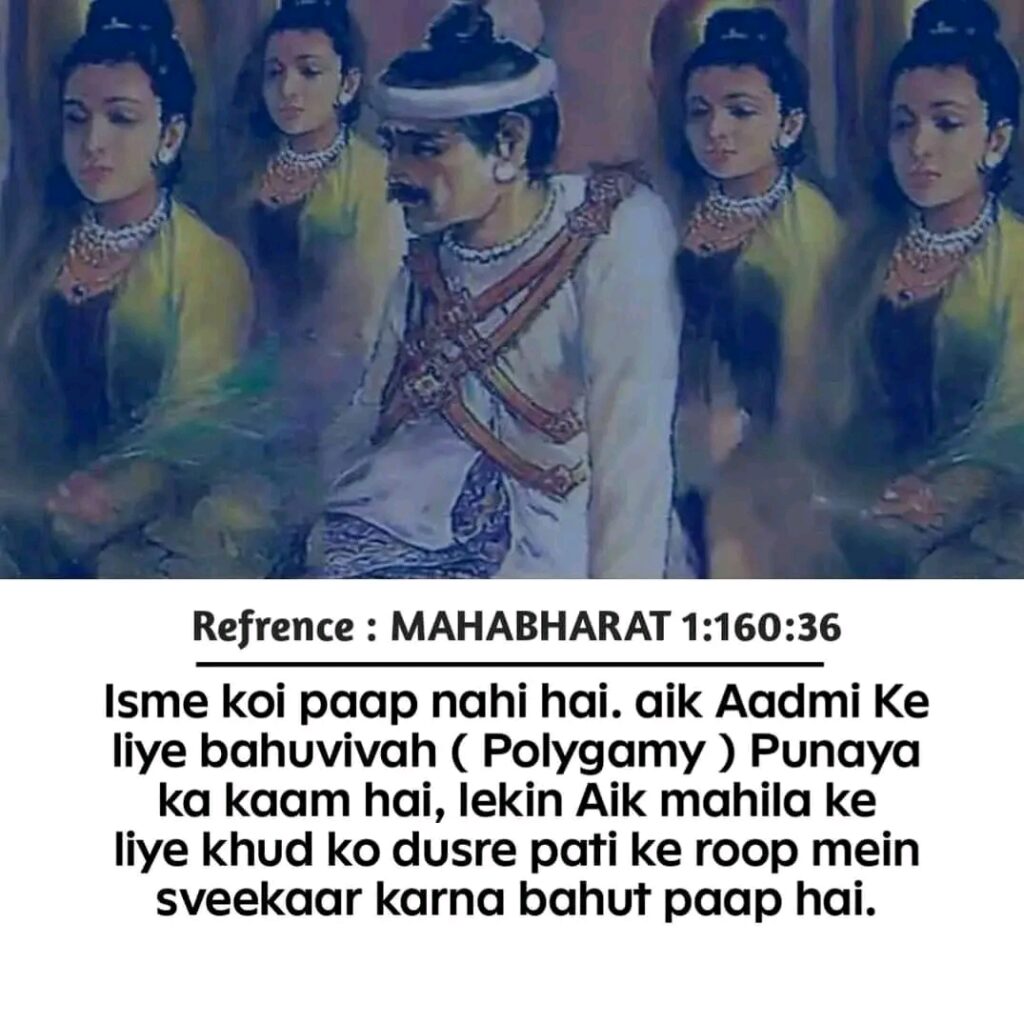 The Concept of Polygamy in Hinduism

Polygamy, the practice of having more than one spouse at the same time, is a central tenet of Hinduism and has not been traditionally condoned by Hindu scriptures. However, polygamy has been practiced by some Hindus in certain regions and historical periods. It is important to note that the Hindu scriptures, namely the Vedas and the Dharmashastras, do not explicitly prohibit polygamy. In fact, the hindu scriptures even mention the possibility of a man taking multiple wives in certain circumstances.

📖Mahabharat Anusasanika Parva Chapter 44 Verse 14 A Brahmana can take three wives. A Kshatriya can take two wives. As regards the Vaisya, he should take a wife from only his own order.

📖Manusmriti Verse 9.149
If to a Brāhmaṇa there be four wives in due order,—for partition among the sons born of these, the rule has been declared to be as follows.

According to Manusmriti It is permissible for a Brahmin to have 4 Wives This has been said in Manusmriti because there is another verse in Mahabharata which also allows 4 Wives.

📖Mahabharat Book 1 Chapter 160 Verse 36
There is no sin in this. For a man polygamy is an act of merit, but for a woman it is very sinful to betake herself to a second husband after the first.

📖Valmiki Ramayana Ayodhya Kanda Chapter 34: Verses 10-14 Oh, Sumantra! being all my wives, who are here. Surrounded by all of them, I want to see the virtuous Rama, Sumantra, after entering the gynaecium, spoke these words to those women as follows: “Oh, the venerable ladies! The king is calling you. Go there without delay, All those women, asked thus by Sumantra as per the king’s orders, went to his palace, after knowing the instructions of their husband, Encircling Kausalya, three hundred fifty women, steadfast in their vow(of devotion to their husband), with their eyes reddened, went there slowly. After arrival of his wives, king Dasaratha spoke to that charioteer as follows, “Oh, Sumantra! Bring my son here.

📖Srimad Bhagavatam 10.69.1-6
Śukadeva Gosvāmī said: Hearing that Lord Kṛṣṇa had killed Narakāsura and had alone married many brides, Nārada Muni desired to see the Lord in this situation. He thought, “It is quite amazing that in a single body Lord Kṛṣṇa simultaneously married sixteen thousand women, each in a separate palace.” Thus the sage of the demigods eagerly went to Dvārakā.

Now if you include the other eight queens of Krishna that He had married earlier the number becomes 16,008. So as per puranas Krishna indeed has 16,108 wives.

📖Brahma Puran 1:175
Brilliant children of unmeasured splendour were born of those ladies of holy rites who had been mentioned as the twenty-seven wives of Soma.

Soma the moon god of hindu had 27 wives

📖Srimad Bhagavatam 9.6.52
In the beginning I was alone and engaged in performing the austerities of mystic yoga, but later, because of the association of fish engaged in sex, I desired to marry. Then I became the husband of fifty wives, and in each of them I begot one hundred sons, and thus my family increased to five thousand members. By the influence of the modes of material nature, I became fallen and thought that I would be happy in material life. Thus there is no end to my material desires for enjoyment, in this life and the next.

📖Shiv Puran Book 3 – Brahma Khanda Chapter 42 Verses 99-103. I bow down to the two wives of the Four-faced Lord, the mothers of the universe. Both these goddesses are splendid and auspicious. Gāyatrī and Sarasvatī are of the form of learning. You are the causes of the creation and annihilation of the universe. You are the mothers of the Vedas. You are of the form of Havya and Kavya with the Moon and the Sun for your eyes.