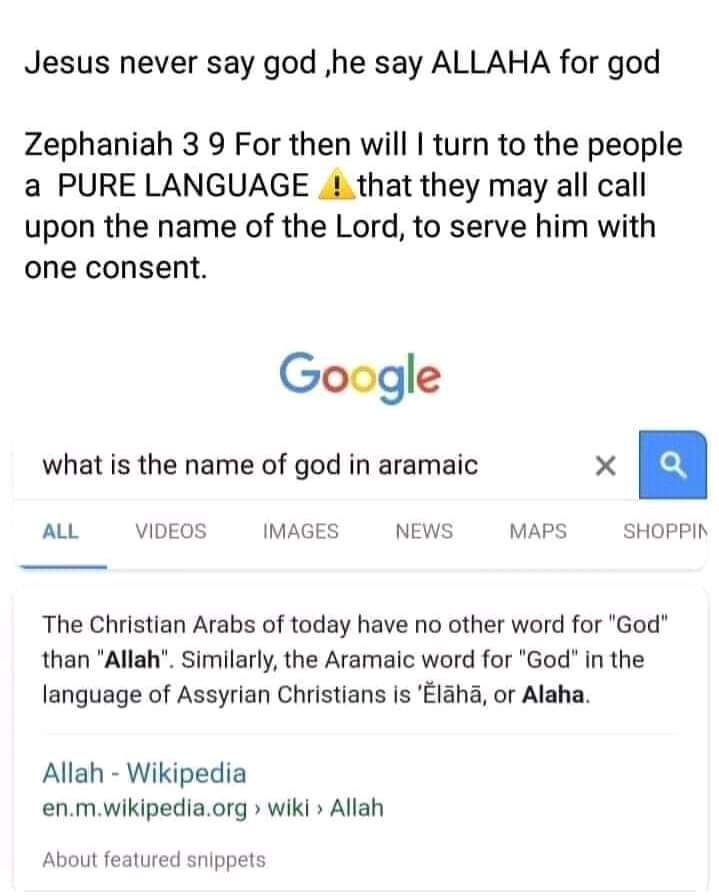 Allah in Jesus Aramaic language is Alaha. In Arabic Bible and Torah God is Allah الله!!! In Hebrew they add em for respect so Allah الله is Allahem اللهم or Elohem إلوهيم!!! We even call him Allahem اللهم specially in supplication.

When we call someone we use Ya يا. Some Muslim think the Greatest Name of God is Hoo or Hewh هو as in Quran هو الله الذي لا إله إلا هو . If we want to call him we say ياهو Yahoo or Yahweh!!! Jesus was talking Aramaic so he will say (There is no god except Allaha) Mark 10:18 &. Which is half the Shahada. The second half depend on the time of Prophet Abraham will say Abraham is His Messenger. Mosses will say Mosses is His Messenger in time of Jesus he will say Jesus is His Messenger. After Seal of Prophets Mohamed we say Mohamed is His Messenger as engraved on the Throne and all leaves of Paradise are decorated with Shahada. The 8 doors of Paradise Written on them (There is One God) لا إله إلا الله. Hence, it is one religion from Adam to Mohamed PBUTHEM.

The word “Allah” is the perfect description of the “One God” of monotheism for Jews, Christians and Muslims!

Is “Allah” only for Islam and Muslims?
[No! It is for All Three Abrahamic Faiths.]

“Allah” is the same word used by Christian Arabs and Jewish Arabs in their Bible, centuries before Islam came.

On page one [1] of Genesis in the Old Testament, we find the word “Allah” seventeen [17] times.

“For God so loved the world…”
– and the word the translators used in Arabic for “God” is the very same word used by Muslims around the planet, “Allah.”
Where Does the word “Allah” Come From?

“Allah” comes from the Arabic word “elah”a god’ or something worshiped. – (Arabic) means ‘

This word (elah) can be made plural (gods), as in “aleha” and it can be male or female just as the word in English can be “goddess.”

“Allah” comes from “elaha” but it brings more clarification and understanding.

Allah = Has no gender (not male and not female)