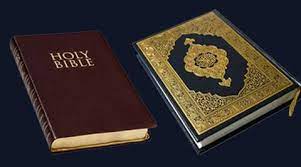 Going a little farther, he fell with his face to the ground and prayed, “My Father, if it is possible, may this cup be taken from me. Yet not as I will, but as you will.” ( Matthew 26:39)

The Jews say, “Ezra is the son of Allah,” while the Christians say, “The Messiah is the son of Allah.” Such are their baseless assertions, only parroting the words of earlier disbelievers. May Allah condemn them! How can they be deluded ˹from the truth˺? (Quran 9:30)
“O you who believe, indeed many religious scholars and monks eat away people’s wealth unjustly, and turn (others) away from the way to God.  And those who treasure gold and silver, and do not spend it in the Way of God, then give them the news of a painful punishment.” (Quran 9:34)

23:91, Qur’an
[And thus,] God has not taken any son, nor has there ever been any god with Him. [If there had been], then each god would have gone with what it created, and some of them would have [sought to] be high above others.  God is glorified above what they describe [concerning Him].