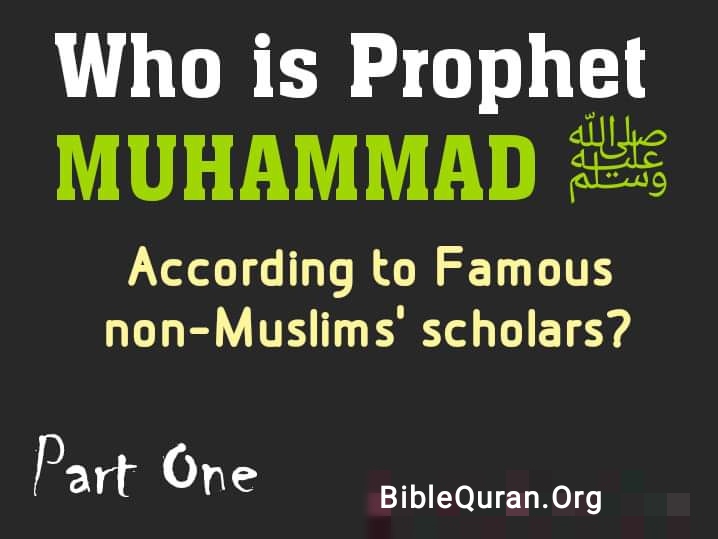 WHO IS PROPHET MUHAMMAD ﷺ ACCORDING TO FAMOUS NON MUSLIMS’ SCHOLARS?

It should be noted that, BibleQuran is only concerned about great famous personalities who have contributed lots to the building of nations. They are the foundational researchers that have greatly made discoveries of many theories and laws for a better today and we happen to be using mainly their knowledge for a stand point and so, you non Muslim reading this without your name mentioned entails that your words against Muhammad do not count because even history has not recorded you as a contributor to life.

‘I looked into history for a human paradigm and found it to be in Muhammad.’

⏺️2. Professor Keith Moore, a professor in the division of anatomy, faculty of surgery at the university of Toronto said in his book “The Developing Human”:

It is clear to me that these statements must have come to Muhammad from God, or Allah, because most of this knowledge was not discovered until many centuries later. This proves to me that Muhammad must have been a messenger of God, or Allah.’ He further said: ‘I have no difficulty in my mind reconciling that this is a divine inspiration or revelation, which lead him to these statements.’

‘A totally objective examination of it [the Qur’an] in the light of modern knowledge, leads us to rccognize the agreement between the two as has been already noted on repeated occasions. It makes us deem it quite unthinkable for a man of Muhammad’s time to have been the author of such statements, on account of the state of knowledge in his day. Such considerations are part of what gives the Qur’anic Revelation its unique place, and forces the impartial scientist to admit his inability to provide an explanation which calls solely upon materialistic reasoning.’

‘It is impossible for anyone who studies the life and character of the great Prophet of Arabia, who knew how he taught and how he lived, to feel anything but reverence for the mighty Prophet, one of the great messengers of the Supreme. And although in what I put to you I shall say many things which may be familiar to many, yet I myself feel, whenever I reread them, a new way of admiration, a new sense of reverence for that mighty Arabian teacher” Learn Part 2 ( WHO IS MUHAMMAD ﷺ ACCORDING TO FAMOUS NON MUSLIMS’ SCHOLARS?

To be continued Insha Allah.