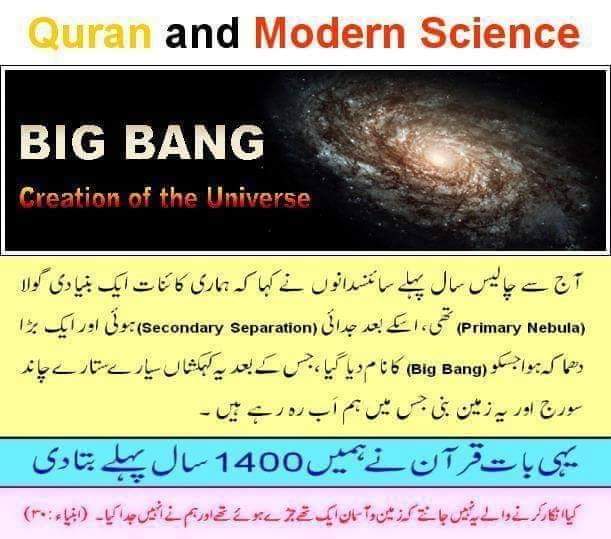 BIRTH OF THE UNIVERSE (BIG BANG):

The night sky presents the viewer with a picture of a calm and unchanging Universe. So the 1929 discovery by Edwin Hubble that the Universe is in fact expanding at enormous speed was revolutionary. Hubble noted that galaxies outside our own Milky Way were all moving away from us, each at a speed proportional to its distance from us.

“He quickly realized what this meant that there must have been an instant in time (now known to be about 14 billion years ago) when the ENTIRE UNIVERSE (earth, planets, galaxies all together) was contained in a SINGLE POINT in space. The UNIVERSE must have been BORN in this SINGLE VIOLENT EVENT which came to be known as the “BIG BANG.”
——–

HOLY QUR’AN ABOUT “BIRTH OF THE UNIVERSE (BIG BANG)”

“Have not those who disbelieve known that the HEAVENS AND THE EARTH WERE JOINED TOGETHER AS ONE UNITED PIECE, THEN WE PARTED THEM?” And We have made from water every living thing. WILL THEY NOT THEN BELIEVE?

[The meaning of the verse is that the heavens along with what it contains of galaxies, planets and stars altogether making up the universe in which we live were originally equivalent to a single contagious mass. And His saying: Ratqun’ (joined together) since Ar-Ratq means together and thereafter a “parting” and “explosion” occured to this mass. Then galaxies, planets and stars formed. This is what astronomers have discovered only at the end of the twentieth century.]
———–

EXPANDING UNIVERSE : There had been a very short period immediately after the Big Bang where the Universe experienced an incredible burst of expansion called “inflation”.

It had always been assumed that the matter of the Universe would slow its rate of expansion. Mass creates gravity, gravity creates pull, the pulling must slow the expansion. But supernovae observations showed that the EXPANSION OF THE UNIVERSE , RATHER THAN SLOWING, IS ACCELERATING. Something, not like matter and not like ordinary energy, is pushing the galaxies apart.
———-

THE LORD SAYS: “WITH POWER DID WE CONSTRUCT THE HEAVEN. VERILY, WE ARE ABLE TO EXTEND THE VASTNESS OF SPACE THEREOF.

[The miraculous point of the Verse of the Qur’an is the syntax of “verily We are able to extend the vastness of space thereof” which implies the past, present and the future indicating that the universe is in a state of continuous expansion. This is what astronomical observations have revealed only in 1929.]

Say (O Muhammad to the mankind): ” Do you verily disbelieve in Him Who created the earth in two Days and you set up rivals in worship with Him? That is the Lord of the worlds and all that exists.

Then He rose towards the heaven when it was SMOKE, and said to the earth: Come both of you willingly or unwillingly.” They both said: “We come, willingly.”

Then He completed and finished from their creation as seven heavens in two Days and He made in each heaven its affair. And We adorned the lowest heaven with stars…

VERILY, YOUR GOD IS INDEED ONE; LORD OF THE HEAVENS AND OF THE EARTH AND ALL THAT IS BETWEEN THEM, AND THE LORD OF THE EVERY POINT OF THE SUN’S RISINGS.

Do they not see that Allah, Who created the heavens and the earth, and was not wearied by their creation, is Able to give life to the dead? Yes, He surely is Able to do all things.

Are you more difficult to create, or is the heaven that He constructed?

He raised its height, and He has equally ordered it.

And they (Jews, Christians) say: Allah has begotten a son. Glory be to Him. Exalted He above all that they associate with Him. Nay, to Him belongs all that is in the heavens and on earth, and all surrender with obedience in worship to Him.

The Originator of the heavens and the earth. When He decrees a matter, He only says to it : “Be!” – and it is.

“THIS IS THE TRUTH FROM YOUR LORD, SO BE NOT OF THOSE WHO DOUBT.”

“WE WILL SHOW THEM OUR SIGNS IN THE UNIVERSE, AND IN THEIR OWN SELVES until it becomes manifest to them that this QUR’AN IS THE TRUTH. Is it not sufficient in regard to your Lord that He is a Witness over all things.”