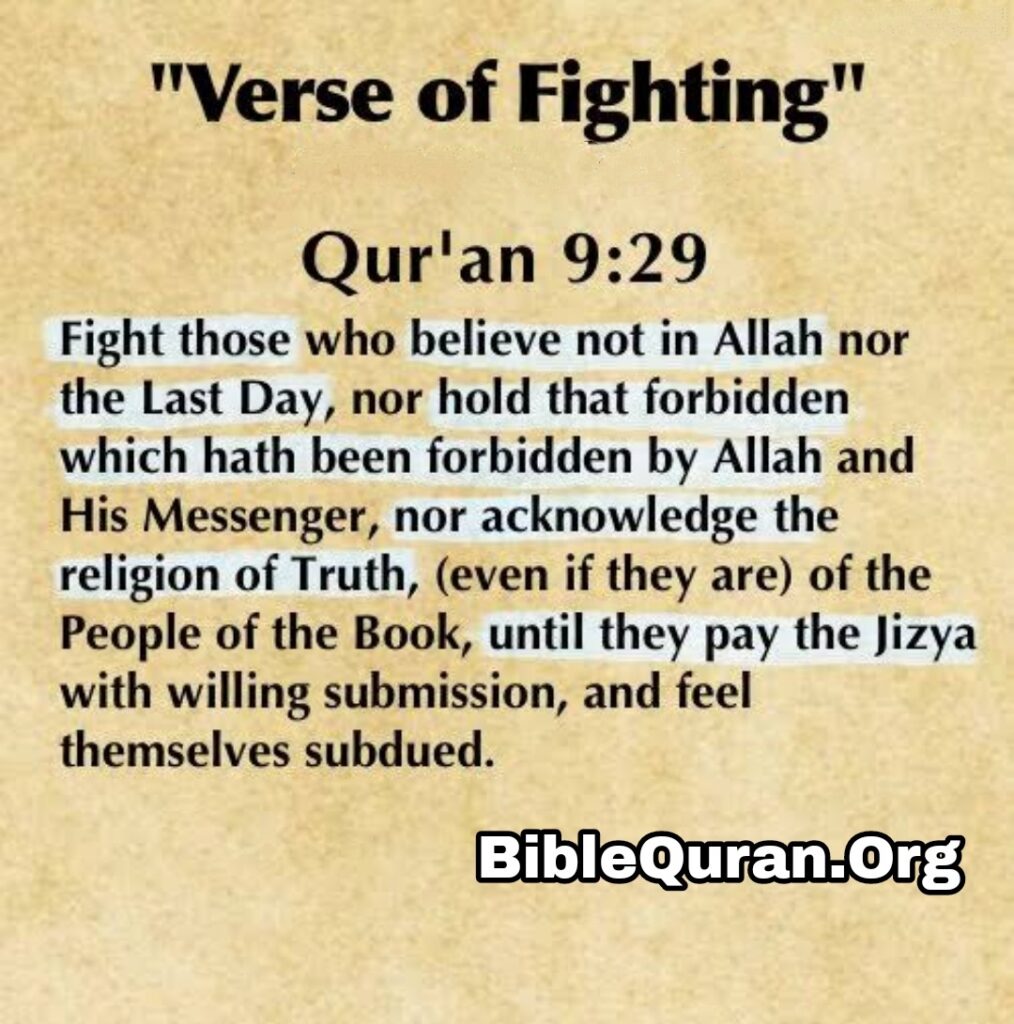 Discussing this verses out of context is like saying that the Bible calls for genocide.

✝️1 Samuel 15:2-3
This is what the LORD Almighty says: ‘I will punish the Amalekites for what they did to Israel when they waylaid them as they came up from Egypt. Now go, attack the Amalekites and totally destroy all that belongs to them. Do not spare them; put to death men and women, children and infants, cattle and sheep, camels and donkeys.

📔Quran 4:58
Indeed, Allah commands you to render trusts to whom they are due and when you judge between people to judge with justice. Excellent is that which Allah instructs you. Indeed, Allah is ever Hearing and Seeing.

📔Quran 2:190
Fight in the way of Allah those who fight you but do not transgress. Indeed. Allah does not like transgressors.

📔Quran 9:10-13
They do not observe toward a believer any pact of kinship or covenant of protection. And it is they who are the transgressors. But if they repent, establish prayer, and give zakah, then they are your brothers in religion; and We detail the verses for a people who know. And if they break their oaths after their treaty and defame your religion, then fight the leaders of disbelief, for indeed, there are no oaths [sacred] to them; [fight them that] they might cease.

📔Quran 9:13
Would you not fight a people who broke their oaths and determined to expel the Messenger, and they had begun [the attack upon] you the first time? Do you fear them? But Allah has more right that you should fear Him, if you are [truly] believers.

📔Quran 47:4
That is because those who disbelieve follow falsehood, and those who believe follow the truth from their Lord. Thus does Allah present to the people their comparisons.

📔Quran 8:61
And if they incline to peace, then incline to it [also] and rely upon Allah . Indeed, it is He who is the Hearing, the Knowing.

📔Quran 22:27
Permission [to fight] has been given to those who are being fought, because they were wronged. And indeed, Allah is competent to give them victory.

📔Quran 47:5-7
So when you meet those who disbelieve [in battle], strike [their] necks until, when you have inflicted slaughter upon them, then secure their bonds, and either [confer] favor afterwards or ransom [them] until the war lays down its burdens. That [is the command]. And if Allah had willed, He could have taken vengeance upon them [Himself], but [He ordered armed struggle] to test some of you by means of others. And those who are killed in the cause of Allah – never will He waste their deeds. He will guide them and amend their condition, And admit them to Paradise, which He has made known to them.

📔Quran 4:46
Indeed, those who disbelieve in Our verses – We will drive them into a Fire. Every time their skins are roasted through We will replace them with other skins so they may taste the punishment. Indeed, Allah is ever Exalted in Might and Wise.

📔Quran 4:89
They wish you would disbelieve as they disbelieved so you would be alike. So do not take from among them allies until they emigrate for the cause of Allah . But if they turn away, then seize them and kill them wherever you find them and take not from among them any ally or helper.

📔Quran 4:101
And when you travel throughout the land, there is no blame upon you for shortening the prayer, [especially] if you fear that those who disbelieve may disrupt [or attack] you. Indeed, the disbelievers are ever to you a clear enemy.

📔Quran 8:69
So consume what you have taken of war booty [as being] lawful and good, and fear Allah . Indeed, Allah is Forgiving and Merciful.

📔Quran 9:14
Sahih International
Fight them; Allah will punish them by your hands and will disgrace them and give you victory over them and satisfy the breasts of a believing people.

📔Quran 9:5
So, when the sacred months expire, kill the Mushriks wherever you find them, and catch them and besiege them and sit in ambush for them everywhere. Then, if they repent and establish Salāh and pay Zakāh, leave their way. Surely, Allah is most Forgiving, Very-Merciful.

📔Quran 9:123
O you who have believed, fight those adjacent to you of the disbelievers and let them find in you harshness. And know that Allah is with the righteous.

📔Quran 66:9
O Prophet, strive against the disbelievers and the hypocrites and be harsh upon them. And their refuge is Hell, and wretched is the destination.

📔Quran 2:190-194
Fight in the way of Allah against those who fight you, and do not transgress. Verily, Allah does not like the transgressors, Kill them wherever you find them, and drive them out from where they drove you out, as Fitnah (to create disorder) is more severe than killing. However, do not fight them near Al-Masjid-ul-Harām (the Sacred Mosque in Makkah) unless they fight you there. However, if they fight you (there) you may kill them. Such is the reward of the disbelievers. But if they desist, then indeed, Allah is Most-Forgiving, Very- Merciful, Fight them until there is no Fitnah any more, and obedience remains for Allah. But, if they desist, then aggression is not allowed except against the transgressors, The holy month for the holy month, and the sanctities are subject to retribution. So when anyone commits aggression against you, be aggressive against him in the like manner as he did against you, and fear Allah, and be sure that Allah is with the God-fearing, Quran 2:195 And Spend in the way of Allah and do not put yourselves into destruction, and do good. Of course, Allah loves those who do good.

📔Quran 4:90
Except for those who take refuge with a people between yourselves and whom is a treaty or those who come to you, their hearts strained at [the prospect of] fighting you or fighting their own people. And if Allah had willed, He could have given them power over you, and they would have fought you. So if they remove themselves from you and do not fight you and offer you peace, then Allah has not made for you a cause [for fighting] against them.

📔Quran 9:6
And if any one of the Mushriks seeks your protection, give him protection until he listens to the Word of Allah, then let him reach his place of safety. That is because they are a people who do not know.

📔Quran 60:8
Sahih International
Allah does not forbid you from those who do not fight you because of religion and do not expel you from your homes – from being righteous toward them and acting justly toward them. Indeed, Allah loves those who act justly.

➡️It’s important whenever one reads a Quranic verse, to read it in its context. As you have read, critics only quote the part which suites them, they isolate previous verses and the ones after. When the passage is examined in context, it is clear that nowhere does it sanction the killing of innocent people. From verse 2:190 to 2:195, when read, Allah makes it evident to fight those only who fight them, fighting in self-defence. Another thing some love to do with the verse is, change the Arabic word’s meaning. Example, the Arabic word ‘Fitna’ used in 2:191 and 2:193, they deceptively have translated the word as ‘disbelief’. So, when it’s read in that perspective, the passage is implying to fight to those who are disbelievers, just because of their religion. This again when we examine it, it will turn out to be a lie. The Arabic word ‘Fitnah’ means ‘persecution’, ‘corruption’, ‘sedition’. But when the word ‘Fitnah’ is used in verse 2:191 and 2:193 it means ‘persecution’.

This all verses belong to the time of Prophet Muhammad in macca & Medina, we can clearly read this passage ALLAH said fight this who fight with you, ALLAH clearly said in Quran 9:6 if any of the Polytheist seeks your protection, give them protection.

📔Quran 9:29
Fight those who do not believe in Allah and the Last Day, nor comply with what Allah and His Messenger have forbidden, nor embrace the religion of truth from among those who were given the Scripture,1 until they pay the tax,2 willingly submitting, fully humbled.

Footnote 1 : among those who were given the Scripture 👇

To fully understand this verse we need to bear in mind that Quranic verses are of two types. General verses talk about belief in Allah, good manners, and acts of worship. Specific verses, such as this verse, were revealed in regards to particular situations. This sûrah came at a time when the pagans of Arabia (and their allies) repeatedly violated treaties they had signed with the Prophet (ﷺ). Muslims had to fight for the survival of their newly established state in Medina. So this verse discusses dealing with those who violated their agreements and attacked the Muslims. Offenders were fought, unless they stopped their aggression. If they chose not to accept Islam, they were obligated to pay Jizya-tax.

Taxation systems have existed since ancient times. There are several references in the Old Testament (e.g., Ezra 4:20). In the New Testament, Jesus allows paying taxes to Caesar (Luke 20:25,  Matthew 17:24–27, Matthew 22:21). Under Islamic rule, all individuals had financial obligations—Muslims paid zakâh (2.5% of their savings) and non-Muslims (ⱬimmîs) were required to pay jizyah (tax for protection from foreign enemies). The jizyah was an average of one dinar (4.25 g of gold) annually. Women, children, the elderly, the clergy, the poor, and those who were unable to work were exempt. Those who opted to join the army were also exempt. Poor ⱬimmîs were supported financially by the state. Muslim rulers refunded the jizyah if they failed to protect their non-Muslim subjects.

📔Quran 5:32 whoever kills a soul unless for a soul or for corruption [done] in the land – it is as if he had slain mankind entirely. And whoever saves one – it is as if he had saved mankind entirely. And our messengers had certainly come to them with clear proofs. Then indeed many of them, [even] after that, throughout the land, were transgressors.

📔Quran 6:151
Say, ˹O Prophet,˺ “Come! Let me recite to you what your Lord has forbidden to you: do not associate others with Him ˹in worship˺. ˹Do not fail to˺ honour your parents. Do not kill your children for fear of poverty. We provide for you and for them. Do not come near indecencies, openly or secretly. Do not take a ˹human˺ life—made sacred by Allah—except with ˹legal˺ right. (For example, in retaliation for intentional killing through legal channels.) This is what He has commanded you, so perhaps you will understand.

📔Quran 4:93
Sahih International
But whoever kills a believer intentionally – his recompense is Hell, wherein he will abide eternally, and Allah has become angry with him and has cursed him and has prepared for him a great punishment.

📔Quran 25:68-69
Sahih International
And those who do not invoke with Allah another deity or kill the soul which Allah has forbidden [to be killed], except by right, and do not commit unlawful sexual intercourse. And whoever should do that will meet a penalty, Multiplied for him is the punishment on the Day of Resurrection, and he will abide therein humiliated.