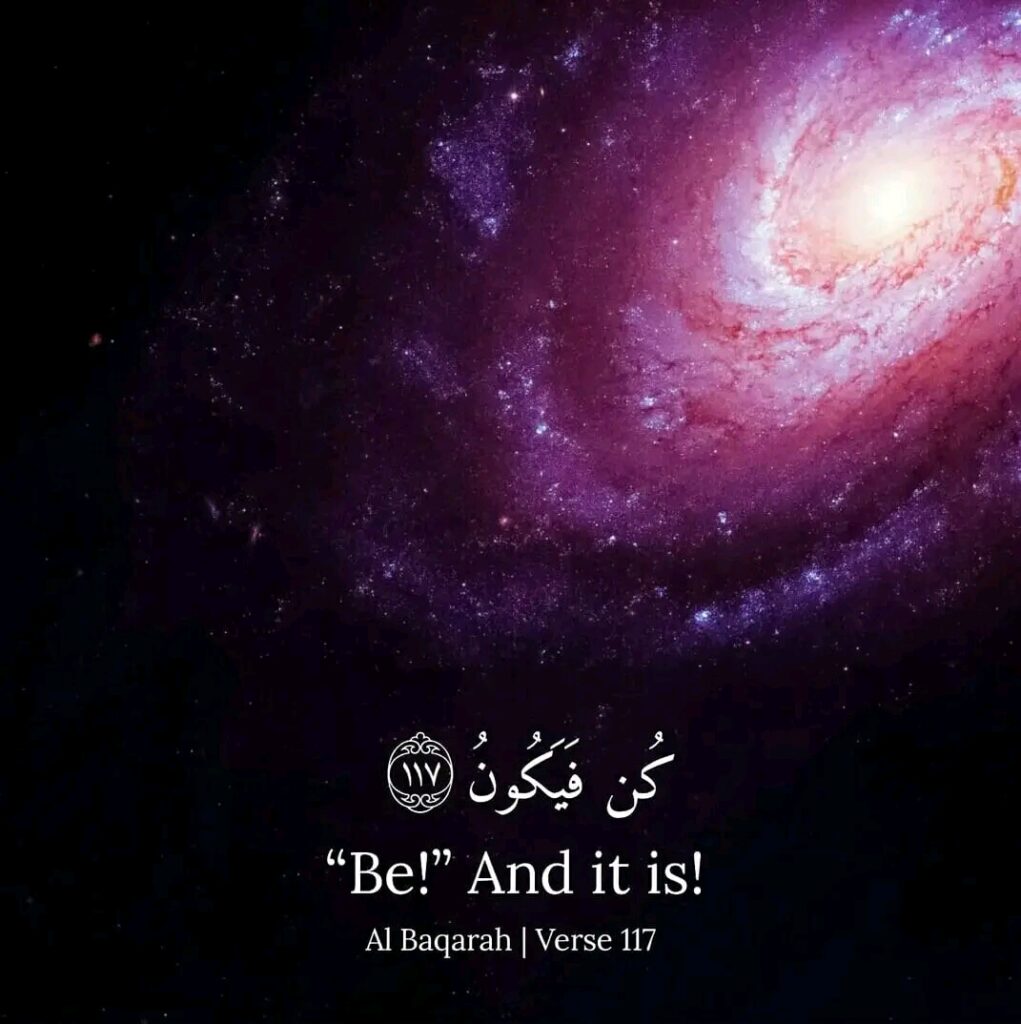 📖Psalms 33:4
For the word of the LORD is upright, and all His work is trustworthy

📖Quran 4:171
O people of the Book, be not excessive in your Faith, and do not say about Allah anything but the truth. The Messiah ‘Jesus, the son of Mary, is only a Messenger of God, and His Word that He had delivered to Mary, and a spirit from Him [created at a command Quran 36:82, Sahih al-Bukhari 7510, Sahih al-Bukhari 3435, Psalm 104:30] So, believe in God and His Messenger. Do not say “Three”. Stop it. That is good for you. Allah is the only One God. He is far too pure to have a son. To Him belongs what is in the heavens and what is in the earth. And Allah is enough to trust in.

📖Quran 3:39
So the angels called out to him while he stood praying in the sanctuary, “Allah gives you good news of ˹the birth of˺ John who will confirm the Word of Allah and will be a great leader, chaste, and a prophet among the righteous.

📖Psalm 33:6
By the word of the LORD the heavens were made, their starry host by the breath of his mouth.

📖Hebrews 11:3
Through faith we understand that the worlds were framed by the word of God, so that things which are seen were not made of things which do appear.

📖Psalm 148:5
New International Version
Let them praise the name of the LORD, for at his command they were created,

📖Psalms 105:3
He spoke, and various sorts of flies came, and lice in all their coasts.

📖Psalms 105:34
He spoke, and the locusts came, and caterpillars, and that without number.

📖Proverbs 16:4
The LORD has made everything for His purpose—even the wicked for the day of disaster.

📖Quran 3:59-60
Indeed, the example of Jesus to God is like that of Adam. He created him from dust; then He said to him, “Be,” and he was. The truth is from your Lord, so do not be among the doubters.

📖James 1:18
For of His own will, He produced us with the word of truth, so that we should be a kind of firstfruits of His creatures.

📖Quran 19:16-18
And mention, [O Muhammad], in the Book [the story of] Mary, when she withdrew from her family to a place toward the east. And she took, in seclusion from them, a screen. Then We sent to her Our Angel [i.e., Gabriel], and he represented himself to her as a well-proportioned man. She said, “Indeed, I seek refuge in the Most Merciful from you, [so leave me], if you should be fearing of Allah.

📖Psalm 104:30 When you send your Spirit, they are created, and you renew the face of the ground.

📖Quran 38:71-72
Mention, when your Lord said to the angels,`Indeed I am about to create a human being out of clay, and this was Adam, So when I have proportioned him and breathed into him of My [created Psalm 104:30 ] Spirit, then fall down to him in prostration.

📖Quran 3:59
Indeed, the likeness of Jesus to Allah is like that of Adam. He created him from dust; then He said to him, “Be,” and he was.

Truly, the likeness of Jesus, his remarkable case, in God’s sight, is as Adam’s likeness, as the case of Adam, whom God created without father or mother: this is a comparison of one remarkable thing with another more remarkable, so that it convinces the disputer and establishes itself in one’s mind more effectively. He created him, Adam, that is, his form, of dust, then said He to him, `Be,’, a human being, and he was; similarly, He said to Jesus, `Be’ — without a father — and he was.

📖Job 33:4
The Spirit of God has made me; the breath of the Almighty gives me life.

📖Quran 3:54 – 56
And [the disbelievers] planned, but God planned. And God is the best of planners. When God said, “O Jesus, indeed I will take [your soul] and raise you to Myself and purify you from those who disbelieve and make those who follow you superior to those who disbelieve until the Day of Resurrection. Then your return is to Me, and I will judge between you concerning those [matters] in which you used to differ. And as for those who disbelieved, I will punish them with a severe punishment in this world and the Hereafter, and they will have no helpers.

📖John 7:33
So Jesus said, “I am with you only a little while longer, and then I am going to the One who sent Me.

📖Quran 4:157-4:158
And for their saying, “We have killed the Messiah, Jesus, the son of Mary, the Messenger of God.” In fact, they did not kill him, nor did they crucify him, but it appeared to them as if they did. Indeed, those who differ about him are in doubt about it. They have no knowledge of it, except the following of assumptions. Certainly, they did not kill him. Rather, God raised him up to Himself. God is Mighty and Wise.

📖Quran 19:34
That is ‘Jesus, the son of Mary, to say the truth in which they (Christians) are disputing.

📖Quran 19:36 ˹Jesus also declared,˺ “Surely Allah is my Lord and your Lord, so worship Him ˹alone˺. This is the Straight Path.

📖Luke 24:38-40
Why are you troubled,” Jesus asked, “and why do doubts arise in your hearts? Look at My hands and My feet. It is I Myself. Touch Me and see— for a spirit does not have flesh and bones, as you see I have. And when He had said this, He showed them His hands and feet.

📖John 20:17
Jesus said, “Do not hold on to me, for I have not yet ascended to the Father. Go instead to my brothers and tell them, ‘I am ascending to my Father and your Father, to my God and your God.

The word Father is being used by pious persons in Bible for God, but people have misused this word, because of this reason we do not use this word father in Islam.

📖Exodus 22:20
“Whoever sacrifices to any god other than the LORD must be destroyed.

📖Quran 9:29
Fight those who do not believe in Allah and the Last Day, nor comply with what Allah and His Messenger have forbidden, nor embrace the religion of truth from among those who were given the Scripture, until they pay the tax, willingly submitting, fully humbled.

📖Quran 9:30
The Jews say, “Ezra is the son of Allah,” while the Christians say, “The Messiah is the son of Allah. Such are their baseless assertions, only parroting the words of earlier disbelievers. May Allah condemn them! How can they be deluded ˹from the truth˺?

📖Quran 9:31
They have taken their rabbis and monks as well as the Messiah, son of Mary, as lords besides Allah, even though they were commanded to worship none but One God. There is no god ˹worthy of worship˺ except Him. Glorified is He above what they associate ˹with Him˺!

📖Quran:19:37-38
Yet their ˹various˺ groups have differed among themselves ˹about him˺, so woe to the disbelievers when they face a tremendous Day!How clearly will they hear and see on the Day they will come to Us! But today the wrongdoers are clearly astray.

📖Quran 5:116-120
And God will say (on the Day of Resurrection), ‘O Jesus, son of Mary, did you say to people, ‘Worship me and my mother instead of God?’’ He will say, ‘Glory be to You! It is not for me to say what I have no right (to say). If I had said it, You would have known it. You know what is (hidden) in myself and I do not know what is in Yours. Indeed, You are the Knower of the unseen.’ I did not tell them except what You commanded me, ‘Worship God, my Lord and your Lord.’ And I was a witness over them while I was among them, but when You took me up, You were the Watcher over them, and You are a Witness to all things. If You punish them, they are Your servants, and if You forgive them, indeed You are the All-Mighty, the All-­ Wise.” God will say, ‘This is the Day when the truth will benefit those who were truthful. To them belong gardens with rivers running through it (in Paradise), where they will stay forever. God is pleased with them and they are pleased with Him. That is the great success.’ To God belongs the heavens and the earth and whatever is within them, and He is Able to do all.”

📖Matthew 7:21-23
“Not everyone who says to me, ‘Lord, Lord,’ will enter the kingdom of heaven, but only the one who does the will of my God who is in heaven,Many will say to me on that day, ‘Lord, Lord, did we not prophesy in your name and in your name drive out demons and in your name perform many miracles?’Then I ( Jesus ) will tell them plainly, ‘I never knew you. Away from me, you evildoers!’

📖Luke 13:26-27 & luke 13:28
Then you will say, ‘We ate and drank with you, and you taught in our streets.’ And he will answer, ‘I tell you, I do not know where you are from. Depart from me, all you evildoers. There will be weeping there, and gnashing of teeth, when you see Abraham, Isaac and Jacob and all the prophets in the kingdom of God, but you yourselves thrown out.

📖Hebrews 11:5
By faith Enoch was taken from this life, so that he did not experience death: “He could not be found, because God had taken him away. For before he was taken, he was commended as one who pleased God.

📔Quran 19:56-57
And mention in the Book, Idrees. Indeed, he was a man of truth and a prophet, And We raised him to a high station.

📖2 Kings 2:11
As they were walking along and talking together, suddenly a chariot of fire and horses of fire appeared and separated the two of them, and Elijah went up to heaven in a whirlwind.