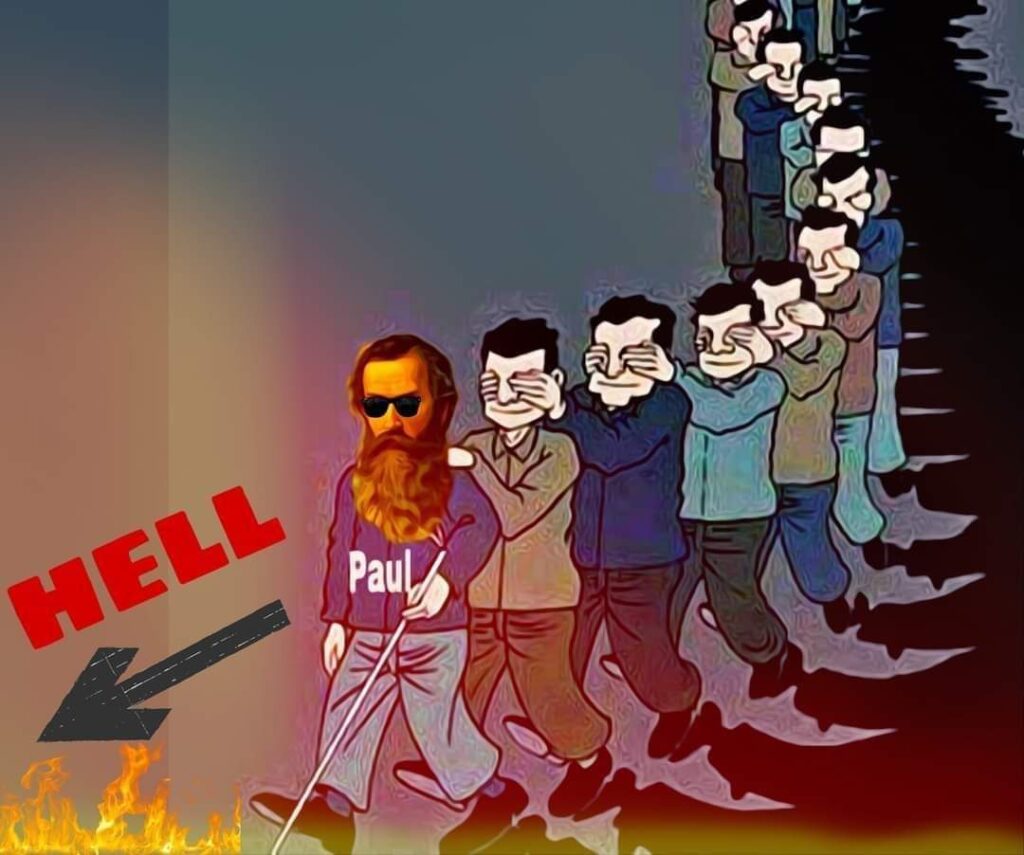 ➡️John 1:17
For the law was given by Moses, but grace and truth came by Jesus Christ.

➡️Matthew 5:17-19
“Do not think that I have come to abolish the Law or the Prophets; I have not come to abolish them but to fulfill them.For truly I tell you, until heaven and earth disappear, not the smallest letter, not the least stroke of a pen, will by any means disappear from the Law until everything is accomplished.Therefore anyone who sets aside one of the least of these commands and teaches others accordingly will be called least in the kingdom of heaven, but whoever practices and teaches these commands will be called great in the kingdom of heaven.

➡️Matthew 24:14 ► ( Orginal Gospel fulfilled at the time of Jesus Christ) 👉 And this gospel of the kingdom will be preached in the whole world as a testimony to all nations, and then the end will come.

🐍1 Corinthians 15:13-19 ( Antichrist came with new Gospel & Satanic pen changed all orginal message)👇
If there is no resurrection of the dead, then not even Christ has been raised.And if Christ has not been raised, our preaching is useless and so is your faith. Yea, and we are found false witnesses of God; because we have testified of God that he raised up Christ: whom he raised not up, if so be that the dead rise not.For if the dead rise not, then is not Christ raised:And if Christ has not been raised, your faith is futile; you are still in your sins.Then those also who have fallen asleep in Christ are lost.If only for this life we have hope in Christ, we are of all people most to be pitied.

👇Contradiction made by Devil Paul 🐲

🐍2 Timothy 2:8 👉 Remember Jesus Christ, raised from the dead, descended from David. This is my gospel ( my new Gospel 🐍)

➡️Matthew 24:5 ►
For many will come in my name, claiming, ‘I am the Messiah,’ and will deceive many.

🐍Galatians 2:20 ►
I have been crucified with Christ and I no longer live, but Christ lives in me. The life I now live in the body, I live by faith in the Son of God, who loved me and gave himself for me. (👉 Paul claimed he is a Messiah because Christ lives in him).

➡️Matthew 24:24
For false Christs and false prophets will appear and perform great signs and wonders that would deceive even the elect, if that were possible.

🐍Corinthians 12:28
And God has placed in the church first of all apostles, second
prophets third teachers, then miracles, then gifts of healing, of helping, of guidance, and of different kinds of tongues.

➡️Jesus – At that time if anyone says to you, ‘Look, here is the Christ!’ or ‘There He is!’ do not believe it. 22For false Christs and false prophets will appear and perform signs and wonders that would deceive even the elect, if that were possible. 23So be on your guard; I have told you everything in advance.… ( mark 13:22) Three years after Jesus’ Ascension, Christians were waiting for Jesus’s return on clouds of glory which Jesus promised every eye would see from “eastern to western sky.” (Matthew 24:26-29.) Only the day or hour was unknown.

🐍At that point, Paul was breathing “murderous threats” on Christians. He was clearly a lost man. Paul then had a wilderness encounter outside Damascus with someone saying “I am Jesus whom you persecute” — the voice implying he was the Christ. (Acts 9:1-11) However, those with Paul “saw no one.” (Acts 9:7.)

🐍As SAUL journeyed he came near Damascus and suddenly A LIGHT FROM HEAVEN (LIGHTNING) shone around him and he fell to the ground”
(Acts 9:3,4)

➡️“So the great DRAGON was cast out FROM HEAVEN, that SERPENT of old called the Devil and Satan, who deceives the whole world; HE WAS CAST TO THE EARTH AND HIS ANGELS WERE CAST OUT WITH HIM ”
(Revelation 12:9. Matthew 13:39)

👉SCALES OF THE SERPENT

🐲there fell from SAUL’S eyes something like SCALES (of the SERPENT)”
(Acts 9:18)

➡️Matthew 23:9 ►
And do not call anyone on earth ‘father,’ for you have one Father, and he is in heaven.

🐍1 Corinthians 4:15 ►
Even if you had ten thousand guardians in Christ, you do not have many fathers, for in Christ Jesus I became your father through the gospel.

🐲1 Corinthians 9:24
Do you not know that in a race all the runners run, but only one receives the prize? Run in such a way as to take the prize.

🐲Galatians 2:19 ►
New Living Translation
For when I tried to keep the law, it condemned me. So I died to the law—I stopped trying to meet all its requirements—so that I might live for God.

☑️Jeremiah 11:3 ►
Tell them that this is what the LORD, the God of Israel, says: ‘Cursed is the one who does not obey the terms of this covenant—

☑️Deuteronomy 27:26
Cursed be he that confirmeth not all the words of this law to do them. And all the people shall say, Amen.

🐲Galatians 3:10 ►
For all who rely on the works of the law are under a curse, as it is written: “Cursed is everyone who does not continue to do everything written in the Book of the Law.”

🐲Romans 3:28
Therefore we conclude that a man is justified by faith without the deeds of the law.

🐲Romans 4:15 ►
New International Version
because the law brings wrath. And where there is no law there is no transgression.

🐲Romans 4:15 ►
New Living Translation
For the law always brings punishment on those who try to obey it. (The only way to avoid breaking the law is to have no law to break!)

🐲Galatians 5:4 ►
You who are trying to be justified by the law have been alienated from Christ; you have fallen away from grace.

➡️Jeremiah 4:4
Circumcise yourselves to the LORD, and remove the foreskins of your hearts, O men of Judah and people of Jerusalem. Otherwise, My wrath will break out like fire and burn with no one to extinguish it, because of your evil deeds.

➡️CIRCUMCISSIOM – “THE SIGN OF THE COVENANT”
God said to Abraham, “You also must agree to keep the covenant with me, both you and your descendants in “future generations.” You and your descendents must all agree to circumcise every male among you.
From now on you must circumcise every baby boy when he is eight days old, including slaves born in your homes and slaves bought from foreigners. “This will show that there is a covenant between you and me.” Each one must be circumcised, and “this will be a physical sign to show that my covenant with you is everlasting.” Any male who has not been circumcised will no longer be considered one of my people, because he has not kept the covenant with me.” [Genesis 17 : 9]☑️
On that same day Abraham obeyed God and circumcised his son Ishmael and all the other males in his household, including the slaves born in his home and those he had bought. Abraham was ninety- nine years old when he was circumcised, and his son Ishmael was thirteen. They were both circumcised on the same day, together with all Abraham’s slave. (Genesis 17 : 26)☑️

Paul son of basterd 👇
😈Galatians 5:2 ►
Mark my words! I, Paul, tell you that if you let yourselves be circumcised, Christ will be of no value to you at all.

😈Romans 4:15 ►
New Living Translation
For the law always brings punishment on those who try to obey it. (The only way to avoid breaking the law is to have no law to break!)

👺1 Corinthians 4:15 Even if you had ten thousand guardians in Christ, you do not have many fathers, for in Christ Jesus I became your father through the gospel.