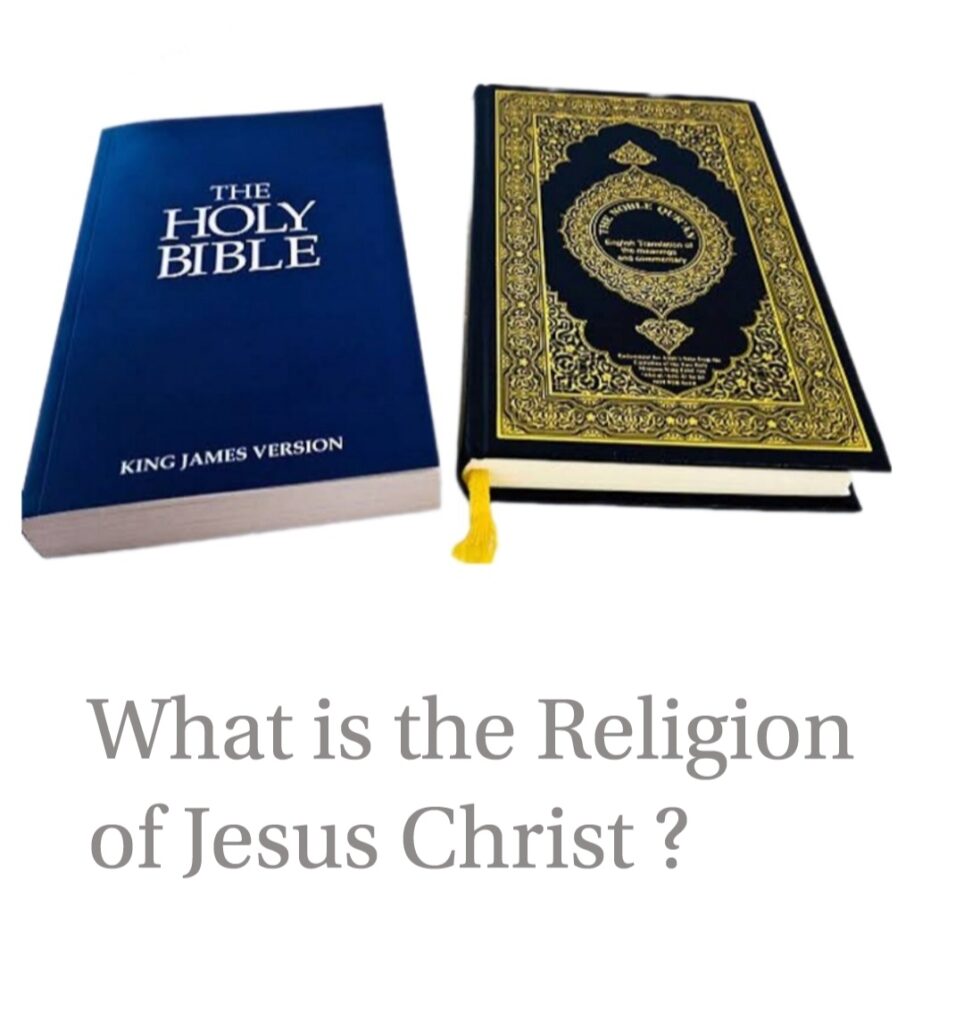 What is the meaning of Islam

The word “Islam” means submission or surrender in Arabic. It is derived from the root word “salam,” which means peace. Thus, the religion of Islam teaches that by submitting to the will of God and living according to his guidance, a person can attain inner peace and harmony. The word “Muslim” means one who has submitted to the will of God, and a person who follows the religion of Islam is called a Muslim.

What is the Religion of Jesus

JESUS CHRIST (pbuh) Was Muslim even According to Bible, We already know that Islam’* means *”the complete submission to God”*. Jesus (pbuh) submitted himself to God’s will. In the Gospels, Jesus is described as saying that he came to earth to do the will of his God “Matthew 26:39, John 4:34, John 5:30”. He is also said to have prayed to God, asking for the cup of suffering to be taken from him, but ultimately submitting to God’s will and accepting his fate Matthew 26:39, Luke 22:42.

The term “Christian” was first used to refer to Jesus’ followers in the city of Antioch, according to the New Testament. It is not clear who specifically came up with the term or how it came into use, but it is believed to have been coined by non-Christians as a way to describe the followers of Jesus. The term “Christian” is derived from the Greek word “christianos,” which means “follower of Christ.” The first recorded use of the term “Christian” can be found in the New Testament book of Acts, which describes the spread of the early Christian movement, The Quran addresses them by calling the word Christian because they call themselve Christian, but God never said this is the name of your religion and I have approved it, neither in Bible nor in Quran, the Quran also addresses certain beliefs or practices that it considers to be misguided or incorrect, and it calls on Muslims to strive for unity and cooperation with people of all faiths.

Releted: The Story of Jesus in the Holy Quran

John 14:28
You have heard Me say to you, ‘I am going away and coming back to you.’ If you loved Me, you would rejoice because I said, ‘I am going to the Father,’ for My Father is greater than I.

John 5:37
And the Father ( God ) who sent me has himself testified concerning me. You have never heard his voice nor seen his form.

Mark 14:36
And He was saying, “Abba! Father! All things are possible for Thee; remove this cup from Me; yet not what I will, but what Thou wilt.

John 5:19
Jesus therefore answered and was saying to them, “Truly, truly, I say to you, the Son can do nothing of Himself, unless it is something He sees the Father doing; for whatever the Father does, these things the Son also does in like manner.

John 6:38
For I have come down from heaven, not to do My own will, but the will of Him who sent Me.

John 7:16
Jesus therefore answered them, and said, “My teaching is not Mine, but His who sent Me.

Jesus was a messenger of God. Jesus is no exception to this, he himself was also sent by God just like every other prophet was.

Mat 15:24
But he answered and said, I am not sent but unto the lost sheep of the house of Israel.

John 5:24
Verily, verily, I say unto you, He that heareth my word, and believeth on him that sent me, hath everlasting life, and shall not come into condemnation; but is passed from death unto life.

John 5:30
I can of mine own self do nothing: as I hear, I judge: and my judgment is just; because I seek not mine own will, but the will of the Father which hath sent me.

John 4:34
Jesus saith unto them, My meat is to do the will of him that sent me, and to finish his work.

John 7:28
Then Jesus, still teaching in the temple courts, cried out, “Yes, you know me, and you know where I am from. I am not here on my own authority, but he who sent me is true. You do not know him.

So it is crystal clear that Jesus was sent, he did not send himself. So just like all other prophets Jesus is sent, and he is sent to a specific group of people. Ironic Knight – Jesus (pbuh) prayed like a Muslim.

Matthew 26:39
Going a little farther, he fell with his face to the ground and prayed,
My Father, if it is possible, may this cup be taken from me. Yet not as I will, but as you will.

Mark 1:35
Very early in the morning, *”while it was still dark, Jesus got up, left the house and went off to a solitary place, where he prayed.

Matthew 14:23
After he had dismissed them, he went up on a mountainside by himself to pray. Later that night, he was there alone.

Luke 6:12
One of those days Jesus went out to a mountainside to pray, and spent the night praying to God.

Psalm 55:17
Evening, morning and noon I cry out in distress, and he hears my voice.

Muslims pray “Maghrib”  in the evening, “Fajr” in the morning and “Dhuhr” at noon.

Mark 15:34
And at ninth hour in the afternoon Jesus cried out in a loud voice, “Eloi, Eloi, lema sabachthani?” (which means “My God, my God, why have you forsaken me?”).

Muslim prays “Asr” in the afternoon.

Hebrews 5:7
During the -days- of Jesus’ life on earth, he offered up prayers and petitions with loud cries and tears to the one who could save him from death, and he was heard because of his reverent submission.

So During his lifetime, he prayed to God everyday. Muslims prayed everyday too.

THE MESSAGE OF FALSE RELIGION

There are so many sects, cults, religions, philosophies, and movements in the world, all of which claim to be the right way or the only true path of God How can one determine which one is correct or whether, in fact, all are correct? One method by which the answer can be found is to clear away the superficial differences in the teachings of the various claimants to the ultimate truth, and identifies the central object of worship upon which they call, directly or indirectly. False religions all have in common one basic concept with regard to God they either claim that all men are gods, or that specific men were God, or that nature is God, or that God is a figment of man’s imagination. Thus, it may be stated that the basic message of false religion is that God may be worshipped in the form of His creation. False religions invite man to the worship of creation by calling the creation or some aspect of it God. For example, prophet Jesus invited his followers to worship God, but those who claim to be Jesus’ followers today call people to worship Jesus, claiming that he was God. Buddha was a reformer who introduced a number of humanistic principles in the religion of India. He did not claim to be God, nor did he suggest to his followers that he be an object of worship. Yet today most Buddhists who are to be found outside of India have taken him to be God and they prostrate themselves to idols made in their perception of his likeness. By using the principle of identifying the object of worship, we can easily detect false religions and the contrived nature of their origin. As God said in the Qur’an:

Quran 12:40
That which you worship besides Him are only names and you and your forefathers have invented for which Allah has sent down no authority: the command belongs only to Allah He has command that you worship Him; that is the right religion, but most men do not understand.

It may be argued that all religions teach good things, so why should it matter which one we follow? The reply is that all false religions teach the greatest evil the worship of creation. Creation-worship is the greatest sin that man can commit because it contradicts the very purpose of his creation. Man was created to worship God alone as Allah has explicitly stated in the Qur’an:

Quran 51:56
I have only created jinns and men, that they may worship Me.

Consequently , the worship of creation, which is the essence of idolatry is the only unforgivable sin. One who dies in this state of idolatry, has sealed his fate in the next life. This is not an opinion, but a revealed fact stated by God in his final revelation to man:

Qur’an 4:48 and 116
Verily Allah will not forgive the joining of partners with Him, but He may forgive (sins) less than that for whomsoever He wishes.

Does Jesus referred to God as Father

It is not certain that Jesus used the word “father” to refer to God, as the Gospels were written in Greek, and Jesus likely spoke Aramaic. However, it is widely accepted among biblical scholars that Jesus frequently referred to God as “Father” in his teachings, based on the accounts recorded in the New Testament. However, The New Testament writings in the Bible, which were recorded in Greek several decades after Jesus’ Ascension, use the Greek word “pater” to translate “father” in reference to God.

Why is God called Father in Bible

The use of fatherly language to describe God is common in the Bible, especially in the Old Testament. One reason for this may be that in many ancient cultures, the role of the father was central to the family and to society. The father was often seen as the head of the household and the provider for his family, and was accorded a position of respect and authority. Using fatherly language to describe God may have been a way of conveying his power and authority, as well as his loving and protective nature, Additionally, the use of fatherly language may have been a way of helping people to relate to and understand God, by using terms and concepts that were familiar to them, the use of “father” as a title for God does not necessarily imply that God has a spouse or that he is male in any literal sense. The use of this language is often symbolic, and is intended to help people understand and relate to God in a personal and meaningful way.

Why Muslim do not use Father for God

Muslims do not use the term “father” to refer to God because the word father has been misused by some people, Muslims believe in one God who is the creator and sustainer of the universe. In Islam, God is referred to in many ways such as Allah, which is a name for God that is used by Muslims around the world, including as the Lord, the Maker, the Creator, and the Sustainer, we do not refer to God as “father” because we believe that God is not a human being and does not have a gender or family relationships in the same way that humans do. Instead, Muslims believe that God is the ultimate being and the source of all life and that God is beyond human comprehension.