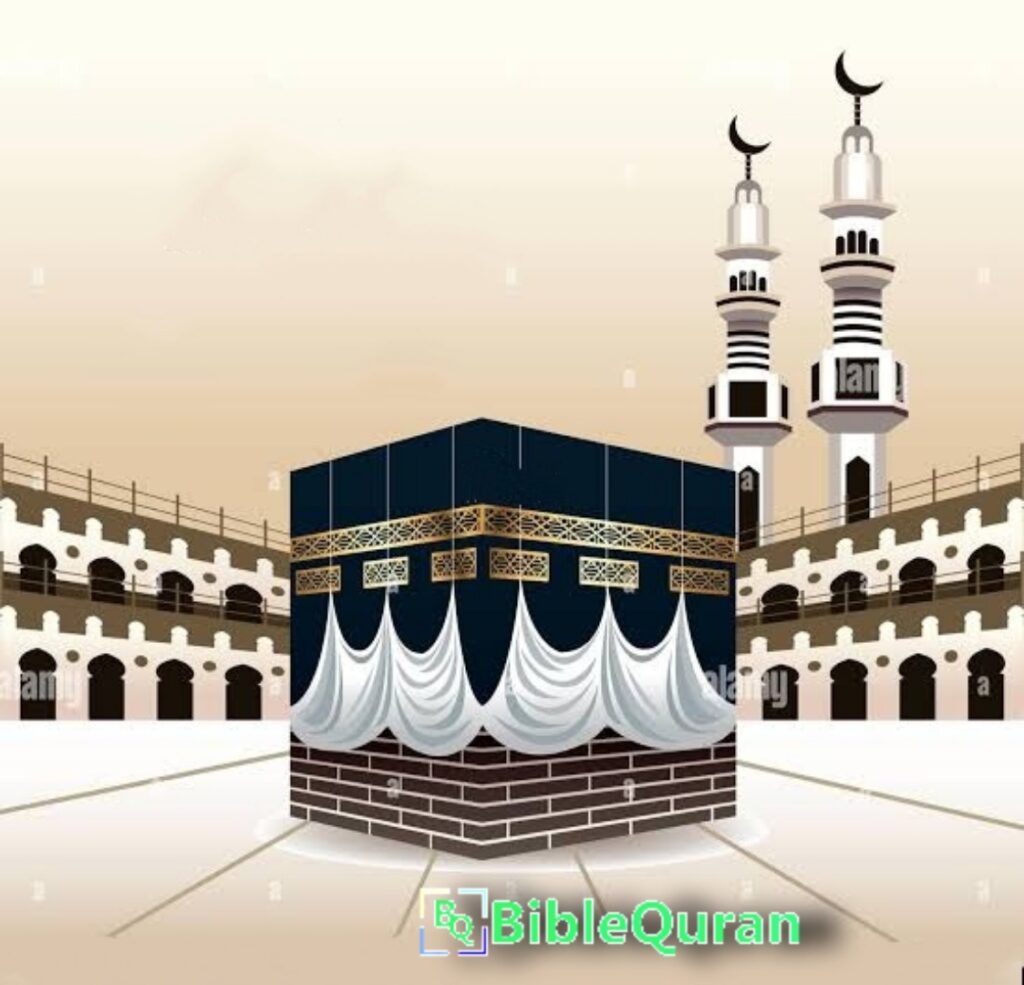 Why do Muslims pray towards the Kaaba?

Muslims do not worship the Kaaba itself. Instead, the Kaaba is a symbol of unity and a place of worship for Muslims. Muslims believe that the Kaaba was built by Abraham and his son Ishmael as a house of worship for God, and it has been a central place of pilgrimage for Muslims for over 1,400 years. Muslims do not pray to the Kaaba or any other physical object or location, but rather to God. In this way, the Kaaba serves as a physical manifestation of the unity and devotion of the global Muslim community, and it helps to focus their hearts and minds on God as they perform their prayers.

Here are a few examples:

📖Quran 2:139
Say, [O Muhammad], “Do you argue with us about Allah while He is our Lord and your Lord? For us are our deeds, and for you are your deeds. And we are sincere [in deed and intention] to Him.

📖Quran 2:140-41
Or do you say that Abraham and Ishmael and Isaac and Jacob and the Descendants were Jews or Christians? Say, “Are you more knowing or is Allah ?” And who is more unjust than one who conceals a testimony he has from Allah ? And Allah is not unaware of what you do. That is a nation which has passed on. It will have [the consequence of] what it earned, and you will have what you have earned. And you will not be asked about what they used to do.

Do we worship the black box?A BIG NO!!!

📖Quran 2:125
And [mention] when We made the House a place of return for the people and [a place of] security. And take, [O believers], from the standing place of Abraham a place of prayer. And We charged Abraham and Ishmael, [saying], “Purify My House for those who perform Tawaf and those who are staying [there] for worship and those who bow and prostrate [in prayer].

📖Quran 2:126
And [mention] when Abraham said, “My Lord, make this a secure city and provide its people with fruits – whoever of them believes in Allah and the Last Day.” [ Allah ] said. “And whoever disbelieves – I will grant him enjoyment for a little; then I will force him to the punishment of the Fire, and wretched is the destination.

📖Quran 2:127-28
And [mention] when Abraham was raising the foundations of the House and [with him] Ishmael, [saying], “Our Lord, accept [this] from us. Indeed You are the Hearing, the Knowing, Our Lord, and make us Muslims [in submission] to You and from our descendants a Muslim nation [in submission] to You. And show us our rites and accept our repentance. Indeed, You are the Accepting of repentance, the Merciful.

📖Quran 2:129
Our Lord, and send among them a messenger from themselves who will recite to them Your verses and teach them the Book and wisdom and purify them. Indeed, You are the Exalted in Might, the Wise.

📖Quran 2:130
And who would be averse to the religion of Abraham except one who makes a fool of himself. And We had chosen him in this world, and indeed he, in the Hereafter, will be among the righteous.

📖Quran 2:142
The foolish among the people will say, “What has turned them away from their qiblah, which they used to face?” Say, “To Allah belongs the east and the west. He guides whom He wills to a straight path.

📖Quran 2:143
And thus we have made you a just community that you will be witnesses over the people and the Messenger will be a witness over you. And We did not make the qiblah which you used to face except that We might make evident who would follow the Messenger from who would turn back on his heels. And indeed, it is difficult except for those whom Allah has guided. And never would Allah have caused you to lose your faith. Indeed Allah is, to the people, Kind and Merciful.

📖Quran 2:144
We have certainly seen the turning of your face, [O Muhammad], toward the heaven, and We will surely turn you to a qiblah with which you will be pleased. So turn your face toward al-Masjid al-Haram. And wherever you [believers] are, turn your faces toward it [in prayer]. Indeed, those who have been given the Scripture well know that it is the truth from their Lord. And Allah is not unaware of what they do.

The simple reason we pray facing towards Masjid al Haraam in Makkah is because it is the command of Allah, our Creator, Whom we worship. This is what Allah says in the Qur’an: Absolutely. We are not worshipping the Ka’bah, nor Masjidul Haram, nor Makkah, by facing it in prayer. We worship none but Allah. That is why, even if the Ka’bah is directly in front of us, we do not look at it, rather we look at the ground before us, as the focus of our prayer is never on any created object, but Allah alone.

📖Quran 2:148
For each [religious following] is a direction toward which it faces. So race to [all that is] good. Wherever you may be, Allah will bring you forth [for judgement] all together. Indeed, Allah is over all things competent.

📖Quran 2:149
So from wherever you go out [for prayer, O Muhammad] turn your face toward al- Masjid al-Haram, and indeed, it is the truth from your Lord. And Allah is not unaware of what you do.

📖Quran 2:150
And from wherever you go out [for prayer], turn your face toward al-Masjid al-Haram. And wherever you [believers] may be, turn your faces toward it in order that the people will not have any argument against you, except for those of them who commit wrong; so fear them not but fear Me. And [it is] so I may complete My favor upon you and that you may be guided.

📖Quran 2:158
Indeed, as-Safa and al-Marwah are among the symbols of Allah . So whoever makes Hajj to the House or performs ‘umrah – there is no blame upon him for walking between them. And whoever volunteers good – then indeed, Allah is appreciative and Knowing.

📖Quran 2:115
And to Allah belongs the east and the west. So wherever you [might] turn, there is the Face of Allah . Indeed, Allah is all-Encompassing and Knowing.

A muslim should try his best to find Qiblah direction. But if it’s impossible for him, e.g. a man lost in the sea or in the desert, traped in a prison, or even out of this planet, he can pray in any direction. Because prayer is addressed to Allah, and wherever you turn you can find Allah’s direction.

📖Quran 2:255
Allah – there is no deity except Him, the Ever-Living, the Sustainer of [all] existence. Neither drowsiness overtakes Him nor sleep. To Him belongs whatever is in the heavens and whatever is on the earth. Who is it that can intercede with Him except by His permission? He knows what is [presently] before them and what will be after them, and they encompass not a thing of His knowledge except for what He wills. His Kursi extends over the heavens and the earth, and their preservation tires Him not. And He is the Most High, the Most Great.

Related : Makkah (Mecca) in the Bible

Why Do Muslims Kiss The Black Stone in Mecca

Hajr e Aswad is a stone from Heaven gifted to Prophet Abraham (AS) by the angel Gabriel. Being true believers, Muslims must know that the act of touching or kissing the Black Stone is only done because Prophet Muhammad (PBUH) kissed and revered the sacred stone. Hajr e Aswad should be respected and honoured.

There are several hadith, or accounts of the sayings and actions of the Prophet Muhammad such as:

📖Sunan Ibn Majah 3932
It was narrated that ‘Abdullah bin ‘Amr said: “I saw the Messenger of Allah (ﷺ) circumambulating the Ka’bah and saying: ‘How good you are and how good your fragrance; how great you are and how great your sanctity. By the One in Whose Hand is the soul of Muhammad, the sanctity of the believer is greater before Allah than your sanctity, his blood and his wealth, and to think anything but good of him.

📖Tirmidhi 862
“When the Prophet arrived in Makkah, he performed seven (circuits) of Tawaf around the House. Then he came to the Maqam and said: And take you (people) the Maqam (place) of Ibrahim as a place of prayer. Then he prayed behind the Maqam. Then he came to the (Black) Stone to touch it. Then he said: ‘We begin with what Allah began with.’ So he began at As-Safa and recited: Indeed As-Safa and Al-Marwah are among the Symbols of Allah.

📖Sunan Ibn Majah 2960
“When Allah’s Messenger (ﷺ) finished circumambulating the House, he came to Maqam Ibrahim. ‘Umar said: ‘O Messenger of Allah, this is the Maqam of our father Ibrahim, about which Allah says, “And take you (people) the Maqam (place) of Ibrahim as a place of prayer. [2:125]

📖Tirmidhi 877
The Messenger of Allah said: “The Black Stone descended from the Paradise, and it was more white than milk, then it was blackened by the sins of the children of Adam.

📖Tirmidhi 860
“I saw Umar bin Al-Khattab kissing the (Black) Stone and saying: ‘I am kissing you while I know that you are just a stone, and if I had not seen the Messenger of Allah kissing you, I would not kiss you.

📖Musnad Ahmad 381
It was narrated from Hisham, from his father, that `Umar (رضي الله عنه) came to the [Black] Stone and said: I know that you are only a stone and you cannot cause harm or bring benefit. Were it not that I saw the Messenger of Allah(ﷺ )kiss you, I would not have kissed you. Then he kissed it.

📖Sahih Muslim 1268 b
I saw’lbn ‘Umar (Allah be pleased with them) touching the Stone with his hand and then kissing his hand. and he said: I have never abandoned it since I saw Allah’s Messenger (way peace be upon him) doing It.