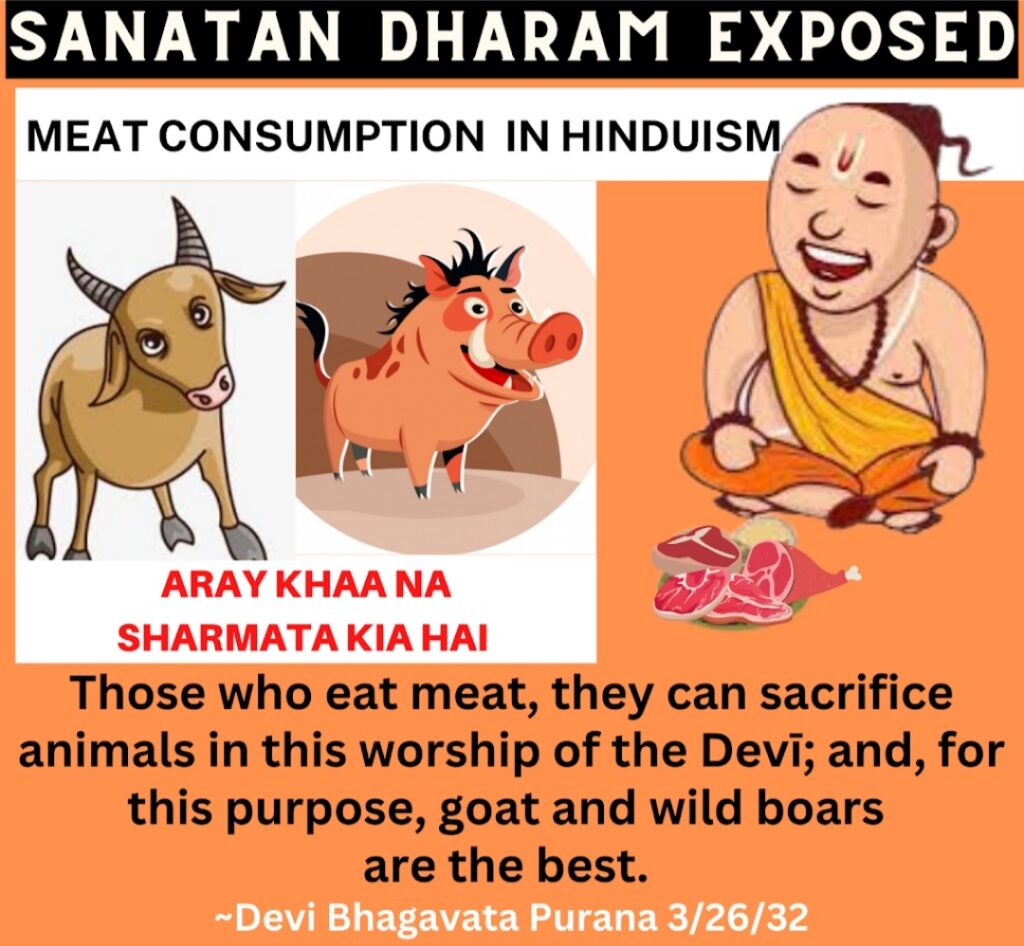 Valmiki Ramayana 2:56-22
Oh, Lakshmana! Bring the meat of an antelope. We shall perform a purifactory ceremony while entering the house. Which is to be done by those who wish to live long.

Valmiki Ramayana 2:56-26
Then, Lakshmana the strong man and son of Sumitra, killing a holy back antelope, tossed it in an ignited fire.

Valmiki Ramayana 1:49:7
This ram that is being offered to you shall now be gelded to give its testes to Indra, and though this ram is deprived of its organ it will be complete and it endows complete satisfaction to you. To those humans who hereafter offer testes-less rams in sacrifices for the purpose of your gratification, you shall truly offer them plentiful and unmitigated benefits. Thus Agni, the Fire-god spoke to manes.

Rig Veda 10.91.14
I offer graceful praise with all my heart to Agni, the drinker of water, whose back is sprinkled withSoma, the ordainer (of the rite), to whom vigorous horses and bulls and barren cows and sheep are consignedas burnt offerings.

Atharva Veda 9.4.9
Brahman gives a thousand who offers up the Bull as his oblation.

Atharva Veda 9.4.18
All Gods promote the Brahman who offers the Bull in sacrifice.

Valmiki Ramayana 96:1-2
Having shown Mandakini River in that manner to Seetha, the daughter of Mithila, Rama set on the hill-side in order to gratify her appetite with a piece of flesh, Rama, whose mind was devoted to righteousness stayed there with Seetha, saying; “This meat is fresh, this is savoury and roasted in the fire.

Rig Veda 10.86.13-14
Vrsakapi speaks: O mother of Vrsakapi, wealthy, possessing excellent sons, possessingexcellent daughters-in-law, let Indra eat your bulls, (give him) the beloved and most delightful ghī, Indra is aboveall the world, Indra speaks: The worshippers dress for me fifteen (and) twenty bulls; I eat them and (become) fat,they fill both sides of my belly; Indra is above all the world.

Manusmriti Verse 5.30
The eater incurs no sin by eating, even daily, such animals as are eatable: since the eater as well as the eaten animals have been created by the creator himself.

Manusmriti 5:35
But when invited according to law, if a man does not eat meat, he becomes, after death, a beast, during twenty- one births.

Padma Purana Book 3 Chapter 56 Verses 31b-46 O best ones, Prajapati Manu has said that these animals with five claws may be always eaten: alligator, tortoise, hare, rhinoceros, porcupine. He may also eat fish with scales, and the flesh of (the deer called) ruru after having presented them to deities and brahmanas, and not otherwise. O best brahmanas, so also (the flesh of) a peacock, a patridge, a pigeon, a cataka, rhinoceros, a crane, a swan. Thus said Prajapati (Manu). These fish, viz. (the glittering fish) śapharī, siṃhatuṇḍa, paṭhīna and rohita are directed as fit to be eaten. With a desire (to retain the status) as a twice-born he should eat the flesh of these after it is sprinkled over; even if he is about to lose his life he should duly use it. He should not at all eat flesh. He who eats what remains, is not smeared (with sin). If he is weak, he should eat flesh as medicine, or by an order or for sacrificial purposes. He, who would give up flesh when invited at a sraddha or a rite in honour of a deity, goes to (i.e. lives) in hell for as many years as the number of hair of the beast.

Manusmriti 5:18
Among five-nailed animals they declare the porcupine, the hedge-hog, the alligator, the rhinoceros, the tortoise and the hare, as fit to be eaten; as also all animals having one line of teeth. except the camel.