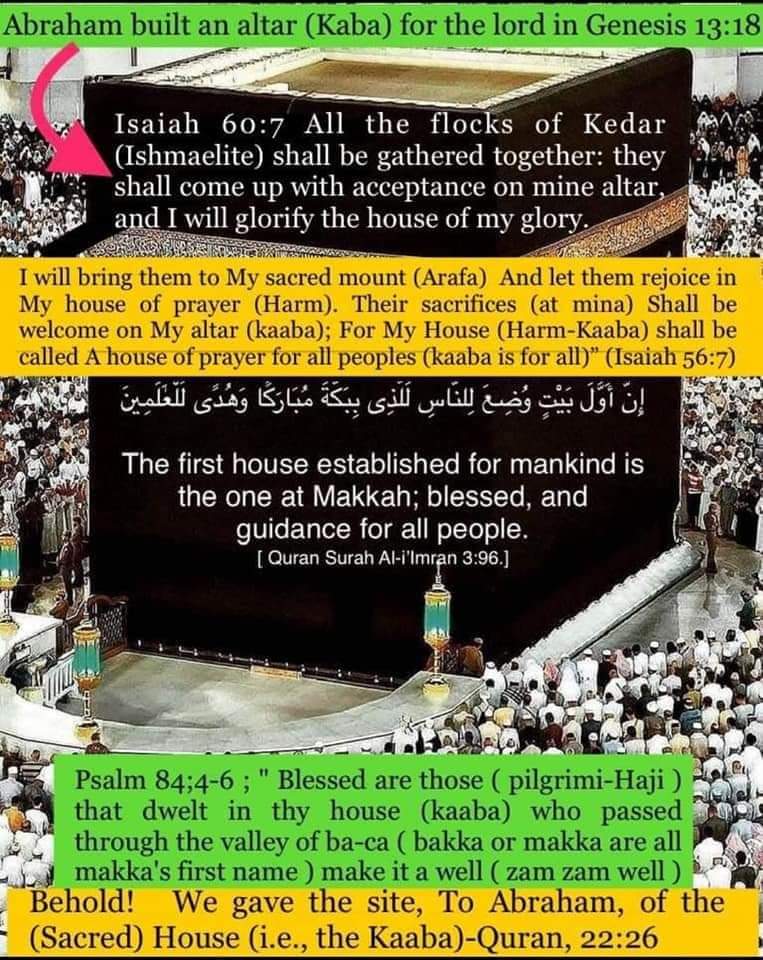 📖Psalm 84-1-6
How lovely is your dwelling place, Lord Almighty, My soul yearns,even faints, for the courts of the Lord, my heart and my flesh cry out for the living God, Even the sparrow has found a home, and the swallow a nest for herself, where she may have her young—a place near your altar,Lord Almighty, my King and my God, Blessed are those who dwell in your house, they are ever praising you.
whose hearts are set on pilgrimage, As they pass through the 👉Valley of Baka,👈 they make it a place of springs the autumn rains also cover it with pools.

Blessed are those who dwell in your house; they are ever praising you: Millions of Muslims go to Makkah every year for Umrah and pilgrimage. They spend several days occupying all their time praising God and fully submitting to Him. They are blessed because they sacrifice money and everything to visit and dwell in the House of God, Muslims are ever praising and glorifying God in their prayers, and supplications. They also start anything in His name. During their visits to His house for pilgrimage they sing:

📖O, my Lord, here I am. Here I am associating no partners to You. Verily, all praise is for You. Every bounty is from You and all Sovereignty is Yours. You have no partner.

Blessed are those whose strength is in you, whose hearts are set on pilgrimage. Muslim pilgrims dwelling in the Holy House of God in Makkah, ask God for forgiveness. They drive their strength by fully relying on Him.

Releted : Is Kaaba Mentioned in The BIBLE Part 2

📖Quran 3:96
Indeed, the first House [of worship] established for mankind was that at Baka – blessed and guidance for the worlds.

📖Quran 17:37
Sahih International
Our Lord, I have settled some of my descendants in an uncultivated valley near Your sacred House, our Lord, that they may establish prayer. So make hearts among the people incline toward them and provide for them from the fruits that they might be grateful.

Paran refers to Makkah in the Bible Paran was the habitat of Hagar and Ishmael, Makkah is also referred to as “Paran” in the Bible. Ishmael and his mother Hagar settled in the desert of Paran after Abraham left them.👇

📖Genesis 16:9-11
Then the angel of the LORD told her, “Go back to your mistress and submit to her.The angel added, “I will increase your descendants so much that they will be too numerous to count.” The angel of the LORD also said to her: “You are now pregnant and you will give birth to a son. You shall name him Ishmael, for the LORD has heard of your misery.

📖Genesis 21:17-18
God heard the boy crying, and the angel of God called to Hagar from heaven and said to her, “What is the matter, Hagar? Do not be afraid; God has heard the boy crying as he lies there. Lift the boy up and take him by the hand, for I will make him into a great nation. Then God opened her eyes and she saw a well of water. So she went and filled the skin with water and gave the boy a drink. God was with the boy as he grew up. He lived in the desert and became an archer. And he dwelt in the wilderness of Paran: and his mother took him a wife out of the land of Egypt.

📖Isaiah 35:6-7
Then will the lame leap like a deer, and the mute tongue shout for joy. Water will gush forth in the wilderness and streams in the desert, And the parched ground shall become a pool, and the thirsty land springs of water: in the habitation of dragons, where each lay, shall be grass with reeds and rushes.

📖Quran 95:1-3
By the fig and the olive ˹of Jerusalem˺, and Mount Sinai, and this secure city ˹of Mecca˺

Footnote
This passage refers to the land of figs and olives where Jesus (ﷺ) lived, Mount Sinai where Moses (ﷺ) communicated with Allah, and the city of Mecca where the Prophet (ﷺ) started his mission. A similar reference can be found in Deuteronomy 33:1, ˹Moses proclaimed:˺ “The Lord came from Sinai. Rising from Seir upon us, he [sic] shone forth from Mount Paran. Seir is a mountain near Jerusalem, and Paran is a mountain near Mecca.

The descendants of Ishmael and his son Kedar are the Arabs, who have lived since that time until now in Paran.

📖Deuteronomy 33:2
This is the blessing that Moses the man of God pronounced upon the Israelites before his death. He said: “The Lord came from Sinai(Moses), And dawned on them from Seir(Jesus); He shone forth from Mount Paran (Muhmamhad), And He came from the midst of ten thousand holy ones; At His right hand there was flashing lightning for them.

Ishmael and his descendants have lived in Paran. Muhammad (PBUH), the descendant of Ishmael and Kedar, is the only prophet who appeared in the wilderness of Paran. Therefore, God shines forth from Paran, through His message of Islam to Muhammad (PBUH).

📖Isaiah 60:1-7
Arise, shine, for your light has come, and the glory of the LORD rises upon you, See, darkness covers the earth and thick darkness is over the peoples, but the LORD rises upon you and his glory appears over you, And the Gentiles shall come to thy light, and kings to the brightness of thy rising, Lift up your eyes and look about you: All assemble and come to you; your sons come from afar, and your daughters are carried on the hip, Then you will look and be radiant, your heart will throb and swell with joy; the wealth on the seas will be brought to you, to you the riches of the nations will come, Herds of camels will cover your land, young camels of Midian and Ephah. And all from Sheba will come, bearing gold and incense and proclaiming the praise of the LORD, All Kedar’s flocks will be gathered to you, the rams of Nebaioth will serve you; they will be accepted as offerings on my altar, and I will adorn my glorious temple.

Makkah is forbidden for the unbelievers

📖Isaiah 35:8
And a highway will be there; it will be called the Way of Holiness; it will be for those who walk on that Way. The unclean will not journey on it; wicked fools will not go about on it.

Non-Muslims are not allowed to enter the Holy City of Makkah, exactly as described above.

📖Quran 9:28
O you who have believed, indeed the polytheists are unclean, so let them not approach al-Masjid al-Haram after this, their [final] year. And if you fear privation, Allah will enrich you from His bounty if He wills. Indeed, Allah is Knowing and Wise.

📖John 4:19-21
“Sir,” the woman said, “I can see that you are a prophet, Our ancestors worshiped on this mountain, but you Jews claim that the place where we must worship is in Jerusalem, “Woman,” Jesus replied, “believe me, a time is coming when you will worship the Father neither on this mountain nor in Jerusalem.

📖Matthew 21:42-43
Jesus said to them, “Have you never read in the Scriptures: ‘the stone that the builders rejected has become the cornerstone; this was the Lord’s doing, and it is marvellous in our eyes’? Therefore I tell you, the kingdom of God will be taken away from you and given to a people producing its fruits.

📖Psalm 118:22-23
The stone that the builders rejected has become the cornerstone. This is the Lord’s doing; it is marvellous in our eyes.

The cornerstone of the kingdom of God is his straight Path, Islam. It has been given through the Prophet Muhammad (PBUH) to the Muslims who represent today one-fourth of the population of the world.

📖John 15:26
But when the Comforter is come, whom I will send unto you from the Father, even the Spirit of truth, which proceeds from the Father [Lord], he will testify of me.

The comforter and the spirit of truth in John 15:26 is none other than prophet Muhammad, the spirit was proceeds by God Isaiah 42 Quran 4:52 and the spirit is creation of God, exemplified in Ezekiel 36:27 And I will put my Spirit in you and move you to follow my decrees and be careful to keep my laws.

📖Quran 4:52
And thus We have revealed to you an inspiration/Spirit of Our command. You did not know what is the Book or [what is] faith, but We have made it a light by which We guide whom We will of Our servants. And indeed, [O Muhammad], you guide to a straight path

📖John 14:26
the Comforter, the Holy Spirit, whom the [Lord] will send in my name, he will teach you all things, and bring all things to your remembrance, whatsoever I have said to you.

📖John 16:13
Howbeit when he, the Spirit of truth is come, he will guide you into all truth: for he shall not speak of himself; but whatsoever he shall hear, that shall he speak: and he will shew you things to come.

This prophecy in John 16:13 and John 15:26 refers to none other than Prophet Muhammad.