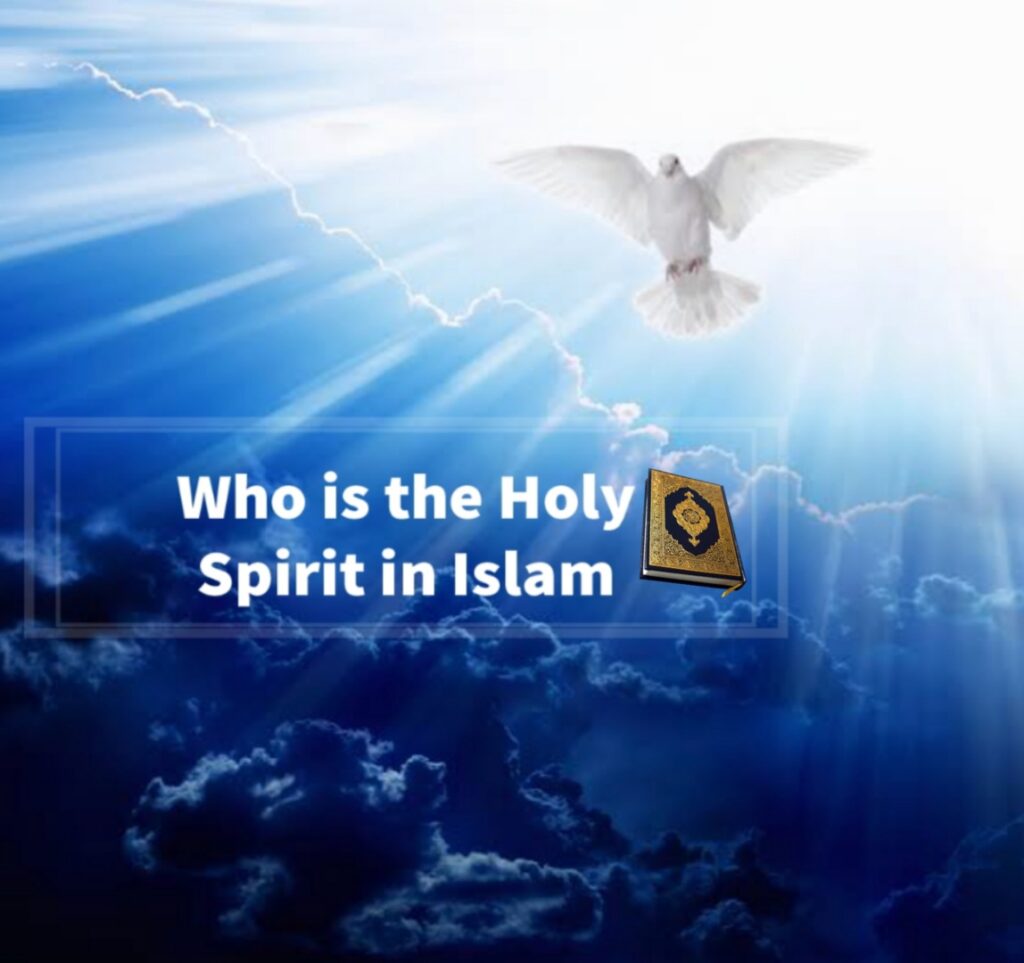 Who is the Holy Spirit in Islam

In Islam, the Holy Spirit (Arabic: الروح القدس‎, ar-Ruh al-Qudus) is generally referred to as the “Angel Gabriel.” Gabriel is considered one of the main angels in Islam and is believed to have been the medium through which Allah revealed the Quran to the Prophet Muhammad. Gabriel is also considered to be the angel who brought Allah’s message to other prophets in Islam, including the Prophet Ibrahim (Abraham), Prophet Isa (Jesus), and Prophet Musa (Moses).

The Holy Spirit is mentioned several times in the Quran. Some relevant verses include:

📖Quran 16:102
Say, [O Muhammad], “The Holy Spirit [i.e., referred to as the power of Archangel Gabriel, is another name for Gabriel according to Quran 2:97-99] has brought it down from your Lord in truth to make firm those who believe and as guidance and good tidings to the Muslims.

📖Quran 2:97-99
Say, “Whoever is an enemy to Gabriel – it is [none but] he who has brought the Qur’an down upon your heart, [O Muhammad], by permission of Allah, confirming that which was before it and as guidance and good tidings for the believers, Whoever is an enemy to Allah and His angels and His messengers and Gabriel and Michael – then indeed, Allah is an enemy to the disbelievers, And We have certainly revealed to you verses [which are] clear proofs, and no one would deny them except the defiantly disobedient.

📖Quran 70:4
Sahih International
The angels and the Spirit will ascend to Him during a Day the extent of which is fifty thousand years.

📖Quran 97:4
The angels and the Spirit descend therein by permission of their Lord for every matter.

📖Quran 2:87
And We did certainly give Moses the Torah and followed up after him with messengers. And We gave Jesus, the son of Mary, clear proofs and supported him with the Holy Spirit. But is it [not] that every time a messenger came to you, [O Children of Israel], with what your souls did not desire, you were arrogant? And a party [of messengers] you denied and another party you killed.

📖Quran 2:253
Those messengers – some of them We caused to exceed others. Among them were those to whom Allah spoke, and He raised some of them in degree. And We gave Jesus, the Son of Mary, clear proofs, and We supported him with the Holy Spirit. If Allah had willed, those [generations] succeeding them would not have fought each other after the clear proofs had come to them. But they differed, and some of them believed and some of them disbelieved. And if Allah had willed, they would not have fought each other, but Allah does what He intends.

📖Quran 53:1-13
By the star when it descends, Your companion [Muhammad] has not strayed, nor has he erred, Nor does he speak from [his own] inclination. It is not but a revelation revealed, Taught to him by one intense in strength – One of soundness. And he rose to [his] true form, While he was in the higher [part of the] horizon. Then he approached and descended, And was at a distance of two bow lengths or nearer. And he revealed to His Servant what he revealed, The heart did not lie [about] what it saw, So will you dispute with him over what he saw?

📖Quran 81-19-25
Indeed, the Qur’an is a word [conveyed by] a noble messenger [ Gabriel Quran 53:1-13 ] – [Who is] possessed of power and with the Owner of the Throne, secure [in position], Obeyed there [in the heavens] and trustworthy [ Quran 26:193 ], And your companion is not [at all] mad, And he has already seen [Gabriel] in the clear horizon. And [Muhammad] is not a withholder of [knowledge of] the unseen. And the Qur’an is not the word of a devil, expelled [from the heavens].

📖Quran 69:40-43
Indeed, the Qur’an is the word of a noble Messenger, And it is not the word of a poet; little do you believe. [It is] a revelation from the Lord of the worlds.

📖Quran 66:4
If you two [wives] repent to Allah , [it is best], for your hearts have deviated. But if you cooperate against him – then indeed Allah is his protector, and Gabriel and the righteous of the believers and the angels, moreover, are [his] assistants.

📖Quran 19:16-21
And mention, [O Muhammad], in the Book [the story of] Mary, when she withdrew from her family to a place toward the east. And she took, in seclusion from them, a screen. Then We sent to her Our Spirit/Angel [i.e., Gabriel], and he represented himself to her as a well-proportioned man. And she took, in seclusion from them, a screen. He said, “I am only the messenger of your Lord to give you [news of] a pure boy [i.e., son].She said, “How can I have a boy while no man has touched me and I have not been unchaste?”He said, “Thus [it will be]; your Lord says, ‘It is easy for Me, and We will make him a sign to the people and a mercy from Us. And it is a matter [already] decreed.

📖Quran 21:91
And [mention] the one who guarded her chastity, so We blew into her [garment] through Our Spirit, and We made her and her son a sign for the worlds.

Releted: Who is the Holy Spirit in Bible

Reference to the ‘Holy Spirit’ in the Sunnah

📖Sahih Muslim 2490
A’isha reported that: I heard Allah’s Messenger (ﷺ) as saying to Hassin: Verily Ruh-ul- Qudus would continue to help you so long as you put up a defence on behalf of Allah and His Messenger.

The majority of scholars said that this refers to Gabriel (peace be upon him), and that Allah called him al-Ruh al-Ameen, Ruh al-Qudus and Gabriel.

The Holy Spirit is Creation of God

📖Quran 13:16
Say, “Who is Lord of the heavens and earth?” Say, ” Allah .” Say, “Have you then taken besides Him allies not possessing [even] for themselves any benefit or any harm?” Say, “Is the blind equivalent to the seeing? Or is darkness equivalent to light? Or have they attributed to Allah partners who created like His creation so that the creation [of each] seemed similar to them?” Say, ” Allah is the Creator of all things, and He is the One, the Prevailing.

Gabriel both an angel and a holy spirit. In Islamic tradition, Gabriel is an angel who was sent by Allah to reveal the message of the Quran to the Prophet Muhammad. As such, he is considered a messenger of Allah and is respected and venerated as a holy figure. At the same time, the term “holy spirit” is used to refer to Gabriel in Islamic writings, reflecting his role as a bringer of divine revelation and guidance, Gabriel is considered one of the most prominent and powerful Archangel in the hierarchy of angels.

As interpreted to refer to the Archangel Gabriel. The term Rūḥ al-Qudus is also an epithet referring to the Archangel Gabriel, who is related as the Angel of revelation and was assigned by God to reveal the Qurʼan to the prophet Muhammad and who delivered the Annunciation to Mary. In the two suras in which the Qur’an refers to the angel Gabriel, it does so by name.(Quran 2:97–98, Quran 66:4 ) However, some ahadith and parts of the Qurʼan support to the alternative view. This is not limited only to the Messiah; others were also supported in this way. The Holy Spirit Gabriel, and other angels are different in their nature and functions.