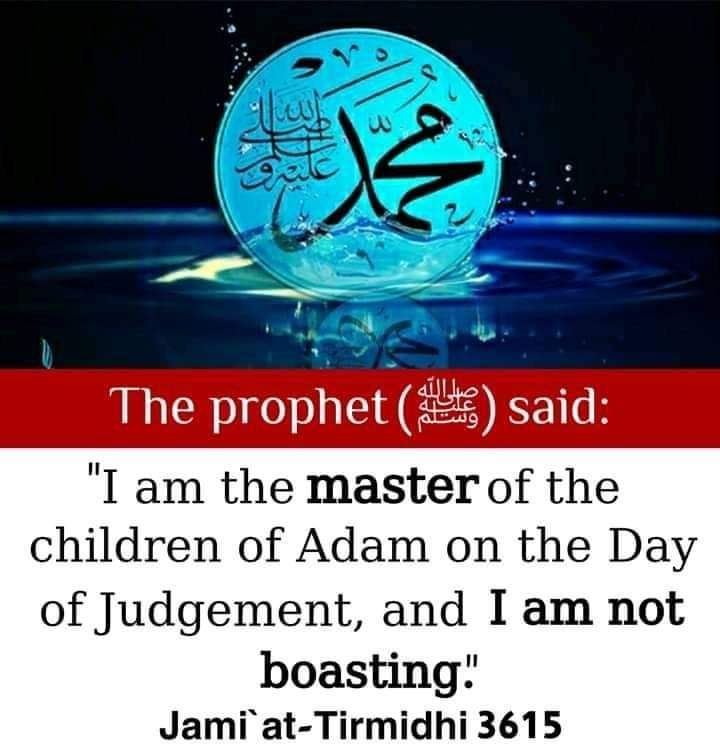 📖Quran 7:172
And [mention] when your Lord took from the children of Adam – from their loins – their descendants and made them testify of themselves, [saying to them], “Am I not your Lord?” They said, “Yes, we have testified.” [This] – lest you should say on the day of Resurrection, “Indeed, we were of this unaware.

📖 Quran 17:85
Sahih International
And they ask you, [O Muhammad], about the soul. Say, “The soul is of the affair of my Lord. And mankind have not been given of knowledge except a little.

📖Quran 17:7
Sahih International
And from [part of] the night, pray with it as additional [worship] for you; it is expected that your Lord will resurrect you to a praised station.

📖Tirmidhi 3611 | Sahih al-Bukhari 4712
The Messenger of Allah (ﷺ) said: “I am the first for whom the earth will be split, and then I will be adorned with garments from the garments of Paradise. Then I will stand at the right of the Throne. No one from the creation will in that place other than I.

📖Tirmidhi 2441
The Messenger of Allah (s.a.w) said ‘Someone came to me from my Lord to give me choice between the half of my Ummah being admitted into Paradise or intercession. So I chose the intercession, and it is for whoever dies and he did not associate anything with Allah.

📖Quran 39:9
Is one who is devoutly obedient during periods of the night, prostrating and standing [in prayer], fearing the Hereafter and hoping for the mercy of his Lord, [like one who does not]? Say, “Are those who know equal to those who do not know?” Only they will remember [who are] people of understanding.

📖Quran 2:254
Sahih International
O you who have believed, spend from that which We have provided for you before there comes a Day in which there is no exchange and no friendship and no intercession. And the disbelievers – they are the wrongdoers.

📖Quran 21:1
[The time of] their account has approached for the people, while they are in heedlessness turning away.

📖Quran 80:33-37
Sahih International
But when there comes the Deafening Blast, On the Day a man will flee from his brother, And his wife and his children, For every man, that Day, will be a matter adequate for him.

📖Quran, 62:08
Indeed, the death from which you flee – indeed, it will meet you. Then you will be returned to the Knower of the unseen and the witnessed, and HE will inform you about what you used to do.

📖Quran 63:13-18
Then when the Horn is blown with one blast, And the earth and the mountains are lifted and leveled with one blow – Then on that Day, the Resurrection will occur, And the heaven will split [open], for that Day it is infirm, And the angels are at its edges. And there will bear the Throne of your Lord above them, that Day, eight [of them], That Day, you will be exhibited [for judgement]; not hidden among you is anything concealed.

📖Quran 39:68-70
And the Horn will be blown, and whoever is in the heavens and whoever is on the earth will fall dead except whom Allah wills. Then it will be blown again, and at once they will be standing, looking on, And the earth will shine with the light of its Lord, and the record [of deeds] will be placed, and the prophets and the witnesses will be brought, and it will be judged between them in truth, and they will not be wronged, And every soul will be fully compensated [for] what it did; and He is most knowing of what they do.

📖Quran 22:5-6
O People, if you should be in doubt about the Resurrection, then [consider that] indeed, We created you from dust, then from a sperm-drop, then from a clinging clot, and then from a lump of flesh, formed and unformed – that We may show you. And We settle in the wombs whom We will for a specified term, then We bring you out as a child, and then [We develop you] that you may reach your [time of] maturity. And among you is he who is taken in [early] death, and among you is he who is returned to the most decrepit [old] age so that he knows, after [once having] knowledge, nothing. And you see the earth barren, but when We send down upon it rain, it quivers and swells and grows [something] of every beautiful kind, That is because Allah is the Truth and because He gives life to the dead and because He is over all things competent.

📖Quran 22:7
And [that they may know] that the Hour is coming – no doubt about it – and that Allah will resurrect those in the graves.

📖Quran 99:1-8
When the earth is shaken with its [final] earthquake And the earth discharges its burdens And man says, “What is [wrong] with it?” – That Day, it will report its news Because your Lord has commanded it. That Day, the people will depart separated [into categories] to be shown [the result of] their deeds. So whoever does an atom’s weight of good will see it, And whoever does an atom’s weight of evil will see it.

📖Quran 3:91
Indeed, those who disbelieve and die while they are disbelievers – never would the [whole] capacity of the earth in gold be accepted from one of them if he would [seek to] ransom himself with it. For those there will be a painful punishment, and they will have no helpers.

📖Quran 32:25
Indeed, your Lord will judge between them on the Day of Resurrection concerning that over which they used to differ.

📖Quran 17:36
And do not pursue that of which you have no knowledge. Indeed, the hearing, the sight and the heart – about all those [one] will be questioned.

📖Quran 21:47
And We place the scales of justice for the Day of Resurrection, so no soul will be treated unjustly at all. And if there is [even] the weight of a mustard seed, We will bring it forth. And sufficient are We as accountant.

📖Quran 2:281
And fear a Day when you will be returned to Allah . Then every soul will be compensated for what it earned, and they will not be treated unjustly.

📖Quran 89:21-22
And you love wealth with immense love,No! When the earth has been leveled – pounded and crushed, And your Lord has come and the angels, rank upon rank.

📖Quran 42:11
[He is] Creator of the heavens and the earth. He has made for you from yourselves, mates, and among the cattle, mates; He multiplies you thereby. There is nothing like unto Him,(There is no similarity whatsoever between the Creator and His creation in essence, in attributes or in deed.) and He is the Hearing, the Seeing.

📖Quran 17:1
Exalted (Above any imperfection or failure to do as He wills.) is He who took His Servant [i.e., Prophet Muḥammad (ﷺ)] by night from al-Masjid al-Ḥarām to al-Masjid al-Aqṣā, (In Jerusalem.) whose surroundings We have blessed, to show him of Our signs. Indeed, He is the Hearing, (Who hears every sound, distinguishes every voice, understands every word, and accepts and responds to supplications.) the Seeing.(After Seeing add ftnt: Who sees and understands all things apparent and unapparent, visible and invisible.

📖Quran 106-6-11
Indeed mankind, to his Lord, is ungrateful, And indeed, he is to that a witness, And indeed he is, in love of wealth, intense, But does he not know that when the contents of the graves are scattered, And that within the breasts is obtained, Indeed, their Lord with them, that Day, is [fully] Acquainted.

📖Quran 59:23
He is Allah—there is no god except Him: the King, the Most Holy, the All-Perfect, the Source of Serenity, the Watcher ˹of all˺, the Almighty, the Supreme in Might,the Majestic. Glorified is Allah far above what they associate with Him ˹in worship.

📖Quran 67:1
Blessed is He for whom sovereignty is in His hand.

📖Quran 54:54-55
Indeed, the righteous will be among gardens and rivers, In a seat of honor near a Sovereign, Perfect in Ability.

📖Quran 5:116-119
And [beware the Day] when Allah will say, “O Jesus, Son of Mary, did you say to the people, ‘Take me and my mother as deities besides Allah ?'” He will say, “Exalted are You! It was not for me to say that to which I have no right. If I had said it, You would have known it. You know what is within myself, and I do not know what is within Yourself. Indeed, it is You who is Knower of the unseen.I said not to them except what You commanded me – to worship Allah , my Lord and your Lord. And I was a witness over them as long as I was among them; but when You took me up, You were the Observer over them, and You are, over all things, Witness.If You should punish them – indeed they are Your servants; but if You forgive them – indeed it is You who is the Exalted in Might, the Wise.Allah will say, “This is the Day when the truthful will benefit from their truthfulness.” For them are gardens [in Paradise] beneath which rivers flow, wherein they will abide forever, Allah being pleased with them, and they with Him.

📖Luke 13:28
There will be weeping there, and gnashing of teeth, when you see Abraham, Isaac and Jacob and all the prophets in the kingdom of God, but you yourselves thrown out.

📖Matthew 7:23
Then I will tell them plainly, ‘I never knew you. Away from me, you evildoers.

📖Quran 5:120
Allah will say, “This is the Day when the truthful will benefit from their truthfulness.” For them are gardens [in Paradise] beneath which rivers flow, wherein they will abide forever, Allah being pleased with them, and they with Him. That is the great attainment.