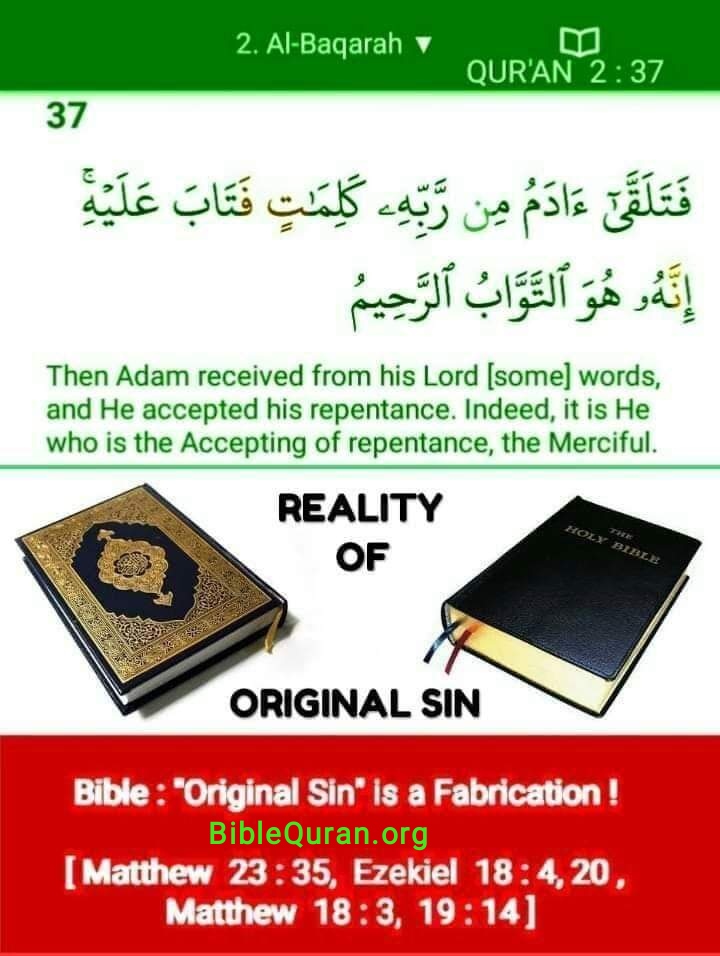 ☪️ In the light of QUR’AN and the BIBLE, reality of “ORIGINAL SIN” ! ✝️

GOD created the first man Adam and his wife Eve from his (Adam’s) rib. GOD commanded, you both to drink and eat in heaven, but not to eat that tree fruits. If you eat the fruits of that tree, you people will become angels and you people will become immortals – Satan tells deceitful words to Eve. Eve then causes Adam to eat the fruits of that tree. Adam sinned by eating the fruits of that tree in disobedience to GOD’s command; This is called “Original Sin”.This original sin of Adam is transmitted to all his descendants. Thus all human beings are sinners by birth – that is one of the believe of Christians.
And Christians say – whoever believes that Jesus died for the sins of all human beings, all their sins will be forgiven !

🤔 Dear Christian, Some verses of the Bible supporting “Original Sin”, before you commenting those – please think about these below Biblcal verses, are these Fabrications ?? Then WHY are you following Fabricated Bible ?? Then WHY These kind of Contradictions in the Bible ?? Dear Christian Please Think Yourself..! 👇

◆ That upon you may come all the righteous blood shed upon the earth, from the blood of RIGHTEOUS_ABEL unto the blood of Zacharias son of Barachias, whom ye slew between the temple and the altar.

—–>> According to Christians believe (original sin), by birth all humans are sinners ! According to their own Bible, it’s a Fabrication, because Bible said – ABEL_is_RIGHTEOUS – Abel is one of the begotten son of Adam (A.S.) ! If original sin is true, Abel is Righteous – how ??
So “Original Sin” – it’s a “Fabrication” !

◆ 1 At that time the disciples came to Jesus and asked, “Who, then, is the greatest in the kingdom of heaven ?”

2 He called a little child to him, and placed the child among them.

3 And he said : “Truly I tell you, UNLESS YOU CHANGE AND BECOME LIKE LITTLE CHILDREN, you will never enter the kingdom of heaven.

◆ Jesus said, “Let the little children come to me, and do not hinder them, FOR THE KINGDOM OF HEAVEN BELONGS TO SUCH AS THESE.”

And Jesus said (Matt. 18 : 3) – “Until you will not change like a child (sinless), YOU WILL NEVER ENTER THE KINGDOM OF HEAVEN.”
According to Jesus words – “Children are Sinless” – So original sin, it’s a Fabrication.

THE HOLY QUR’AN CLARIFICATION AND CONCLUSION ON “ORIGINAL SIN” :

And no bearer of burdens will bear the burden of another. And if a heavily laden soul calls [another] to [carry some of] its load, nothing of it will be carried, even if he should be a close relative. You can only warn those who fear their Lord unseen and have established prayer. And whoever purifies himself only purifies himself for [the benefit of] his soul. And to Allah is the [final] destination.

Every soul, for what it has earned, will be retained

Then Adam received from his Lord [some] words, and He accepted his repentance. Indeed, it is He who is the Accepting of repentance, the Merciful.

★ ISLAM IS THE ONLY WAY TO HEAVEN :

And whoever desires other than Islam as religion – never will it be accepted from him, and he, in the Hereafter, will be among the losers.