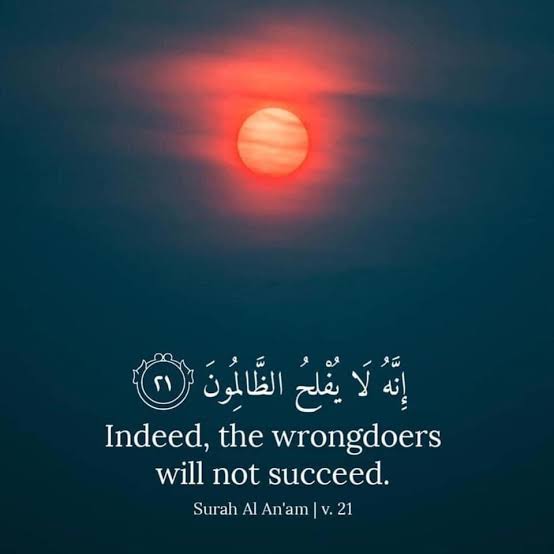 📖Quran 7:171-172
And [mention] when your Lord took from the children of Adam – from their loins – their descendants and made them testify of themselves, [saying to them], “Am I not your Lord?” They said, “Yes, we have testified.” [This] – lest you should say on the day of Resurrection, “Indeed, we were of this unaware, Or [lest] you say, “It was only that our fathers associated [others in worship] with Allah before, and we were but descendants after them. Then would You destroy us for what the falsifiers have done?”

📖Quran 2:28
How can you deny Allah? You were lifeless and He gave you life, then He will cause you to die and again bring you to life, and then to Him you will ˹all˺ be returned.

📖Quran 2:266
Would one of you like to have a garden of palm trees and grapevines underneath which rivers flow in which he has from every fruit? But he is afflicted with old age and has weak offspring, and it is hit by a whirlwind containing fire and is burned. Thus does Allah make clear to you [His] verses that you might give thought.

📖Quran 13:17
He sends down from the sky, rain, and valleys flow according to their capacity, and the torrent carries a rising foam. And from that [ore] which they heat in the fire, desiring adornments and utensils, is a foam like it. Thus Allah presents [the example of] truth and falsehood. As for the foam, it vanishes, [being] cast off; but as for that which benefits the people, it remains on the earth. Thus does Allah present examples.

📖Quran 10:5-6
It is He who made the sun a shining light and the moon a reflected light, and determined for it phases – that you may know the number of years and account [of time]. Allah has not created this except in truth. He details the signs for a people who know, Indeed, in the alternation of the night and the day and [in] what Allah has created in the heavens and the earth are signs for a people who fear Allah.

📖Quran 25:45
Have you not considered your Lord – how He extends the shadow, and if He willed, He could have made it stationary? Then We made the sun for it an indication.

📖Quran 25:47
And it is He who has made the night for you as clothing and sleep [a means for] rest and has made the day a resurrection.

📖Quran 36:40
It is not allowable for the sun to reach the moon, nor does the night overtake the day, but each, in an orbit, is swimming.

📖Quran 30:22
Another of His signs is the creation of the heavens and earth, and the diversity of your languages and colours. There truly are signs in this for those who know.

📖Quran 10:7-8
Indeed, those who do not expect the meeting with Us and are satisfied with the life of this world and feel secure therein and those who are heedless of Our signs – they will have the Fire as a home because of what they have committed.

📖Quran 32:10
And they say, “When we are lost within the earth, will we indeed be [recreated] in a new creation?” Rather, they are, in [the matter of] the meeting with their Lord, disbelievers.

📖Quran 39:15
So worship what you will besides Him.” Say, “Indeed, the losers are the ones who will lose themselves and their families on the Day of Resurrection. Unquestionably, that is the manifest loss.

📖Quran 6:31
Those will have lost who deny the meeting with Allah , until when the Hour [of resurrection] comes upon them unexpectedly, they will say, “Oh, [how great is] our regret over what we neglected concerning it,” while they bear their burdens on their backs. Unquestionably, evil is that which they bear.

📖Quran 22:73
O people, an example is presented, so listen to it. Indeed, those you invoke besides Allah will never create [as much as] a fly, even if they gathered together for that purpose. And if the fly should steal away from them a [tiny] thing, they could not recover it from him. Weak are the pursuer and pursued.

📖Quran 13:41
Have they not seen that We set upon the land, reducing it from its borders? And Allah decides; there is no adjuster of His decision. And He is swift in account.

📖Quran 23:78
And it is He who produced for you hearing and vision and hearts; little are you grateful.

📖Quran 28:46
Surely you do not guide whomever you love, but Allah guides whomever He decides, and he knows best those who will follow guidance.

📖Quran 24:35
Allah is the Light of the heavens and the earth. The example of His light is like a niche within which is a lamp, the lamp is within glass, the glass as if it were a pearly [white] star lit from [the oil of] a blessed olive tree, neither of the east nor of the west, whose oil would almost glow even if untouched by fire. Light upon light. Allah guides to His light whom He wills. And Allah presents examples for the people, and Allah is Knowing of all things.

📖Quran 20:124
And whoever turns away from My remembrance – indeed, he will have a depressed life, and We will gather him on the Day of Resurrection blind.

📖Quran 22:55
while those who have denied continue to be in skepticism about it until the Hour comes upon them suddenly or there comes to them the punishment of a desolate day.

📖Quran 22:31
turning to Allah, away from all that is false, without associating anything with Him. And whoever associates anything with Allah—it is as though he has fallen from the sky so that the birds snatch him or the wind sweeps down with him to a far-off place.

📖Quran 7:51
those who took their religion for distraction, a mere game, and were deluded by worldly life.’ Today We shall ignore them, just as they have ignored their meeting with this Day and denied Our Revelations.

📖Quran 11:18-19
Who is more unjust than the one who forges a lie against Allah? Such people will be presented before their Lord, and the witnesses will say, “These are the ones who lied against their Lord. Lo! the curse of Allah lies on the unjust,the ones who prevent (people) from the way of Allah and seek crookedness in it, and who are deniers of the Hereafter.

📖Quran 7:40
Those who reject Our revelations and are too arrogant to uphold them—the doors of Heaven will not be opened for them, nor will they enter Paradise, until the camel passes through the eye of the needle. Thus We repay the guilty.

📖Quran 45:15
Whoever does a good deed – it is for himself; and whoever does evil – it is against the self. Then to your Lord you will be returned.

📖Quran 68:18
That Day, you will be exhibited [for judgement]; not hidden among you is anything concealed.

📖Quran 39:8
And when adversity touches man, he calls upon his Lord, turning to Him [alone]; then when He bestows on him a favor from Himself, he forgets Him whom he called upon before, and he attributes to Allah equals to mislead [people] from His way. Say, “Enjoy your disbelief for a little; indeed, you are of the companions of the Fire.

📖Quran 8:50
And if you could but see when the angels take the souls of those who disbelieved… They are striking their faces and their backs and [saying], “Taste the punishment of the Burning Fire.

📖Quran 78:40
Indeed, We have warned you of a near punishment on the Day when a man will observe what his hands have put forth and the disbeliever will say, “Oh, I wish that I were dust!.

📖Quran 16:55
so as to deny what We have given them. So enjoy yourselves, for you will come to know.

📖Quran 2:212
Beautified for those who disbelieve is the life of this world, and they ridicule those who believe. But those who fear Allah are above them on the Day of Resurrection. And Allah gives provision to whom He wills without account.

📖Quran 77:46
Eat and enjoy yourselves a little; youpl are indeed criminals.

📖Quran 16:117
A brief enjoyment, then for them is a painful punishment.

📖Quran 40:10:11
Indeed, those who disbelieve will be addressed, “The hatred of Allah for you was [even] greater than your hatred of yourselves [this Day in Hell] when you were invited to faith, but you refused, They will say, “Our Lord, You made us lifeless twice and gave us life twice, and we have confessed our sins. So is there to an exit any way?

📖Quran 40:12
[They will be told], “That is because, when Allah was called upon alone, you disbelieved; but if others were associated with Him, you believed. So the judgement is with Allah , the Most High, the Grand.

📖Quran 39:42
Allah takes the souls at the time of their death, and those that do not die [He takes] during their sleep. Then He keeps those for which He has decreed death and releases the others for a specified term. Indeed in that are signs for a people who give thought.

📖Quran 2:281
And fear a Day when you will be returned to Allah . Then every soul will be compensated for what it earned, and they will not be treated unjustly.

📖Quran 63:10-11
And spend [in the way of Allah ] from what We have provided you before death approaches one of you and he says, “My Lord, if only You would delay me for a brief term so I would give charity and be among the righteous. But never will Allah delay a soul when its time has come. And Allah is Acquainted with what you do.

📖Quran 2:148
Everyone turns to their own direction ˹of prayer˺. So compete with one another in doing good. Wherever you are, Allah will bring you all together ˹for judgment˺. Surely Allah is Most Capable of everything.

📖Quran 2:163
And your god is one God. There is no deity [worthy of worship] except Him, the Entirely Merciful, the Especially Merciful.

📖Quran 112:1-4
Say, ˹O Prophet,˺ “He is Allah—One ˹and Indivisible – Allah, the Eternal Refuge, He neither begets nor is born, And there is none comparable to Him.

📖Quran 3:185
Every soul will taste death, and you will only be given your [full] compensation on the Day of Resurrection. So he who is drawn away from the Fire and admitted to Paradise has attained [his desire]. And what is the life of this world except the enjoyment of delusion.

📖Quran 6:39
But those who deny Our verses are deaf and dumb within darknesses. Whomever Allah wills – He leaves astray; and whomever He wills – He puts him on a straight path.

📖Quran 50:19
And the intoxication of death will bring the truth; that is what you were trying to avoid.

📖Quran 2:39
And those who disbelieve and deny Our signs – those will be companions of the Fire; they will abide therein eternally.