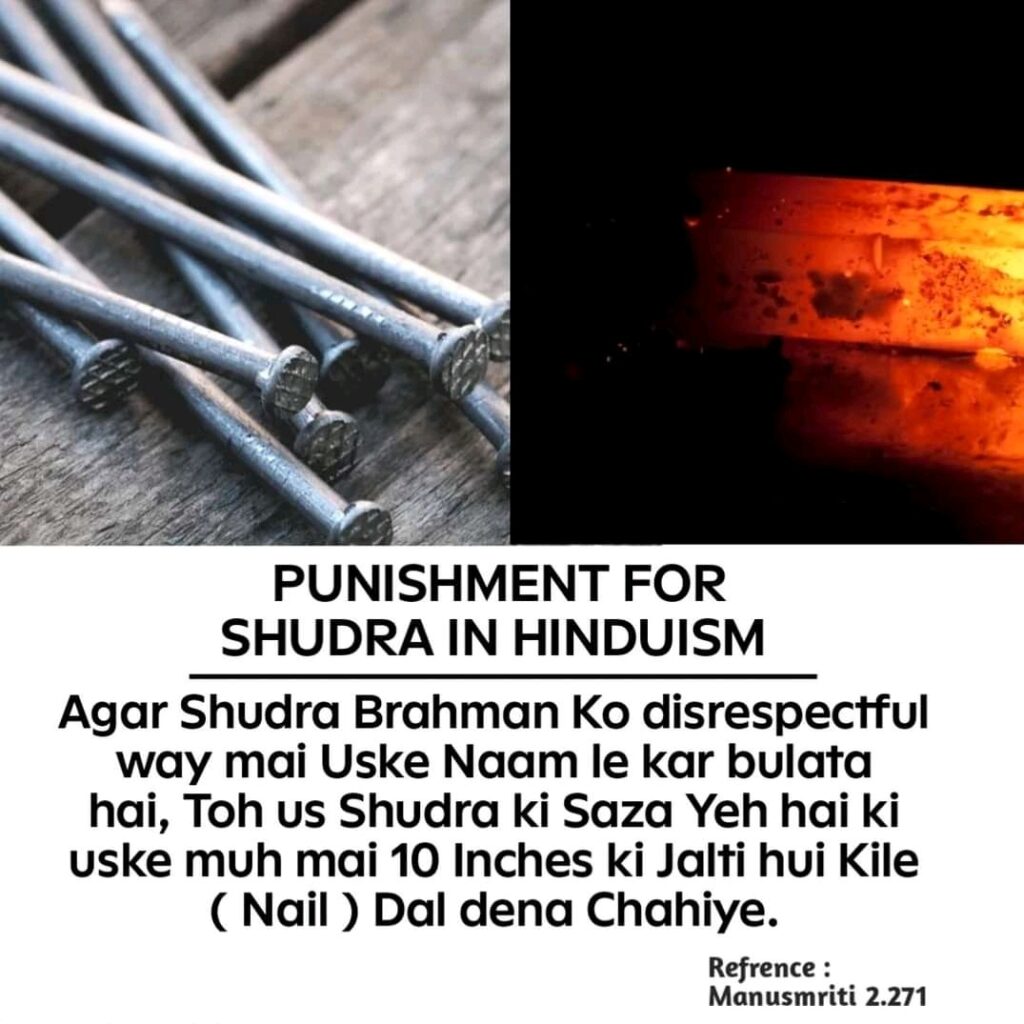 📖Manusmriti Verse 8.272
If through arrogance, he teaches brāhmaṇas their duty, the king shall pour heated oil into his mouth and ears.

📖Manusmriti Verse 8.380
Verily he shall not kill the Brāhmaṇa, even though he be steeped in all crimes; he should banish him from the kingdom, with all his property and unhurt.

If a brahmin commits any kind of crime, he should not be killed.

You should respect brahmin according to hindu religion, if someone kills a brahmin then his punishment is mentioned in this verse.

Manusmriti Verse 3.17
Having placed a Śūdrā woman on his bed, the Brāhmaṇa goes to perdition; and having begotten a son by her, he falls from Brāhmaṇahood itself.

Manusmriti Verse 8.270
If a once-born person insults a twice-born one with gross abuse, he should suffer the cutting off of his tongue; as he is of low origin.

Manusmriti Verse 5.103
One should not have a dead Brāhmaṇa carried by a Śūdra, while his own people are there. For it would be an oblation into fire, defiled by the touch of the Śūdra, and as such not conducive to heaven.

Manusmriti Verse 8.417
The Brāhmaṇa may confidently have recourse to seizing the goods of the Śūdra; as the latter has no property, and his property is meant to be seized by the master.

Verse 8.270 & Verse 5.103 Explain, Once-born person’—the Śūdra; if he ‘insults’—abuses—the higher castes—‘with gross abuse’—harsh words attributing heinous offences,—suffers ‘the cutting off of the tongue. Verse 5.103 While his own people are there’—i.e., men of the same caste. The use of the term ‘oblation into fire’ implies that the body should not also be burnt by the Śūdra, Many other verses related to the caste system in Hinduism are also mentioned in their different holy books.

📖Rig Veda 10.90.12
His mouth became the Brāhmaṇa, his arms became the Rājanya, his thighs became the Vaiśya;the Śūdra was born from his feet.