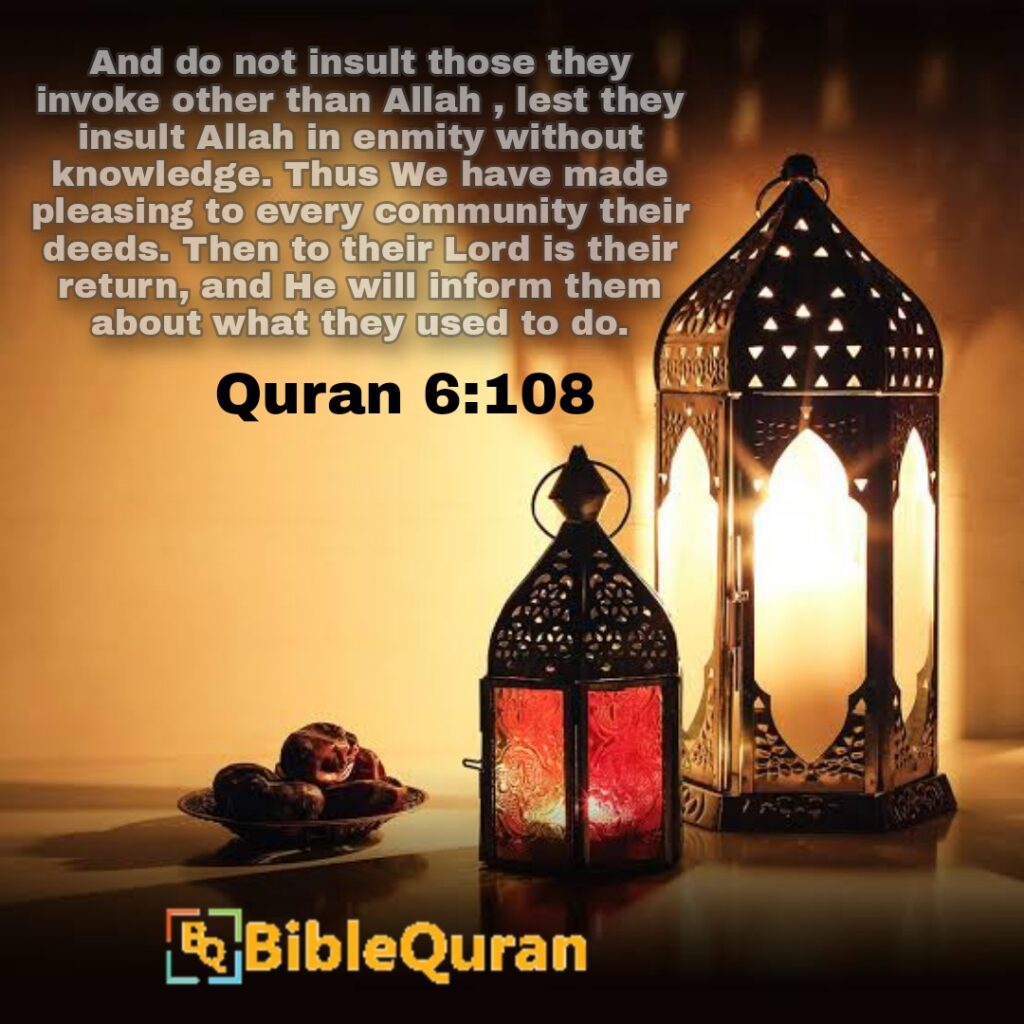 📖Bible Leviticus 26:30
And I will destroy your high places, and cut down your images, and cast your carcases upon the carcases of your idols, and my soul shall abhor you.

📖 Bible Psalm 106:34-38
They did not destroy the peoples as the LORD had commanded them,but they mixed with the nations and learned to do as they did. They worshiped their idols, which became a snare to them. They sacrificed their sons and their daughters to false gods. They shed innocent blood, the blood of their sons and daughters, whom they sacrificed to the idols of Canaan, and the land was desecrated by their blood.

📖 Bible Deuteronomy 32:17-18
They made him jealous with their foreign gods and angered him with their detestable idols. They sacrificed unto devils, not to God; to gods whom they knew not, to new gods that came newly up, whom your fathers feared not.

📖Quran 2:102
They followed what the devils used to recite in the reign of Solomon; and it was not Solomon who became an infidel, but the devils did become infidels, teaching people magic, and what had been sent down to the two angels, Hārūt and Mārūt, in Babylon. And these two did not teach anyone without first having said (to him), “We are but a trial, so do not go infidel. Then, they used to learn from them that with which they could cause separation between a man and his wife. But they were not to bring harm through it to anyone without the will of Allah. They used to learn what harmed them and did no good to them; and they certainly knew that he who buys it has no share in the Hereafter. And, indeed, vile is the thing for which they sold themselves away. If only they knew!

📖Quran7:138
And We brought the Children of Israel across the sea, and they came unto a people who were given up to idols which they had. They said: O Moses! Make for us a god even as they have gods. He said: He said, “You are really an ignorant people.

📖Quran 2:40
O Children of Isrā’īl (the Israelites), remember My blessing that I conferred upon you, and fulfill the covenant with Me, and I shall fulfill your covenant, and have awe of Me alone.

📖Quran 17:3
O you, the progeny of those whom We put on board with Noah. Surely, He was a very grateful servant.

📖 Bible Exodus 20:3
“You shall have no other gods before me.

📖Quran 20:14 Surely I, Ever I, am Allah; there is no god except I; so worship Me, and keep up the prayer for My Remembrance.

📖Quran 3:65
People of the Book, why do you argue about Abraham when the Torah and the Gospels were not revealed until after his time? Do you not understand?

📖Quran 16:20
But those ˹idols˺ they invoke besides Allah cannot create anything—they themselves are created.

📖Quran 25:3
Yet they have taken besides Him gods who cannot create anything but are themselves created. Nor can they protect or benefit themselves. Nor can they control life, death, or resurrection.

📖Quran 16:24
And when it is said to them, “What has your Lord sent down?” They say, “Legends of the former peoples.

📖Quran 29:25
Verily You have chosen idols instead of God but your love for them will only last for the present life: on the Day of Resurrection, you will disown and reject one another. Hell will be your home and no one will help you.’

📖Quran 14:30
And they have set up rivals to Allah to mislead people from His way. Say, ‘Enjoy yourselves a while, then, surely, your journey is toward the Fire.

📖Quran 10:28
And, the Day We will gather them all together – then We will say to those who associated others with Allah, “[Remain in] your place, you and your ‘partners.'” Then We will separate them, and their “partners” will say, “You did not used to worship us,

📖Quran 21:98
Verily you and the gods you worshipped beside Allah are the fuel of Hell. All of you are bound to arrive there.

✍️Footnote
We learn from traditions that Abdullah bin Azzaara raised an objection in this connection, saying: According to this not only our deities but Prophets Jesus and Uzair (peace be upon them) and the Angels also will become fuel for Hell because they are also worshiped. The Prophet (peace be upon him) replied: Yes, everyone who would approve of his own worship instead of Allah’s will go to Hell along with those who worshiped him. He meant to say: There is no reason why Prophets Jesus and Uzair (peace be upon them) and the Angels should go to Hell because they never approved that they should be worshiped instead of Allah, and were not responsible for this. On the other hand, they taught people to worship Allah alone. Of course, those who tried to become deities and became partners in the shirk of others will certainly go to Hell along with their worshipers. Likewise those, who induced others to take deities other than Allah, will go to Hell. Satan comes under this category for he induces others to make deities. Thus it is Satan who is made the real deity whom they obey and commit shirk. Besides this, idols of stone and wood and other accessories of shirk will also be thrown into Hell along with the mushriks so that the latter should see that their deities were becoming a cause of the intensity of their torture of fire instead of becoming their intercessors.)

📖Quran 9:34
O you who have believed, indeed many of the scholars and the monks devour the wealth of people unjustly and avert [them] from the way of Allah. And those who hoard gold and silver and spend it not in the way of Allah – give them tidings of a painful punishment.

📖Quran 9:35
The Day when it will be heated in the fire of Hell and seared therewith will be their foreheads, their flanks, and their backs, [it will be said], “This is what you hoarded for yourselves, so taste what you used to hoard.

Allah says to the Idol Worshippers:

📖Quran 39:17
And those who eschew the worship of false gods and turn to ALLAH – for them is glad tidings. So give good tidings to MY servants.

📖Quran 39:18 Who listen to the Word and follow the best thereof. It is they whom ALLAH has guided, and it is they who are really endowed with understanding.

📖Quran 2:69
Surely, those who believed in Allah, and those who are Jews, and Christians, and Sabians, -whosoever believes in Allah and in the Last Day, and does good deeds – all such people will have their reward with their Lord, and there will be no reason for them to fear, nor shall they grieve.

📖Quran 66:8
O you who believe, turn to Allah with a faithful repentance. It is hoped from your Lord that he will write off your faults, and will admit you to the gardens beneath which rivers flow, on the Day when Allah will not disgrace the Prophet and those who believed with him. Their light will run before them and to their right hands. They will say, “Our Lord, perfect for us our light, and forgive us. Indeed you are powerful over every thing.

📖Quran 7:156
And decree for us in this world [that which is] good and [also] in the Hereafter; indeed, we have turned back to You.” [ Allah ] said, “My punishment – I afflict with it whom I will, but My mercy encompasses all things.” So I will decree it [especially] for those who fear Me and give zakah and those who believe in Our verses.

📖Quran 33:43-44
He is such that He and His angels send blessings to you, so that He brings you out from all sorts of darkness into Light; and He is Very-Merciful to the believers.Their greeting, on the Day when they will meet Him, will be, “Salām ” . And He has prepared for them a noble reward.

📖Quran 43:22
Rather, they say, “Indeed, we found our fathers upon a religion, and we are in their footsteps [rightly] guided.

📖Quran 43:45
Ask Our messengers whom We sent before you whether We had appointed gods to be worshipped besides RaHmān.

📖Quran 35:40
Say, “Tell me about your (presumed) co-gods whom you invoke beside Allah. Show me that part of the earth that they have created. Or do they have a share in the (creation) of the heavens?” Or have We given them a book so that they are upon a clear proof from it? No, but the wrongdoers promise one another nothing but delusion.

📖Quran 31:30
That is because Allah is the only Real One and what they invoke other than Him is false and Allah is the High, the Great.

📖Quran 36:5
[This is] a revelation of the Exalted in Might, the Merciful.

📖Quran 36:6
That you may warn a people whose forefathers were not warned, so they are unaware.

📖Quran 36:7
Already the word [i.e., decree] has come into effect upon most of them, so they do not believe.

📖Quran 46:27
And We have already destroyed what surrounds you of [those] cities, and We have diversified the signs [or verses] that perhaps they might return [from disbelief].

A final word of warning to the Idolaters:

📖Quran 6:164
Say, ˹O Prophet,˺ “Should I seek a lord other than Allah while He is the Lord of everything?” No one will reap except what they sow. No soul burdened with sin will bear the burden of another. Then to your Lord is your return, and He will inform you of your differences.

And I pray to the Lord for you:

📖Quran 40:7
Those [angels] who carry the Throne and those around it exalt [ Allah ] with praise of their Lord and believe in Him and ask forgiveness for those who have believed, [saying], “Our Lord, You have encompassed all things in mercy and knowledge, so forgive those who have repented and followed Your way and protect them from the punishment of Hellfire.