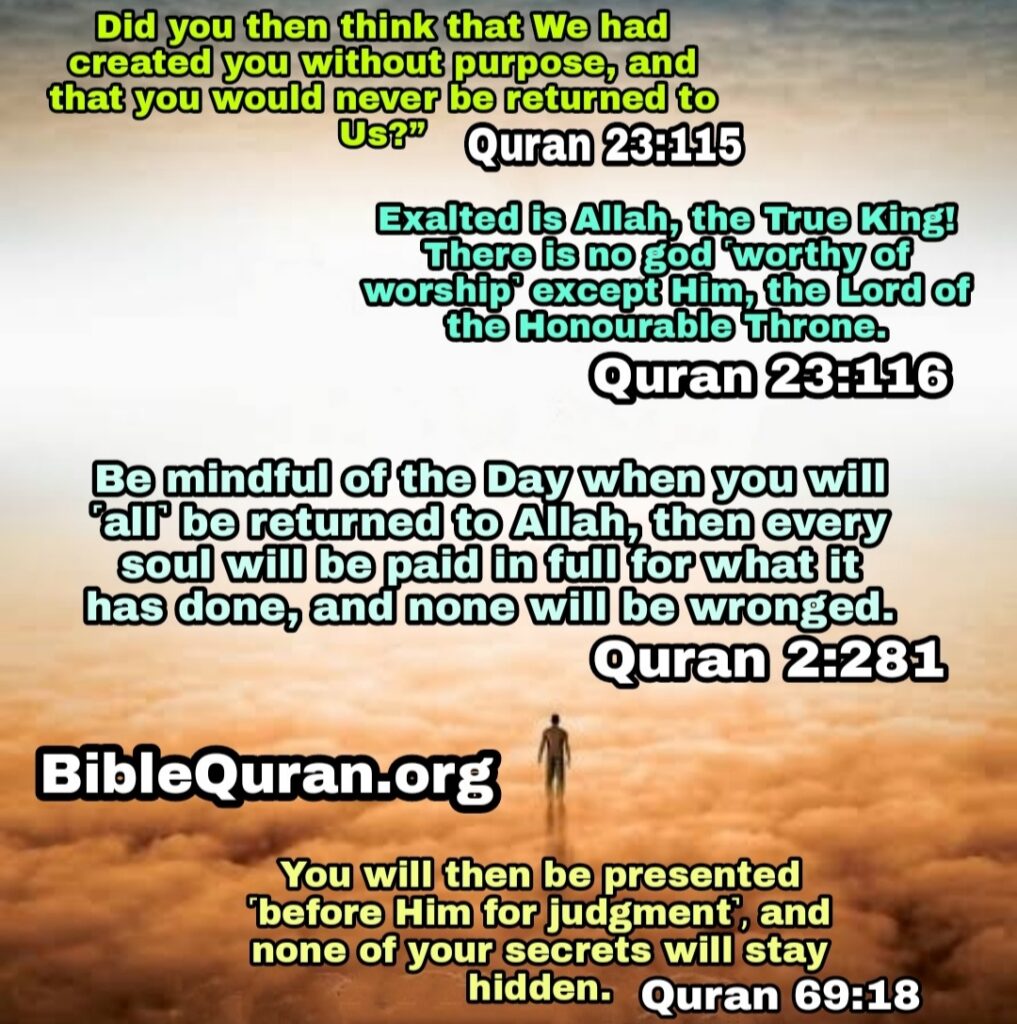 ✍️God created us for the purpose of worshipping Him, Alone and without any partners. Humans were created to submit to God through worship. The road to submission is available only through Islam and therefore, only by becoming Muslim does one gain the opportunity to submit to God. God calls on humans to use their intellect and reflect on the world around them. A foundational message in the Quran is its emphasis on righteous conduct built on firm belief and love for God. Allah says:

☪️Quran 30:30
So be steadfast in faith in all uprightness ˹O Prophet˺—the natural Way of Allah which He has instilled in ˹all˺ people. Let there be no change in this creation of Allah. That is the Straight Way, but most people do not know.

✍️God made human beings God’s agents or viceroys on the earth and entrusted them with the responsibility to civilize the land. The Qur’an describes the moment of creation as the moment in which humanity was entrusted with heavy responsibility. God gave humanity the blessing of rationality and the ability to differentiate between right and wrong. Allah says:

☪️Quran 17:70
And We have certainly honored the children of Adam and carried them on the land and sea and provided for them of the good things and preferred them over much of what We have created, with [definite] preference.

✍️The Quran acknowledges human desires while reminding individuals to cultivate their souls. In addition, The Quran encourages humankind to recognize the signs of God’s existence in the precise order of the universe and the careful placement of every object in the total scheme of creation.

God knows us better than we know ourselves:

✍️The purpose of this life is the worship of God, this life is a test. A test for us, will we worship God, or will we forget Him. This is where our focus has to begin. However, the Almighty is not in need of human worship. God is Perfect. He alone exists without any needs. All created beings have needs. Consequently, it is humankind that needs to worship God. Allah says:

☪️Quran 33:70
O you who have believed, fear Allah and speak words of appropriate justice.

☪️Quran 82:7-8
Who created you, fashioned you, and perfected your design,In whatever form He willed has He assembled you.

✍️God had created a human from water and dust. Human should be modest, also should get rid of his arrogance when he realizes that his origin is from the clay followed by unseen sperm. Scientists discovered that the human body consists of some elements which are the same elements as in dust. Allah says:

☪️Quran 18:23-24
And never say of anything, “Indeed, I will do that tomorrow,Except [when adding], “If Allah wills.” And remember your Lord when you forget [it] and say, “Perhaps my Lord will guide me to what is nearer than this to right conduct.

✍️One of the latest discoveries is that some kinds of clay contain antibiotics which are able to kill the most obstinate kind of germs. Hence they are thinking to use dust to sterilize hospitals!! So that God gave a human a big honour when He is blessed and exalted created him from dust.

☪️Quran 71:4
He will forgive your sins, and delay your end until the appointed time. ( Meaning, it is out of Allah’s mercy that He does not hasten your punishment but allows you more time to repent.) Indeed, when the time set by Allah comes, it cannot be delayed, if only you knew!.

☪️Quran 3:19
Indeed, the religion in the sight of Allah is Islam. And those who were given the Scripture did not differ except after knowledge had come to them – out of jealous animosity between themselves. And whoever disbelieves in the verses of Allah , then indeed, Allah is swift in [taking] account.

☪️Quran 95:4
Indeed, We created humans in the best form.

☪️Quran 29:6
And whoever strives only strives for [the benefit of] himself. Indeed, Allah is free from need of the worlds.

☪️Quran 22:73
O people, an example is presented, so listen to it. Indeed, those you invoke besides Allah will never create [as much as] a fly, even if they gathered together for it [i.e., that purpose]. And if the fly should steal from them a [tiny] thing, they could not recover it from him. Weak are the pursuer and pursued. ( A comparison is made here to the worshipper of a false deity and that which he worships.)

☪️Quran 25:3
Yet they have taken besides Him gods who cannot create anything but are themselves created. Nor can they protect or benefit themselves. Nor can they control life, death, or resurrection.

☪️Quran 16:24
And when it is said to them, “What has your Lord sent down?” They say, “Legends of the former peoples.

☪️Quran 29:25
Verily You have chosen idols instead of God but your love for them will only last for the present life: on the Day of Resurrection, you will disown and reject one another. Hell will be your home and no one will help you.’

☪️Quran 64:11
No disaster strikes except by permission of Allah. And whoever believes in Allah – He will guide his heart. And Allah is Knowing of all things.

☪️Quran 51:56
And I did not create the jinn and mankind except to worship me.

☪️Quran 42:11
[He is] Creator of the heavens and the earth. He has made for you from yourselves, mates, and among the cattle, mates; He multiplies you thereby. There is nothing like unto Him, and He is the Hearing, the Seeing.

☪️Quran 112:113
Say, “He is Allah, [who is] One,Allah, the Eternal Refuge. ( He who is absolute, perfect, complete, essential, self-sufficient and sufficient to meet the needs of all creation; the one eternally and constantly required and sought, depended upon by all existence and to whom all matters will ultimately return.)

☪️Quran 21:30
Have those who disbelieved not considered that the heavens and the earth were a joined entity, and then We separated them and made from water every living thing? Then will they not believe?

☪️Quran 25:43
Have you seen the one who takes as his god his own desire? Then would you be responsible for him?

☪️Quran 3:31
Say (O Prophet): “If you really love Allah, then follow me, and Allah shall love you and forgive you your sins. Allah is Most-Forgiving, Very-Merciful.

☪️Quran 39:62
Allah is Creator of all things, and He is Guardian over all things.

☪️Quran 16:18
And if ye would count the favour of Allah ye cannot reckon it. Lo! Allah is indeed Forgiving, Merciful.

☪️Quran 98:7
Those who believe and do good deeds are the best of creation.

☪️Quran 51:56
I created the jinn and humankind only that they might worship Me.

☪️Quran 113:1-2
Say [Prophet], ‘I seek refuge with the Lord of daybreak, against the harm in what He has created.

☪️Quran 39:6
He created you from one soul. Then He made from it its mate, and He produced for you from the grazing livestock eight mates. He creates you in the wombs of your mothers, creation after creation, within three darknesses. That is Allah , your Lord; to Him belongs dominion. There is no deity except Him, so how are you averted?

Why does God need to test us?: God created us and gave us the opportunity to know Him. God knows the future – the point is, for us to live through and experience our lives and make our own choices.

Do we really have a choice?: The fact that God knows our choices does not make it any less voluntary.  But in His Wisdom, He has created us with the ability to choose and made us accountable for our choices.

Why doesn’t God just reveal Himself?: In God’s wisdom, He has chosen to make Himself known through His signs. This is part of the test of this life. He has made it our responsibility to use the abilities He has given us to acknowledge Him.

Why is there suffering in the world?: The fact that different people are tested in different ways through various trials, does not disprove the existence of God nor contradict an all-powerful God. This world is volatile and temporary, however, the full justice in the hereafter, which is everlasting, will more than compensate for any injustices or misfortunes in this life.

Why does God punish people?: No one can disagree with the concept of punishment, which is necessary for justice. God has created us with the ability to choose how we want to live, and in turn, be accountable. Those who sincerely strive to obey God will earn God’s mercy and enter paradise. Allah says:

☪️Quran 17:44
The seven heavens and the earth and everyone in them glorify Him. There is not a single thing that does not celebrate His praise, though you do not understand their praise: He is most forbearing, most forgiving.

✍️Thus, the essential purpose for which humankind was created is the worship of God. However, the Almighty is not in need of human worship. He did not create human beings out of a need on His part. If not a single human worshipped God. Allah says:

☪️Quran 5:5
Today all good things have been made lawful for you. The food of the People of the Book is lawful for you as your food is lawful for them. So are chaste, believing, women as well as chaste women of the people who were given the Scripture before you, as long as you have given them their bride-gifts and married them, not taking them as lovers or secret mistresses. The deeds of anyone who rejects faith will come to nothing, and in the Hereafter he will be one of the losers.

☪️Quran 5:6-7
You who believe, when you are about to pray, wash your faces and your hands up to the elbows, wipe your heads, wash your feet up to the ankles and, if required, wash your whole body. If any of you is sick or on a journey, or has just relieved himself, or had intimate contact with a woman, and can find no water, then take some clean sand and wipe your face and hands with it. God does not wish to place any burden on you: He only wishes to cleanse you and perfect His blessing on you, so that you may be thankful, Remember God’s blessing on you and the pledge with which you were bound when you said, ‘We hear and we obey.’ Be mindful of God: God has full knowledge of the secrets of the heart.

☪️Quran 5:8
so, you who believe, do not violate the sanctity of God’s rites, the Sacred Month, the offerings, their garlands, nor those going to the Sacred House to seek the bounty and pleasure of their Lord––but when you have completed the rites of pilgrimage you may hunt. Do not let your hatred for the people who barred you from the Sacred Mosque induce you to break the law: help one another to do what is right and good; do not help one another towards sin and hostility. Be mindful of God, for His punishment is severe.

✍️He alone exists without any needs. All created beings have needs. Consequently, it is humankind that needs to worship God. In glorifying God, man chooses to be in harmony with the rest of creation which naturally glorifies its Creator.