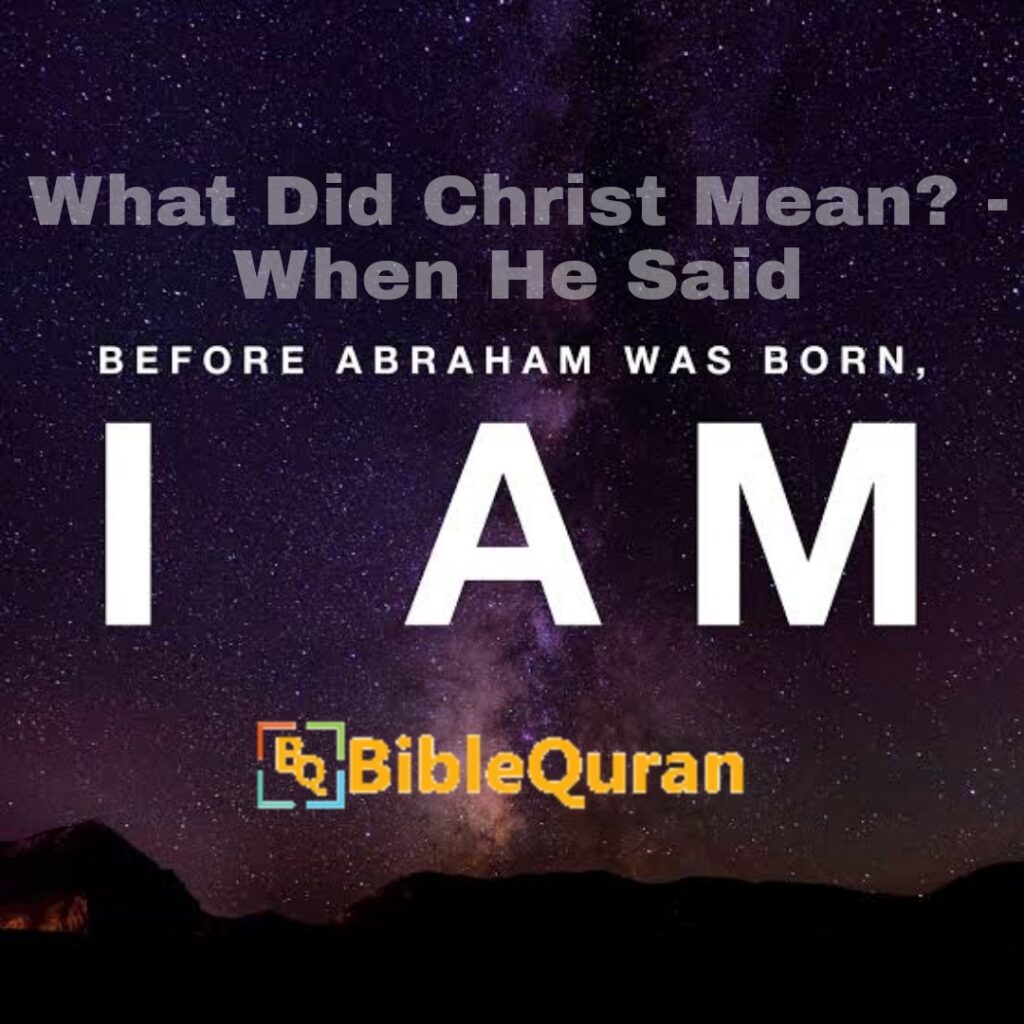 Before Abraham was born I am John 8:58

It is important to note that the content on this website is my personal understanding, which is not related to any Islamic scholar.

Releted : Quran says Jesus is WORD” AND “SPIRIT” FROM GOD. What does that mean?

What is the meaning of before Abraham born was i am ?

📖Quran 3:7
It is He who has sent down to you, [O Muhammad], the Book; in it are verses [that are] precise – they are the foundation of the Book – and others unspecific. As for those in whose hearts is deviation [from truth], they will follow that of it which is unspecific, seeking discord and seeking an interpretation [suitable to them]. And no one knows its [true] interpretation except Allah . But those firm in knowledge say, “We believe in it. All [of it] is from our Lord.” And no one will be reminded except those of understanding.

📖Quran 3:81
Sahih International
And [recall, O People of the Scripture], when Allah took the covenant of the prophets, [saying], “Whatever I give you of the Scripture and wisdom and then there comes to you a messenger confirming what is with you, you [must] believe in him and support him.” [ Allah ] said, “Have you acknowledged and taken upon that My commitment?” They said, “We have acknowledged it.” He said, “Then bear witness, and I am with you among the witnesses.

📖Quran 33:7
And [mention, O Muhammad], when We took from the prophets their covenant and from you and from Noah and Abraham and Moses and Jesus, the son of Mary; and We took from them a solemn covenant.

📖Quran 7:172-174
And [mention] when your Lord took from the children of Adam – from their loins – their descendants and made them testify of themselves, [saying to them], “Am I not your Lord?” They said, “Yes, we have testified.” [This] – lest you should say on the day of Resurrection, “Indeed, we were of this unaware Or [lest] you say, “It was only that our fathers associated [others in worship] with Allah before, and we were but descendants after them. Then would You destroy us for what the falsifiers have done?” And thus do We [explain in] detail the verses, and perhaps they will return.

Similar Verses are found in the old testament 👇

📖Jeremiah 1:4-5
The word of the LORD came to me, saying, Before I formed you in the womb I knew you, before you were born I set you apart; I appointed you as a prophet to the nations.

📖Ephesians 1:4
For he chose us in him before the creation of the world to be holy and blameless in his sight. In love

The four stages mentioned here are

Before birth
During earthly life
Earthly death
And resurrection

📖Quran 2:28
How can you disbelieve in Allah when you were lifeless and He brought you to life; then He will cause you to die, then He will bring you [back] to life, and then to Him you will be returned.

📖Quran 40: 11
They ( Disbelievers) will say ( On the day of Judgement ), “Our Lord, You made us lifeless twice and gave us life twice, and we have confessed our sins. So is there to an exit any way?

In Islam, all souls are believed to have been created in adult form (before earthly life) at the same time God created the father of mankind, Adam. The Quran recounts the story of when the descendants of Adam were brought forth before God to testify that God alone is the Lord of creation and therefore only he is worthy of worship Quran 7:171-173 so that on the Day of Judgement, people could not make the excuse that they only worshipped others because they were following the ways of their ancestors. Humans do not remember, as they are born with an undeveloped mind (leaving only an innate awareness that God exists and is one, known as the Fitra) and he decreed at which point each and every human would be born into the physical world.