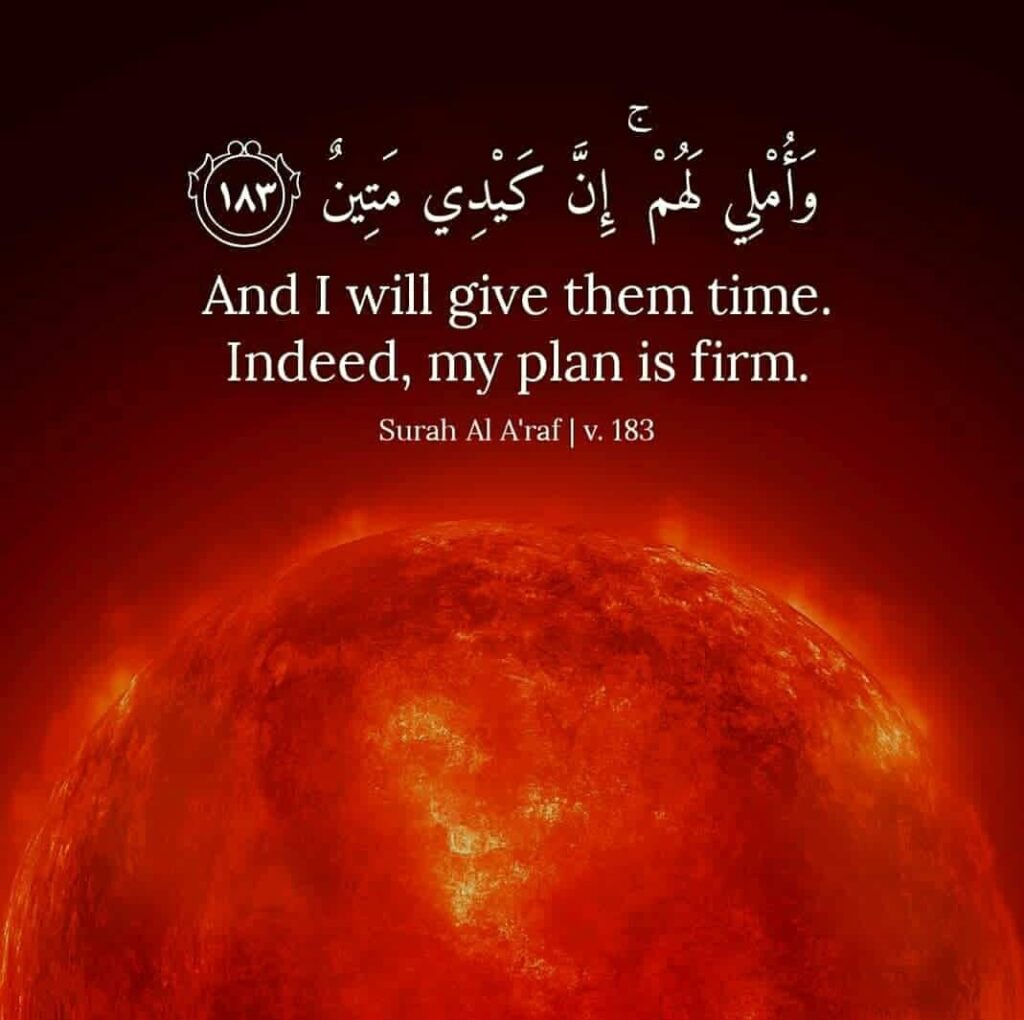 📖Quran 35:15
Sahih International
O mankind, you are those in need of Allah , while Allah is the Free of need, the Praiseworthy.

Releted: Why Allah Created Mankind | What is The purpose of our creation ?

📖Qur’an 51:56-58
And I did not create the jinn and mankind except to worship Me. I do not want from them any provision, nor do I want them to feed Me. Indeed, it is Allāh who is the [continual] Provider, the firm possessor of strength.

📖Quran 29:45
Recite, [O Muhammad], what has been revealed to you of the Book and establish prayer. Indeed, prayer prohibits immorality and wrongdoing, and the remembrance of Allah is greater. And Allah knows that which you do.

📖Quran 82:6
O mankind, what has deceived you concerning your Lord, the Generous.

📖Quran 65:12
It is Allah who has created seven heavens and of the earth, the like of them. [His] command descends among them so you may know that Allah is over all things competent and that Allah has encompassed all things in knowledge.

📖Quran 67:2
[He] who created death and life to test you [as to] which of you is best in deed – and He is the Exalted in Might, the Forgiving –

📖Quran 6:165
And it is He who has made you successors upon the earth and has raised some of you above others in degrees [of rank] that He may try you through what He has given you. Indeed, your Lord is swift in penalty; but indeed, He is Forgiving and Merciful.

📖Quran 16:39
[It is] so He will make clear to them [the truth of] that wherein they differ and so those who have disbelieved may know that they were liars.

📖Quran 10:3-4
Indeed, your Lord is Allah , who created the heavens and the earth in six days and then established Himself above the Throne, arranging the matter [of His creation]. There is no intercessor except after His permission. That is Allah , your Lord, so worship Him. Then will you not remember? To Him is your return all together. [It is] the promise of Allah [which is] truth. Indeed, He begins the [process of] creation and then repeats it that He may reward those who have believed and done righteous deeds, in justice. But those who disbelieved will have a drink of scalding water and a painful punishment for what they used to deny.

📖Quran 4:165
[We sent] messengers as bringers of good tidings and warners so that mankind will have no argument against Allah after the messengers. And ever is Allah Exalted in Might and Wise.

📖Quran 6:155-157
And this [Qur’an] is a Book We have revealed [which is] blessed, so follow it and fear Allah that you may receive mercy – [We revealed it] lest you say, “The Scripture was only sent down to two groups before us, but we were of their study unaware, Or lest you say, “If only the Scripture had been revealed to us, we would have been better guided than they.” So there has [now] come to you a clear evidence from your Lord and a guidance and mercy. Then who is more unjust than one who denies the verses of Allah and turns away from them? We will recompense those who turn away from Our verses with the worst of punishment for their having turned away.

📖Quran 18:58
And your Lord is the Forgiving, full of mercy. If He were to impose blame upon them for what they earned, He would have hastened for them the punishment. Rather, for them is an appointment from which they will never find an escape.

📖Quran 16:61
And if Allah were to impose blame on the people for their wrongdoing, He would not have left upon the earth any creature, but He defers them for a specified term. And when their term has come, they will not remain behind an hour, nor will they precede [it].

📖Quran 35:45
And if Allah were to impose blame on the people for what they have earned, He would not leave upon the earth any creature. But He defers them for a specified term. And when their time comes, then indeed Allah has ever been, of His servants, Seeing.

📖Quran 11:110
And We had certainly given Moses the Scripture, but it came under disagreement. And if not for a word that preceded from your Lord, it would have been judged between them. And indeed they are, concerning the Qur’an, in disquieting doubt.

📖Quran 20:129
And if not for a word that preceded from your Lord, punishment would have been an obligation [due immediately], and [if not for] a specified term [decreed].

📖Quran 14:42
And never think that Allah is unaware of what the wrongdoers do. He only delays them for a Day when eyes will stare [in horror].

📖Quran 14:47
So never think that Allah will fail in His promise to His messengers. Indeed, Allah is Exalted in Might and Owner of Retribution.

📖Quran 3:178
Sahih International
And let not those who disbelieve ever think that [because] We extend their time [of enjoyment] it is better for them. We only extend it for them so that they may increase in sin, and for them is a humiliating punishment.

📖Quran 19:84
So be not impatient over them. We only count out to them a [limited] number.

📖Quran 30:7
They know what is apparent of the worldly life, but they, of the Hereafter, are unaware.

📖Quran 3:180
what Allah has given them of His bounty ever think that it is better for them. Rather, it is worse for them. Their necks will be encircled by what they withheld on the Day of Resurrection. And to Allah belongs the heritage of the heavens and the earth. And Allah , with what you do, is [fully] Acquainted.

📖Quran 3:196-197
Be not deceived by the [uninhibited] movement of the disbelievers throughout the land. [It is but] a small enjoyment; then their [final] refuge is Hell, and wretched is the resting place.

📖Quran 17:18-20
Whoever should desire the immediate – We hasten for him from it what We will to whom We intend. Then We have made for him Hell, which he will [enter to] burn, censured and banished. But whoever desires the Hereafter and exerts the effort due to it while he is a believer – it is those whose effort is ever appreciated [by Allah ]. To each [category] We extend – to these and to those – from the gift of your Lord. And never has the gift of your Lord been restricted.

📖Quran 14:48
[It will be] on the Day the earth will be replaced by another earth, and the heavens [as well], and all creatures will come out before Allah , the One, the Prevailing.

📖Quran 39:71
And those who disbelieved will be driven to Hell in groups until, when they reach it, its gates are opened and its keepers will say, “Did there not come to you messengers from yourselves, reciting to you the verses of your Lord and warning you of the meeting of this Day of yours?” They will say, “Yes, but the word of punishment has come into effect upon the disbelievers.

📖Quran 67:8-11
It almost bursts with rage. Every time a company is thrown into it, its keepers ask them, “Did there not come to you a warner?” They will say,” Yes, a warner had come to us, but we denied and said, ‘ Allah has not sent down anything. You are not but in great error. And they will say, “If only we had been listening or reasoning, we would not be among the companions of the Blaze. And they will admit their sin, so [it is] alienation for the companions of the Blaze.

📖Quran 67:12
Indeed, those who fear their Lord unseen will have forgiveness and great reward.

📖Quran 19:85-87
On the Day We will gather the righteous to the Most Merciful as a delegation, And will drive the criminals to Hell in thirst, None will have [power of] intercession except he who had taken from the Most Merciful a covenant.

Quran 16;90
Indeed, Allah orders justice and good conduct and giving to relatives and forbids immorality and bad conduct and oppression. He admonishes you that perhaps you will be reminded.

📖Quran 17:15
Whoever is guided is only guided for [the benefit of] his soul. And whoever errs only errs against it. And no bearer of burdens will bear the burden of another. And never would We punish until We sent a messenger.

📖Quran 4:147
What would Allah do with your punishment if you are grateful and believe? And ever is Allah Appreciative and Knowing.

📖Quran 32:19
As for those who believed and did righteous deeds, for them will be the Gardens of Refuge as accommodation for what they used to do.

📖Quran 28:77
But seek, through that which Allah has given you, the home of the Hereafter; and [yet], do not forget your share of the world. And do good as Allah has done good to you. And desire not corruption in the land. Indeed, Allah does not like corrupters.

📖Quran 4:17
The repentance accepted by Allah is only for those who do wrong in ignorance [or carelessness] and then repent soon after. It is those to whom Allah will turn in forgiveness, and Allah is ever Knowing and Wise.

📖Quran 4:18
But repentance is not [accepted] of those who [continue to] do evil deeds up until, when death comes to one of them, he says, “Indeed, I have repented now,” or of those who die while they are disbelievers. For them We have prepared a painful punishment.

📖Quran 32:20
But as for those who defiantly disobeyed, their refuge is the Fire. Every time they wish to emerge from it, they will be returned to it while it is said to them, “Taste the punishment of the Fire which you used to deny.

📖Quran 28:84
Whoever comes [on the Day of Judgement] with a good deed will have better than it; and whoever comes with an evil deed – then those who did evil deeds will not be recompensed except [as much as] what they used to do.

📖Quran 76:3
Indeed, We guided him to the way, be he grateful or be he ungrateful.

📖Quran 18:29
Sahih International
And say, “The truth is from your Lord, so whoever wills – let him believe; and whoever wills – let him disbelieve.” Indeed, We have prepared for the wrongdoers a fire whose walls will surround them. And if they call for relief, they will be relieved with water like murky oil, which scalds [their] faces. Wretched is the drink, and evil is the resting place.

📖Quran 3:32
Say, “Obey Allah and the Messenger.” But if they turn away – then indeed, Allah does not like the disbelievers.

📖Quran 13:34
For them will be punishment in the life of [this] world, and the punishment of the Hereafter is more severe. And they will not have from Allah any protector.